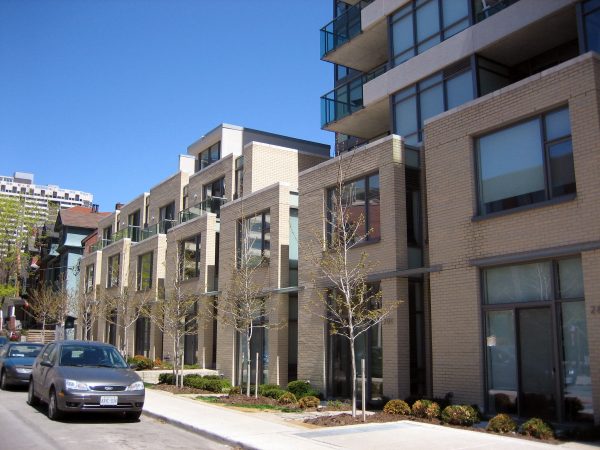 The move seems to be the first policy-ish development to follow from a mid-summer motion by Tory and council’s housing advocate Ana Bailoa. It asks staff to come back this fall with proposals for how to inject gentle density (e.g., duplexes, triplexes, fourplexes, walk-ups, etc.) in house neighbourhoods where such dwellings have long been banished, thanks to the witch’s brew of exclusionary zoning rules, out-of-control NIMBYism and real estate speculation. These areas account for about 70% of the city’s land-mass, and many have been losing population for years. (Correction: the lands zoned for detached residential dwellings account for about 70% of the area of the city designated for residential uses.)

The mayor’s political signaling here seems clear: if the City is going to tiptoe into the minefield of neighbourhood intensification (beyond legalizing secondary suites and laneway housing), it’s going to do so in a way that delivers architectural and planning quality.

After all, what could be more soothing to hysteria-prone councillors and the anxious residents’ groups that yap at their heels than an exercise meant to showcase “innovative” low-rise housing ideas from the design community.

I’m certain Tory’s call will generate all sorts of compelling examples. My question is what the City plans to do with all the ideas that come over the transom.

The planning department loves design guidelines, and it’s not hard to imagine City officials getting to work on a set for low-rise housing, to accompany the zoning and official plan reforms that will be required to achieve Tory’s vision.

For going on two decades, these documents have been created for tall buildings and mid-rise, as well as townhouse clusters, retail and privately owned public spaces. Though such guidelines lack the regulatory heft of an official plan amendment or zoning bylaws, developers know they’ve got to tick off those boxes if they hope to avoid an expensive fight with City Hall.

On their face, design guidelines articulate those softer built form principles that seem to promise both progressive and orderly development (e.g., “drought-tolerant landscaping,” “bird-friendly” buildings, “effective lighting”). But local developers and many in the planning profession also know they come with a range of unintended consequences, at least some of which have either backfired or undermined the broader city-building goals laid out in the Official Plan.

The sorry tale of mid-rise development is probably the most notorious example. Since amalgamation, the city’s goal was to line the so-called “avenues” with as-of-right European-style apartments that can provide the density required for higher-order transit as well housing options and critical mass for at-grade retail.

What’s not to love? However, over two decades on, this urbane vision of growth remains woefully under-realized, at least in part because of an accumulation of intricate planning rules and design guidelines — the City’s 2010 mid-rise design guideline report runs to 74 pages, with a “performance standards” addendum approved in 2016 — that produce so much regulatory over-burden that developers have compensated by pushing for more height and density than the City ever envisioned. (We asked for Berlin and got mid-town Manhattan instead.)

For example, the angular plane requirements – ostensibly meant to ensure that main streets don’t become shadowy canyons and homeowners living behind such projects aren’t tormented by “overlook” – force developers to design buildings with complicated and expensive infrastructure, even while forgoing marketable space. (Never mind that there are hundreds of older mid-rise buildings in the city that are basically five- to ten-storey boxes, and which co-exist with their two-storey neighbours perfectly amicably, with no appreciable impact on property values.)

Meanwhile, at grade, those midrise buildings that have been developed often come fitted out with excessively large retail floor-plates, which means they’re economically out of reach for smaller businesses. Despite all sorts of prescriptive language about urban design (set-backs, façades, etc.), these policies seem to have produced a lot of over-priced condos that tend to be on the tall end of mid-rise, with dreary podiums whose commercial spaces are leased mainly to chains and clinics. It’s all a far cry from the lively street frontage promised on the packaging.

As council turns its attention to the business of promulgating missing-middle zoning, I’d like to think the city’s planning department — which is filled with smart and urban-minded people — will spend some time reflecting on the mistakes of the past, and in particular the structural short-fallings of the Avenues policies. After all, what’s being proposed in the Tory/Bailao motion could become the most significant shift in the city’s approach to residential planning in decades, so I hope the planners drafting the policies go back to first principles instead of defending sacred cows:

Don’t re-invent the wheel. There are hundreds if not thousands of such dwellings in this city, and countless more in other North American cities, including Montreal and Vancouver (the Plateau’s superposed flats and Vancouver specials, resp.). Some are interesting and snazzy; others are workmanlike background buildings. They all work. The City shouldn’t be slyly choosing which form it prefers in the guise of design guidelines that aim to mollify residents associations or the character police.

Be mindful of exclusion. We surely understand by now how well-intentioned regulations and guidelines can inadvertently accelerate socio-economic or racial sorting. The goal here is to add some density and more housing options in neighbourhoods that have priced out all but the one percent. If the new policies don’t meet that red-line test, they need to be jettisoned.

Less is more. One shouldn’t require a small army of planning and design consultants to see through one of these projects; indeed, I’d argue that if the City’s eventual missing middle policy book forces small contractors or homeowners to lawyer up, it’s failed on its face. The point is to make these kinds of ventures easy, not difficult (see also: principle two).

Use fiscal tools to promote, as opposed to frustrate, a major planning goal. Council never provided mid-rise developers with any sort of financial incentive to build those desired mid-rises, despite their starring role in the Official Plan. So why not correct an obvious mistake? Council could, for example, waive development and parks levy charges on all missing-middle projects for a finite period, (ie. the duration of one official plan cycle of five years), as a means of priming the pump. The incentive would be explicitly time-limited in order to focus the attention of smaller contractors, and the consequence would be a critical mass of new projects that will, in the aggregate, generate market momentum.

Recognize that vested interests always oppose change. There’s such a thing as too much consultation and deference to incumbents. In a successful city like Toronto, residential real estate prices have been defying gravity for years, and a little additional density in house neighbourhoods won’t change that story one bit. Specious complaints about the impact of missing-middle developments on nearby property values should be discounted, not by political practice but rather through regulation. Council should pass rules that approve these kinds of housing projects as-of-right. After all, many of our most vibrant neighbourhoods took shape without providing every homeowner a veto over what was going on down the block.

My broader point is this: we all know what a generation of regulatory mission-creep looks like, and what it produced. History needn’t repeat itself.

In the coming weeks, Spacing will publish a series of columns by architects and planning experts offering up their own advice about how City officials should think about this important shift in our residential planning rules. We’d also like to hear from Spacing readers. Stay tuned.