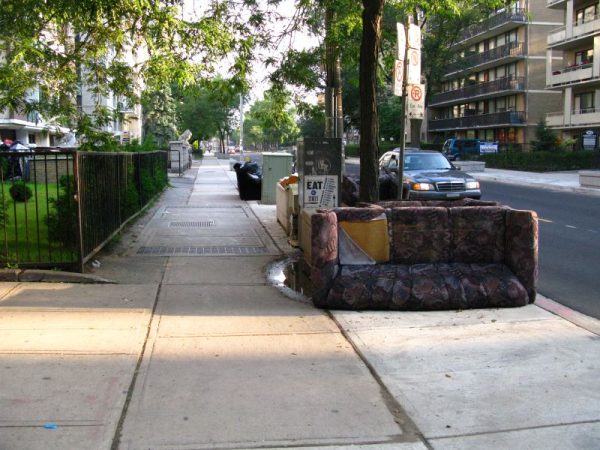 Last week, I learned that my landlords had succeeded in evicting me from my apartment in Parkdale, a beautiful but not inexpensive flat on the second-floor of a house. What follows is — by my reckoning anyway — the somewhat ridiculous story of how this happened.

I’d actually rather not have to get into all the details at this point, but thought it worth sharing as the ruling in my case could have implications for other renters in Toronto who have ever let out their place using Airbnb.

Even if you’ve done so only sparingly, even if think you have your landlords’ permission, even if you’ve never had a single complaint.

It’s worth noting that the ruling in my case played out in the midst of hearings before the Local Planning Appeal Tribunal (LPAT) on Toronto’s proposed new short-term rental rules. My situation, as I understand it, would have been entirely within the new rules had they been implemented in June 2018, as was planned. Ironically, it was a legal appeal supported by Airbnb that put the new rules on pause. (The hearings have wrapped up but the ruling hasn’t been issued.)

Two-and-a-half years ago, before heading out on a research trip to Turkey, I asked my landlords if it would be okay for me to let out my place while away. I was told it was fine, as long as I assumed responsibility should any problems arise. Since then, I’ve “Airbnb’d” my place about a dozen times, charging a modest $100 to $120 per night to help offset my costs. As hinted above, I have never received a single complaint from my neighbours or the landlords; no one has asked any questions or raised any concerns.

The landlords were often made aware when I did have guests, so they wouldn’t be surprised by strangers milling about the house. (In one instance, I arranged for my guests to let the landlords into my flat so they could check an electrical issue.) Basically, I was transparent and took every precaution possible to ensure the apartment and my neighbours were treated respectfully, with two friends on hand to address any problems in my absence.

While visiting Berlin this past June, I Airbnb’d my place for three nights. It was the first time in eight months that I’d had guests. But within a couple days of arriving home, I received an eviction notice from my landlords, on the grounds that I had contravened a city by-law by running an “illegal business” out of my unit. (If you read the specific form they used, it normally applies to situations when the tenant is running an illicit drug operation or some other for-profit commercial enterprise precluded by the area’s zoning.)

When I tried reaching out to the landlord, I was directed to their legal representative. They had no interest in mediation, in talking it out, or in taking up my offer to cease hosting guests. Until this incident, my relationship with the landlords had been cordial and trusting. They were among the better landlords I’d ever had and I’d never given them any cause for complaints. Suddenly, they were demanding the Landlord and Tenant Board (LTB) enforce an eleven-day eviction order, as though I was putting my apartment in some grave, imminent danger.

My LTB hearing took place in early September. My landlords’ legal representative doubled down on the “illegal business” argument, the crux of which was that I was charging guests, at $100/night, more than the permissible amount.

My understanding of the bylaw had always been that you couldn’t make a profit against the totality of one’s monthly rent. In other words, I couldn’t rent out the place for an entire month, or much of the month, and charge more than what I was paying, which seems entirely reasonble. According to the landlords’ interpretation of the by-law, however, the LTB should consider not the totality of the month, but the per diem rent. My per diem rent is about $76; I charged $100/night. By that measure, they argued, I was running an illegal business; never mind if it was only one night, three nights, or a hundred… or even that I was transparent about hosting guests, never received a single complaint, or that the landlords had initially given me permission.

The LTB took almost 30 days to issue a ruling, and found in the landlords’ favour. It wasn’t the worst-case scenario: the landlords kept insisting they wanted me out in 11 days, but the adjudicator has given me until the end of January. So it’s manageable.

But the decision still seems preposterous. To sum up: I am being evicted because I supposedly made an illegal profit of $68 from hosting a single guest over three nights in all of 2019. (And to be clear, I never even made the equivalent of a months’ rent in an entire year of using Airbnb; the income was marginal.)

If anything, $100/night is at the low end of what Toronto AirBnB owners or renters charges. If my case were to serve as any kind of precedent, then any renter Airbnb’ing their place for more than their per diem rent — no matter the number of nights, or how responsible a host they are — is now vulnerable to eviction. Just scan the prices for Airbnb stays in Toronto; I’d be surprised if any renter in Toronto is listing their place for less than or the equivalent of their per diem rent.

I am fully aware of the many problems caused by Airbnb in different cities. I am entirely sympathetic to a lot of the complaints levelled at the company and how this service is sometimes used (ie. to run ghost hotels). Pitted against those issues is the increasingly exorbitant cost of housing in this city, which no one is really doing anything to solve.

I’m not going to get into all the pros and cons here, other than to say that for many of us using Airbnb responsibly, it is a modest means of helping make ends meet when we are away.

I’m still taken aback by my landlords’ sudden change in disposition. I thought they were decent people. If they had an issue, they always could’ve talked with me. Of course, I can’t help assuming it’s about money. Last fall, when the basement tenants moved out, the landlords told me they were hoping to charge $1,950 for the unit after some renovations. My apartment costs only slightly more, but is many times larger and more comfortable. (It is also above ground.) I’ve lived here for more than four years now, and in Toronto’s nutso rental market, the landlords could easily have charged several hundred dollars more than what I’m currently paying. (The average price of a one-bedroom apartment in Toronto is now $2,300.)

There is the possibility of appealing the ruling to Divisional Court, or requesting that the LTB review its decision. I haven’t decided yet what to do. As much as I love my place, it might be time for me to move on anyway. Though the principle grates. I can’t count the number of people I either know personally, or have heard of second-hand, who have faced eviction in the past year — especially around where I live in Parkdale. Mention you are going through an eviction process and someone will come back at you with their own story, or one of someone they know.

As for that $68 in profit I’m spending it at The Skyline.