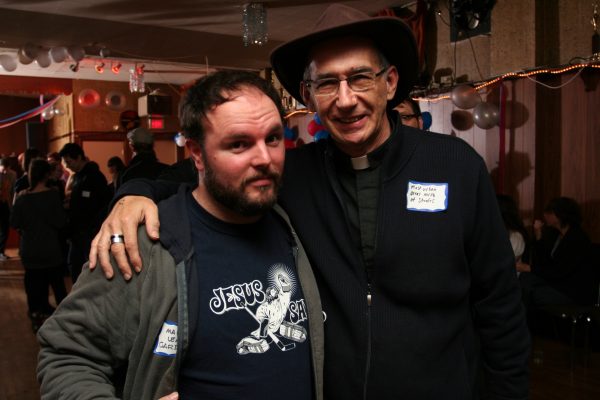 In 2004, I was introduced to Pier Giorgio DiCicco, then recently unveiled at the City of Toronto’s poet laureate. Little did I know that I’d spark up a great friendship with a Catholic priest despite me being a raging atheist. Over the years, Giorgio would call me up and we’d go for a slow drive through the city’s neighbourhoods talking about the nature of city-building. Giorgio sadly passed away on December 22, 2019.

I will be speaking, along with a long list of of Giorgio’s friends and Toronto city-builders (including Spacing‘s Shawn Micallef), at a memorial next Tuesday. Below are the details of the event as well as a piece he contributed to Spacing from our Fall 2007 issue.

Join current City of Toronto Poet Laureate Al Moritz and many friends and colleagues as we celebrate the life of Pier Giorgio DiCicco who passed away on December 22, 2019

After the many seductions, logical and visionary, have been played — I shall make a plea for the salvific aspect of the act of walking. Yes, salvific. Not just to save the environment, but to save ourselves, and not just by regarding the environment.

We will not save the environment until we have found a reason for living together. Until we discover civic care in each other, until we restore the city to its definition as a place of unexpected intimacies, not just as a place of amenities, convenience, business, and entertainment, we will not have sustainability. For sustainability is about replacing an ethic of entitlement with an ethic of sufficiency. And sufficiency is what we find in each other. In an era that glorifies independence and even inter-dependence we are shy of admitting the awful truth: that is, we are dependent on each other, not by connectedness, but because we are one body breathing the same air. It is not cars that are the enemy of the pedestrian. The enemy is the absence of civic communion, the lack of empathic citizenship, our inability to see cohabitation as that place where we enjoy ourselves, by enjoying others. All human traffic is under siege, because it is becoming increasingly purposed, guarded, and negotiated. The body is not just a means of locomotion. It is our chief means of restoring a city to its raison d’être, its purpose. And that purpose is civil encounter.

Pier Giorgio DiCicco, Poet Laureate of the City of Toronto

author of Municipal Mind: Manifestos for a Creative City (Mansfield Press)
– text edited from a speech at the Walk21 conference, October 2007, in Toronto