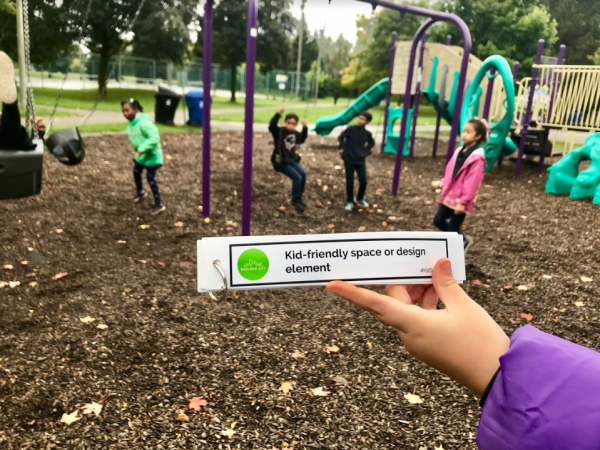 In the world of city planning and design, there are tools for measuring everything from the number of vehicles passing through an intersection to the walkability of a location. These tools are important because they give policy- and decision-makers the information they need to make choices that shape the places where we live, work and play based on evidence, not whim.

As the saying goes, “In God we trust, all others must bring data.”

In 2017, our team at Maximum City set out to develop an evidence-based tool for measuring the child-friendliness of urban places. The child-friendly cities movement is an increasingly urgent initiative of architects, planners, researchers and policy makers around the world, all of whom are wrestling with the critical question of what kind of urban childhood we want the next generation of city dwellers to have and to what extent children’s voices and participation will inform the answer.

Recently, the City of Toronto established Child Friendly TO, an interdivisional team tasked with applying a child-friendly lens to the work of departments such as Public Health, Planning, and Parks and Recreation.

As part of this initiative, we created the KidScore for ages 6-12 and YouthScore for 13 and up to help assess the child-friendliness of neighbourhoods. What’s unique about these tools is that the criteria and scoring index were developed and tested with the help of kids and teens over a two-year period. The resulting survey questionnaire, which kids complete after a short walk in any urban location, produces an overall KidScore out of 100, and five subscores rating child-friendliness in different categories such as Traffic and Mobility, and Safety and Well-Being. These data — crowd-sourced at various locations and aggregated citywide — can reveal where neighbourhoods are not meeting kids’ needs, and inform better planning and outcomes to meet those gaps.

In 2019, Maximum City conducted a pilot of the KidScore for City of Toronto Children’s Services to assess the child-friendliness of nine Toronto communities, with child engagement and child well-being informing the process. The results are now visualized in an interactive map, as well as described in detail in a report. The findings are affirming in some ways, but also counterintuitive and confounding in others. 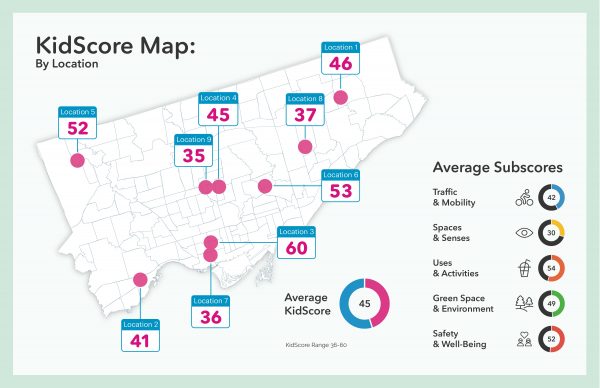 The average KidScore across the nine assessed Toronto locations was 45 out of 100. This low average, which tells only part of the story of what kids saw and felt, will no doubt be surprising to some, since Toronto has a reputation as a livable and welcoming city that regularly appears in rankings of the world’s best and most desirable metros. While this reputation may be deserved, one of the key lessons we learned from conducting the City of Toronto KidScore Pilot was that some adults’ experiences in, or aspirations of, a city or neighbourhood tend to be quite different than those of children. Simply put, kids have unique knowledge and experiences of cities that other groups don’t have.

The highest neighbourhood KidScore was 60, attributed to the Bathurst and College area, located within the Kensington-Chinatown community downtown. Kids in this location appreciated the mix of public spaces, the variety of affordable shops and places to eat, the ease of walking and biking, and the ready access to transit. While this area was not always clean or well-maintained, kids enjoyed the many places to sit and hang out, as well as all the people they saw in public. This area made kids feel safe and welcome, and gave them a strong sense of independence.

The lowest KidScore was 35, recorded for the area near Avenue Road north of Eglinton Avenue, located within the affluent Lawrence Park South Neighbourhood. Kids felt that this location was neither welcoming nor friendly. This low score may be surprising since the area is considered highly desirable by some adults, and has the highest neighbourhood median household income of any of the assessed locations. This community, however, has several attributes that were major negatives for kids. Kids felt there was little to do in the area, found shops and eateries to be unaffordable or unwelcoming, and did not feel safe walking due to wide roads, the speed and volume of traffic flowing adjacent to narrow sidewalks, construction, and poor pedestrian infrastructure.

In the coming weeks, we will continue to write about the findings and lessons learned from the City of Toronto KidScore Pilot. We are also working on a version of the KidScore that can be used during this period of social distancing. More info can be found at maximumcity.ca/kidscore