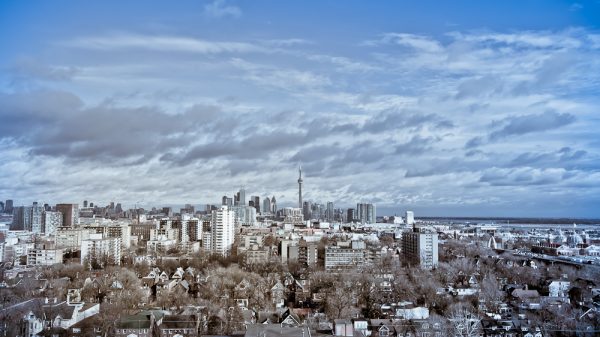 Outside our locked-down doors, Canadian mayors are wielding emergency powers. City bus drivers are literally risking their lives to help travellers get from A to B. With or without protective gear, City social workers kept meeting at-risk clients through the crisis. Meanwhile, the sirens you hear in the clear air outside are fire/paramedic teams, many of them moving COVID19-infected patients to hospitals in ambulances.

The risks and burdens of local government in this crisis are surely obvious to most. But if you read the work emerging from a few corners of Canada’s public policy establishment, you might just forget that cities are a part of this national emergency at all. For example, consider the April 7 bulletin from C.D. Howe’s ‘Crisis Working Group,’ which made four different recommendations to help provinces get through the crisis — and literally didn’t acknowledge that municipalities exist.

Or consider the April 8 op-ed from Policy Options on how our intergovernmental system is handling the crisis, in which cities mysteriously don’t have public health officers, and the heavy local financial hit isn’t even worth a token nod.

Why haven’t we heard more about financial help for cities amid the crisis?

First, official Ottawa has rightly prioritized support for hibernating small businesses, the unemployed, and those fighting the pandemic itself. Mayors have also been politely biding their time because they have bigger problems of their own too — and in the short term at least, most Canadian cities have cash reserves in place for moments like this. For now, cities are either borrowing against reserves, drawing on them, or both.

In contrast, federal and provincial governments are spending big because they can, backed with dirt-cheap long-term debt. Canada is borrowing at less than 0.7% on ten-year bonds right now, while the provinces were borrowing on private markets at 2 to 4% for 20 to 30 year terms before the crisis, depending on their own balance sheets.

There’s a real risk that private buyers can’t or won’t buy all of the new crisis debt quickly enough, which is why think tanks like C.D. Howe are calling for the Bank of Canada to step in and acquire provincial long-term debt alongside the federal bonds and short-term provincial debt it’s already buying. This is, essentially, printing money. Few are complaining because the economic shutdown means inflation risks are low in a shuttered economy.

If it’s true that provinces need help to ensure that financial risks don’t distract them from the pandemic fight, it’s hard to understand how anyone can’t see so many cities shivering in the same lifeboat. Even if municipal borrowing constraints didn’t pose their own problem, damage to local revenues should be enough to tell the other side of that story.

Some provinces are projecting revenue losses of anywhere from 5 to 10% compared to last fiscal year. Even if these estimates are optimistic, the range is useful for what it tells us about comparative risks. Suppose that every single Toronto property taxpayer pays their taxes before our December 31st year-end; every Toronto Parking Authority metre makes its revenue target; and the land transfer taxes collected hit the amount budgeted (an absurd scenario under present conditions). Even if all that happens, Toronto’s total revenue intake is already shrinking within that same 5 to 10% range, just from losses from fares for transit — an essential service the City can’t (and shouldn’t) shut down.

What does the burn rate look like for reserves in this environment? In my old budgetary stomping ground in Winnipeg, cash on hand at the beginning of the crisis was roughly comparable to the paper value of its general reserve, or just under $110 million. Even with some preliminary spending cuts, and assuming steady payment of taxes by everyone who can afford it, the City of Winnipeg is already projected to lose half of that cushion by July 31. Remember that after the pandemic, municipalities still need reserves to ride out any economic shock on the other end.

In the absence of proactive assistance, city budget leaders face four choices to manage this risk, none of them ideal. They could lay off workers and slash capital projects. Some cities – like Edmonton – are already starting down this road. Reversing layoffs may be easier, but we will want more capital projects on the books, not fewer, to boost any recovery.

Alternatively, cities could short-term borrow their way into a deficit, which legally means a brutal 2021. Unlike provinces, cities aren’t allowed to amortize shortfalls past the next budget year. Mayors could plead individually for provincial aid, as Vancouver’s Kennedy Stewart did on April 8th, but this creates follow-on problems of time, equity and cost. Finally, councils could simply plan early for big 2021 property tax hikes, but much of that burden will fall on retail businesses at the precise moment we’re begging them to reopen.

I texted a few fellow policy hacks to try to understand why business or labour groups would call for urgent provincial aid, but not do the same for cities. One person replied by insisting that calling for Bank of Canada purchases of long-term provincial debt was “already a huge step.” Apparently, specifying that cities might also need help was somehow just too constitutionally gauche, too bridge-and-tunnel-crowd, too Montgomery Tavern to be considered polite for Canadian crisis wonkism.

Given the way our country talks about cities, some pundits may even simply assume that aid for provinces and aid for cities is essentially the same thing. I’d have hoped that at least a quarter-century of snail’s pace infrastructure funding had taught us by now that the fastest way to slow down federal assistance to cities is to start negotiating with provinces one-by-one on how to spend it.

If this all seems harsh, remember that even the circus that is the Trump-era United States Congress has already included direct aid to cities up-front in their first aid package. American municipalities are already eligible to access most of a $500 billion relief fund. And if debt liquidity is your fiscal medication of choice, the U.S. Federal Reserve began buying short-term municipal debt as far back as March 20 – more than two weeks ago! – and it moved on Thursday to loan $500b exclusively to large US city and county governments.  Remember: American cities get just as many column inches in their constitution as we give cities in ours, namely, none whatsoever. One country’s “huge step” is another country’s existing intervention.

As the debate about potential inter-governmental assistance begins, it’s important to recognize that the municipal lane of the CIVID-19 crisis is a single, similar crisis from coast-to-coast, and best attacked as such. And anyone who has been watching the rise and fall of relative debt-to-GDP ratios of the different levels of government knows the financial power to attack that crisis is found most easily in one of two places: Parliament Hill, or the Bank of Canada.

If you’re out there proposing federal COVID-19 aid to provinces – needed, useful and urgent, in whatever form – it’ll save us all some time if you add “…and cities, too,” as you go.

Brian Kelcey is an urban policy consultant. He previously served as budget advisor to the Mayor of Winnipeg, and as a senior political advisor at Queen’s Park. He can be reached on Twitter at @stateofthecity.