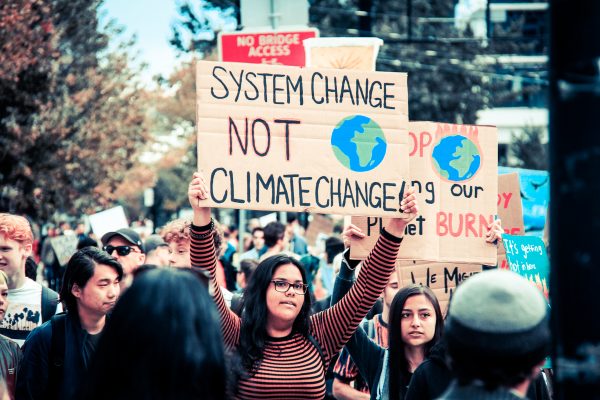 Happy Earth Day! Although in these strange days of self-isolation, it may feel more like Groundhog Day than Earth Day, here we are. While our news tilts significantly to COVID19 stats and questions about when we will all get to return to some kind of lives outside our homes, many people are also asking: Can we focus on the immediate challenge of COVID recovery while at the same time ramping up our climate change response?

The answer on this 50th anniversary of Earth Day needs to be an emphatic ‘yes.’ We can do the planetary and local governance equivalent of walking and chewing gum.

Signals that there is still hope

The pre-pandemic era seems like so long ago, but it really wasn’t. The rapidity with which our current situation accelerated is matched by the joys of seeing how quickly parts of our ecosystem responded. The disruption of marine traffic in the Mediterranean coincides with the return of the rare rorqual whales near Marseille, France.

With the safari tourists gone, lions are napping on the roads in Kruger National Park in South Africa. Worldwide and locally, air quality improvements and greenhouse gas emission reductions are being reported due to a significant reduction in air travel, industrial production and automobile use.

It’s time to start thinking about how we can move faster to turn these improvements into the new normal.

Out with the old

NYU Stern Business School professor Scott Galloway recently talked about how the pandemic is a time to get rid of our bad habits and he’s absolutely right. While we’re all stuck in this holding pattern, we have a real opportunity to ask ourselves which bad habits need to be moved to the trash can?

Given the economic aftermath of this pandemic, we can expect the return the specious argument that we can’t afford to green the economy. Rubbish. We can’t afford not to. This pandemic offers a once-in-a-generation opportunity to prioritize infrastructure investments that are climate friendly and deliver more inclusive outcomes for more people.

The New Green Deal’s focus is on prioritizing funding to projects that offer decent pay for decent work; tackle climate change action; directly address issues of social and economic exclusion; and focus on measurable impacts and benefits for communities.

Given the amount of government stimulus funding on the table, we have a real opportunity here to invest in projects with multiple benefits. Economic investment in infrastructure will yield economic outcomes. Strategic investments will yield multiple benefits for communities and ecosystems. We can do better than just putting people to work resurfacing roads.

As municipalities face significant deficits, their capacity to spend on capital projects will be challenged. The federal government investments matter now more than ever. It’s time to make public money work harder.

Here’s a real example that is Toronto based. Building Up is a local organization that provides hands-on skills training to people who have been challenged to find other work to do water efficiency upgrades, labour and general contracting (funded by the Ontario Ministry of Advanced Education and Development, the Metcalf Foundation [full disclosure: the author is a Board member], the Toronto Enterprise Fund/United Way, and Tridel – Bolt).. The group’s projects provide training, good work, and improved environmental performance, which leads to economic benefits for the people using their services and the communities where the employees live.

Building Up’s clients include Toronto Community Housing, which means that the residents gain access to better quality infrastructure. Because there are cost savings per unit with reduced water bills, clients and government rent-support partners are also saving money.

More generally, when Ottawa turns the taps on its infrastructure fund, we will need to prioritize projects that embed such partnerships, where shovels in the ground leads to expanded good work, better environmental performance, local community economic development benefits and longer-term, more sustainable infrastructure.

Pause, think, talk together and do

When people think about Copenhagen, many think about groovy design, beautiful people and bike paths for kilometres. Its livable urban form is so embedded one might think it had a long history.

But how many of us knew that in 1993, Copenhagen was nearly bankrupt? The city’s economic crisis meant very there was a long pause put on new building and design projects because the funding wasn’t there.

What happened next? Copenhagen used this time to buckle down to think hard about the city it wanted and needed to become. One of the priorities that emerged was a desire make the city more bicycle friendly. The city developed plans so when the economy began to rebound, it could begin the design and building process. Now, 27 years later, Copenhagen’s livability is the envy of many.

Rightly, there are many bright minds turning their attention to COVID19. If people have expertise that is useful, they should focus their attention on COVID19 response. But we also run the risk of too many cooks in the kitchen. It is also important for people with relevant expertise to stay focused on bigger picture urban challenges, like affordable housing delivery, improved mobility and continued action on the climate emergency.

When we take action moving forward, we need to prioritize projects that deliver on all of these fronts.

For those of us working on community life after COVID19, and as we reboot what think and do in the city, it is imperative we put inclusion at the centre of our efforts. In the time before COVID19, environmentalism was too often the domain of white people in rubber boots. Urbanism discussions failed to truly recognize the tremendous gaps in equity across our city. In her recent essay for Azure Magazine about urban density, Toronto placemaker, urbanist, and Spacing contributor Jay Pitter wrote:

Instead of being fearful of increased anti-density bias, we need to apply what we know toward a good urban density framework. This framework should be evidence-based and overlap with social determinants of health, such as food security, race, gender and poverty, while being anchored in a strong equity-based placemaking paradigm. It should be co-created through meaningful engagement with urbanists, public health professionals, community members and other stakeholders.

In civic life after COVID19, the new environmentalism and urbanism needs to be powered by diversity and it needs to have traction on issues that matter to a wider range of people. Those goals aren’t easy but they need to happen. Decisions about how to reduce emissions and how to implement climate resilience strategies must actually recognize the lived experiences of all of us and build from these strengths. If we don’t, our next steps will continue to exacerbate inequity and undermine our collective civic foundations.

Rebecca Solnit, in her 2009 book Paradise Built from Hell, wrote: “If paradise now arises in hell, it’s because in the suspension of the usual order and the failure of most systems, we are free to live and act another way.”

While none of us would have chosen the situation we currently find ourselves in, here we are. The time of COVID19 has shown us all that when we really need to, we can think and work together in quite different ways.

Beware those who suggest the pandemic gives us a hall pass on tackling the climate emergency. It does not and it must not. Instead, we need to pivot our thinking. One of my favourite verbs in French is profiter: availing ourselves of an opportunity. If we play our cards right, after COVID19, nous pouvons profiter with a greener, more inclusive future.

Conversations about COVID and Climate Change are timely. The Canadian Urban Institute held a panel discussion on Tuesday April 21 and its CityWatch, CityTalk and CityShare COVID19 platforms are excellent resources for people interested in community efforts. Ryerson’s City Building Institute, in partnership with the Urban Land Institute-Toronto, is hosting a panel on the Future of Cities: The Future of Climate and City Building on April 22 at noon. This is the link to register, and a video will be posted after the event.

Pamela J. Robinson is a contributing editor to Spacing and the Director of the School of Urban and Regional Planning at Ryerson. Follow her on Twitter @pjrplan.