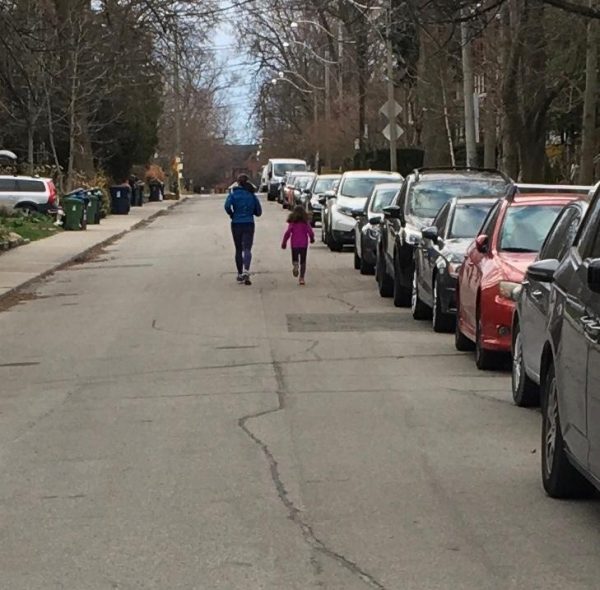 On my long morning dog-walk the other day, a woman and her tween-age daughter jogged past me. I was walking down the middle of the road, which was also where they were running. It was rush hour and this street – a residential block in the not-too-west-end – would, in another era, have been busy enough to dissuade such craziness. But there’s not much rushing these days, and now the street is, well, there for the taking.

This is hardly the only time I’ve seen pedestrians reclaiming the spaces between the sidewalks. Last week, I saw two girls playing a balancing game on that odd strip of yellow paint that runs perpendicular from a stop-sign. Unsupervised, no less! Another day, a guy was jogging north in the south-bound curb lane on Bathurst. There are people with dogs and kids, on foot or bikes, ambling on the road — in broad daylight.

My god, the horror.

A growing amount of irritated talk is percolating about how the City of Toronto is becoming an outlier when it comes to re-purposing now under-utilized road allowances to permit more appropriately distanced outdoor activity. As Oliver Moore reported in the Globe and Mail earlier this week, many international cities have been pushing to re-think their streets, while most Canadian cities have done little if anything. Toronto, as ever, is at the back of the back. Even Brampton is more proactive.

Former New York City transportation commissioner Janette Sadik-Kahn told The Globe, that the pandemic “offers us really this once-in-a-century chance to change course and undo some of the damage of a century of car-focused street design.” She spear-headed the move to transform many of Manhattan’s worst intersections, including a chunk of Times Square, into pedestrian zones.

Absent any kind of constructive municipal action, and with a growing number of established public spaces now declared off limits, it seems likely that the number of bodies wandering in the streets will only increase in the days and weeks to come.

My question is whether the City will be able to put the pedestrian toothpaste back in the tube after the pandemic ends. After all, this whole walking thing could become habit-forming.

I’ve always tried to resist the false dichotomy that the City is divided into these warring camps – people in cars, people on foot or bike. The reality is that the middle of the Venn diagram is a large space. But as the pandemic restrictions wear on, the experience of informally using streets for non-vehicular purposes has  expanded, as has the pleasant sensation of not fearing for your life when you cross one.

I’m not under any illusion that when the City finally sounds the all-clear, the traffic and the speeding won’t come, ugh, roaring back. But I do wonder whether our collective exposure to a more peaceful kind of pedestrian experience will produce a shift in our transportation politics and practices. It should. I wouldn’t make a big bet on this outcome, but I don’t think it’s impossible, either.

As with most things urban, the history is not only relevant but often determinative. Toronto’s relentlessly rectilinear street grid, as architect John van Nostrand reminds us, is the handiwork of 19th century British surveyors, who had little use for public or civic spaces.

Our signature parks were created thanks to the munificence of rich men or carved, grudgingly, out of the urban fabric. Some are made from garbage heaps or construction rubble, while others took hold in the leftover and unloved ravine spaces that hadn’t been pressed into service as quarries, railway corridors or highways. Plazas, squares, and pedestrian-only zones have never been part of the city’s civic language. They don’t move the mercantile ball down the field.

It’s not especially surprising to me that even progressive politicians in Toronto have, during this pandemic, declined to advocate for a more balanced and less punitive approach. The city’s tradition of full-throated public health advocacy stretches back a century — an impressively durable and progressive legacy. But its roots can’t be completely untangled from the city’s bedrock moralism. Purifying the water and eliminating the sources of infectious disease, in milk or meat, was also about elevating the poor and cleaning up slums. Such investments were productive, both commercially and morally.

By contrast, I suspect the ghosts of the old Methodist city fathers enjoy rattling the doors when we have the temerity to talk about using public space qua public space because there’s no constructive, and possibly profitable, goal at the other end of this activity. Less abstractly, the street grid remains a vehicle, pun intended, for the enabling of commercial activity. All cities understand that fact. We just elevate it to the status of sacred creed.

All the Jan Gehl-produced lessons about how pedestrian-only streets promote, as opposed to inhibit, activity and commerce have to be re-learned with each new application, and this interregnum is no exception. Indeed, the very logic of justifying pedestrian-only or transit-prioritized spaces by proving they’re good for shopping testifies to the city’s enduring suspicion about idleness.

The vehicular logjams have always been there, going back to the earliest days of the car, and the congestion has never really abated, despite the gazillions we’ve spent, and continue to spend, on highways. But perhaps the streets shorn of purposeful traffic will finally change us.

Power, as the old saying goes, abhors a vacuum. The people jogging down the middle of the road at rush hour are reclaiming something that, frankly, always belonged to them. We are the city, and the City must now recognize that its residents, hemmed in as they are by this pandemic, are finally staking a claim.