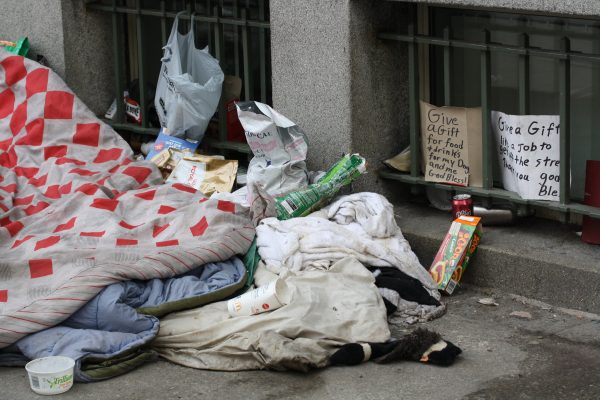 On April 8, Dr. Eileen de Villa, Toronto’s medical officer of health, and Mary-Anne Bedard, general manager of the City’s shelter, support and housing administration (SSHA), held a daily briefing on the status of COVID-19 in the shelter system.

At that time, there were a total of eight reported cases. As of yesterday, just under three weeks later, there are 213.

During that briefing, Bedard announced a number of measures being implemented by SSHA to mitigate the spread of the novel coronavirus among the homeless. Those included “… creat[ing] physical distancing in our respite [sites] by rapidly opening programs in community centers” and providing “funding for community agencies (presumably homeless shelters) to allow them to enhance their hours, enhance their staff wages and purchase PPE.”

Bedard also announced that homeless shelters would be provided “with communication materials and tools to help educate their staff and clients.” During the briefing, she did not elaborate on the content, but we can presume they included at least some information about how to conduct screenings for Covid symptoms and what to do when a likely case was identified.

But how effective are communication materials and infection containment tools, and how well are they being implemented?

According to street nurse and activist Cathy Crowe and other homeless advocates, not very. “Screening is very lax at the [homeless shelter] doors,” says Crowe. “People are sleeping within two-and-a-half feet of one another.” At any rate, the efficacy of screening is questionable at best. Many cases of COVID-19 are asymptomatic and 95% of cases involving symptoms are mild, and similar to those of the common flu.

Advocates question the speed at which people are being moved into hotel rooms. According to public health authorities, self-isolation for those who test positive is required to prevent the spread. So procuring separate rooms for shelter residents who are either recovering from COVID-19 or have tested positive essential.

According to a backgrounder prepared by the City, eleven hotels have been secured with more than 1,020 rooms for physical distancing, as well as one hotel for an isolation program with 200 rooms.” However, only seven of the eleven hotel locations are operational and to date only 490 people have been moved into hotels for physical distancing. In response to homeless advocates’ concerns that shelter residents are not being moved to hotels quickly enough, Bedard replied, “There are significant logistics involved” and added that the city has developed “a complicated transportation plan.”

Bedard gave no indication as to exactly how long this plan will take, saying only that SSHA officials “are moving people as quickly as [they] can.” She also assured advocates that the SSHA has “been working really closely with [their] partners in health care both to ensure that they’re taking appropriate steps at all their shelter sites…in the creation of some very unique programs that provide a place for people to self isolate the waiting for test results.”

That statement, however, fails to account for any positive cases missed by the screening process. Nor does it suggest any particular urgency in expediting those “unique programs” to ensure that shelter residents are moved more quickly into hotel rooms.

The SSHA’s primary partner in health care is Toronto Public Health (TPH). During a recent briefing, a reporter asked whether de Villa would be ordering homeless shelters to implement social distancing measures. The question was originally posed by Crowe, who suggested such measures as “the 6′ distancing of beds rather than the typical two-and-a-half feet…[and] stopping the use of bunk beds.” “At this stage,” de Villa replied, “there doesn’t appear [to be] any merit or need for [such] an order to be given.” She added that “effective public health measures are best done on a voluntary basis.”

Just over two weeks after de Villa declared social distancing non-mandatory in homeless shelters, they are now experiencing a spike. On Last Friday (April 24), TPH confirmed via email that there were 135 cases in the shelter system, 88 of which occurred in the Willowdale Welcome Centre, which is a shelter for refugees. Over a hundred more cases have been identified since then.

In the same email, a TPH spokesperson said that only  “staff and residents have been tested in [those] shelter settings where an outbreak has [already] occurred in a unit or floor.” The statement went on to say that “TPH does not track data for asymptomatic cases who are tested positive because cases are categorized as laboratory-confirmed or probable but not as symptomatic and asymptomatic.”

TPH still affirms that its “outbreak data for all shelters and respite sites includes all confirmed positive symptomatic and asymptomatic cases.” However, as TPH is currently only testing and tracking data in those shelters where cases have already occurred, rather than expanding testing protocols to the shelter system as a whole, it is virtually impossible to know the full extent of the outbreak.

Public health experts estimate that for every reported case, ten go unreported. So although only 213 cases have to date been reported, the actual number is likely higher by a factor of ten.

TPH says that, so far, no COVID-19-related deaths have been reported among clients of the shelter system. But as infection numbers rise, so does the probability of deaths. Given delays in moving homeless residents to hotel rooms, where they can self isolate, as well as the lack of testing, tracking and social distancing, there can be no doubt that infection rates in the shelter system will continue to increase.

John Clapp reports on affordable housing and homelessness for Spacing.ca and Toronto Storeys and is a contributor to House Divided (Coach House Books, 2019). He wrote about being homeless in this city in July for Toronto Life. Follow him on Twitter at @JohnCla14975279.