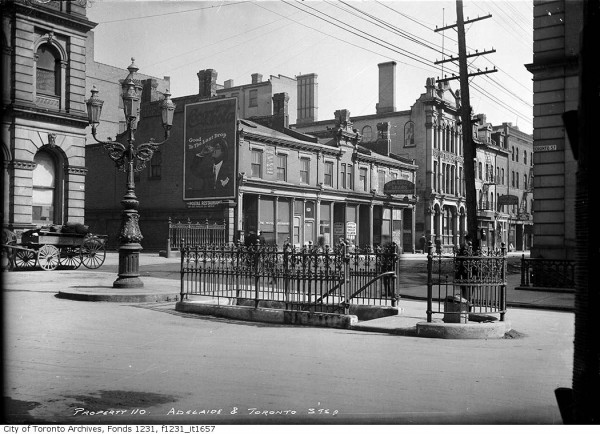 The weather is warming. The sun is shining. COVID-19 cases are on the downturn. And stores and cafes are blinking back to life after the Ford government announced that Ontario retail outlets with street entrances can open for delivery and curb-side pickup.

Sure, there’s a tentativeness to all this. Government officials are looking at every flex of COVID-19, making sure these first stabs at re-opening the economy don’t erase the public health achievements of our recent social sacrifice.

For my money? It’s bound to be an abject disaster.

Not because people don’t know how to stay two metres apart from one another, but because municipal governments are about to feel the acute impact of not having enough on-street public toilets to keep cities flowing.

The economy needs to get moving. And for that to happen, people have to move, too. In the earliest iteration of easing self-isolation, that will mean opening stores — curb-side flower sales; curb-side sneaker pickups; curb-side socks and greeting cards and magazines; pet supply stores selling curb-side dog poop bags.

But note the specific kind of retail establishment to which the Ford government has given the almost-all-clear: those with street entrances. That means mostly small shops. That means definitely street-facing. And that means swarms more people milling around on city sidewalks.

Many of us have been holed up for two months. We need to put on our shorts, order a take-out ice cream cone, and sidle up to a shoe store for new flip-flops.

The good? In these much-needed excursions, people will boost their mental health as well as their local economies.

The bad? They will also find that the bathrooms they’ve relied on are not there for them — libraries, coffee shops, and department stores.

The ugly? Governments are entirely unlikely to see this coming and, so, immune to preventing the looming shit-show.

Here’s why: publicly accessible provision is our bathroom bread and butter in Canada. We are not a country with a culture of public bathrooms — stand-alone on-street toilets open to all. It’s just not who we are. We have always been a culture that relies on commercial toilets open to customers. You know: Starbucks, McDonalds, etc. Successive municipal governments in many cities have, as a matter of policy, passed the infrastructure buck to private businesses. So Canadian urbanites have come to expect bathrooms geared toward helping spenders spend, rather than bathrooms designed to help city users use cities.

Public health and government officials can, and presumably should, mandate continued social distancing, even as they entreat us to launch off the sofa and get take-home tacos for dinner this Friday. But they can’t ask us to leave our bladders at home.

It’s always been the case that citizens’ and tourists’ ability to spend money in downtown cores has been hampered by the ‘bladder’s leash.’

Each of us can only travel so far, spend so much time — and dish out so much cash in the process — without access to a public bathroom. As a society, we’ve learned to make do: buying muffins we don’t want in order to use customer-only cafe bathrooms; knowing about toilets tucked into neighbourhood recreation centres; and slipping in to fancy department stores or posh downtown hotel to use the loos.

This make-do modus operandi is so engrained in our psyche that we don’t even think about it. To wit: for years, I have automatically had a just-in-case pee when I’m about to go on a long dog walk at the park. I don’t think about it. I don’t lament it. I just know I’m going to have to go, and that the basic infrastructure isn’t going to be there for me. Or, say I’m heading downtown to do some random shopping. I’ll always have a preemptive pee when I see a coffee shop, mid-trip. I may not need to go in that moment. But I know it might be the only chance for a while.

That was then. Right now, the situation is promising to be much, much worse.

As far as I’ve heard, there’s been no mention of dealing with the dearth of public bathroom provision with in-store shopping suspended, and no plan to support the leagues of prowling patrons newly sprung from their homes. People will be out. And they will be caught short. It’s inevitable. We’re entering a new COVID-19 moment, and for this moment, we are completely unprepared.

There is hope. It’s possible government can set aside its usual approach of turning a blind eye to this basic and enduring infrastructural need and recognize the dearth of washrooms as an imminent calamity. After all, Toronto added a slew of specially-sited toilet and hand-washing stations for people experiencing homelessness during COVID-19. The rationale: those sleeping rough have less ability to distance and fewer opportunities for routine hand-hygiene. That provision was put in place relatively quickly. The same can happen for the deluge of shoppers who will increasingly flood commercial streets in the coming weeks.

If local governments respond well, and can nimbly pivot, there’s a chance that cities — and pedestrians — may come out of this pandemic better provided for than we went in.

photo by City of Toronto Archives

Lezlie Lowe is a freelance print and broadcast journalist in Halifax and the author of No Place To Go: How Public Toilets Fail Our Private Needs (Coach House, 2018). You can find her reading the story before tweeting @lezlielowe.