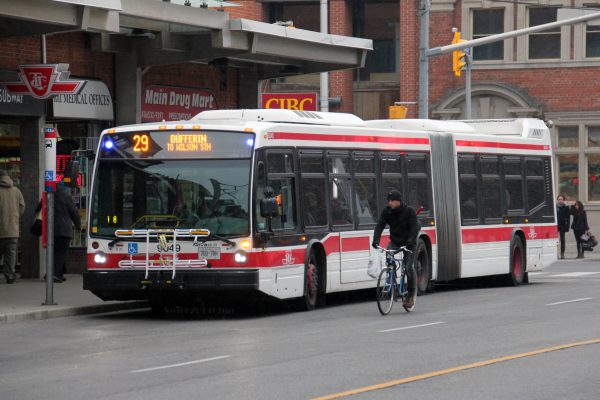 This week, the Executive Committee of Toronto City Council is considering a motion to prioritize public transit on select roadways through the implementation of bus lanes in September. Yes, THIS September.

This is exciting. The TTC and city’s transportation planners have long pushed for such transit prioritization. It took a pandemic to move the item to the top of the agenda for City Hall and to view it with appropriate urgency.

Sadly, the Exec is only considering this one route, and not all five of the routes proposed for bus lanes by the TTC last December. The motion is to create 8.5 kilometers along Eglinton Avenue East, Kingston Road and Morningside Drive, following the route of the longed-for-but-still-just-wishful-thinking Eglinton East light-rail-transit line. A great start, but we should be much bolder.

Toronto is a leader in bus transit, even if we don’t appreciate it, as more transit riders take buses than any other vehicle. 13 of the top 24 bus routes for ridership in North America belong to the TTC. As in many cities, buses do the heavy lifting in the system and dozens of Toronto’s bus routes have been deemed to be over capacity. If the buses ran unencumbered by traffic, they could be like an alternate subway.

I thought the TTC’s ask last December — for bus lanes on Eglinton East, Dufferin, Steeles West, Finch East and Jane — was even a bit reserved. I don’t want to seem ungrateful, but moving forward on just one route now is not enough. Jane is proposed to get its bus lane in the spring, and the others will be addressed…eventually. We need more, sooner.

The implementation of bus lanes on busy corridors like Eglinton is a good service improvement in and of itself. But I also hope that this plan is a signal that the city is starting to properly understand what public transit is and what it does.

When public transit does its job well, there is an economic benefit to the city as a whole. When service improves, economic participation improves: mobility enables people to access employment and the supports they need to accept and keep a job. People in employment generate more wealth for society, have more income themselves, pay more taxes, and draw less on social services and health care. They do better and everyone else does better.

Moving people faster makes them happy, and more reliable service encourages more people to take transit. Multiple case studies have documented this. One found a reduction in travel time of 5-15% resulted in an increase in rush-hour ridership of 2-9%. A recent bus lane pilot in Los Angeles found travel times improved by 30% and ridership increased by 32%. Others have found Bus Rapid Transit systems have increased ridership up to 40%.

Toronto’s transit ridership, while still tops in Canada, has been declining, even before the pandemic. There are many possible factors, including overcrowding, some horrific delays, regular weekend closures, and problems with Presto. What we know from the research is that when you improve service, ridership goes up. Improving bus service is the easiest change for a transit agency to make, and improving travel time with bus lanes is one of the best ways to do it.

During the pandemic, subway ridership dropped much more significantly and is recovering more slowly than bus ridership. Many of those on the buses every day are those with the fewest economic options. Bus lanes are a quick, easy, low-cost way to help them.

If you want to help the people who need it the most, improve public transit.

Most of those on the buses are also women. This matters more than ever, as the pandemic has hit women’s employment harder, and so far most governments’ recovery plans are aimed at industries whose workers are mostly men. If you want to help those affected most by the economic fallout of the pandemic, improve public transit.

Many of us are worried that people are going to avoid public transit and increase their use of cars. If you thought traffic was bad before the pandemic, think of what it will look like if MORE people drive.

More wasted time, more frustration, more injuries and deaths, more pollution. And where will everyone park those extra cars?

There are no outbreak clusters associated with safe transit use anywhere, even when people who were ill were known to have taken transit. I have been looking for transit-related cases since the pandemic began. I have found exactly one, from China in January, before the disease was a crisis and almost no one was wearing a mask.

That’s the only case I’ve found. Out of millions of trips in dozens of cities, over six months. More people got Covid-19 from one Edmonton curling bonspiel (24 of 72 attendees). Think about it: with regular cleaning, mask use, good ventilation and minimal talking, transit is possibly lower risk than your average trip to the supermarket. It is certainly lower risk than a trip to a bar or restaurant.

Buses are the key

If we don’t get people back on transit, our cities’ economies will not recover. Urban economies rely on mobility. People need to get where they need to go. More women, more of those with lower incomes. Especially now.

All signs suggest the Executive Committee is going to support the Eglinton bus lanes proposal and send it to City Council for approval. That would be wonderful, but it’s a baby step. We need to be bolder, and make a much bigger investment in the city’s recovery. Public transit builds a better city. When we give it priority, we all win.