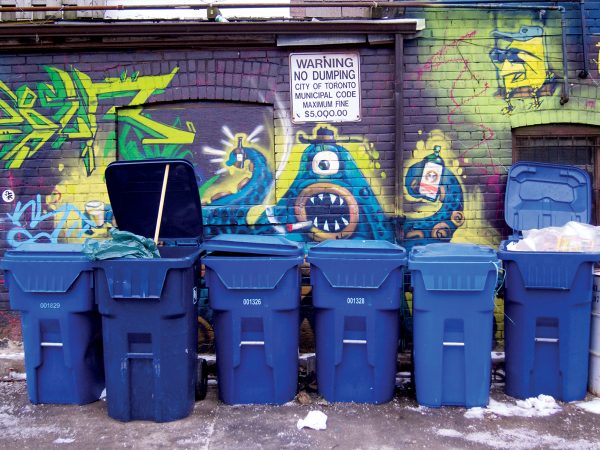 Guarding the bins in the alley

Recycling programs across North America are struggling to cope with rising costs and declining revenues, and Toronto’s program is not immune to the challenges.

“The value of the City’s recyclables has decreased by 30% since January 2018, mainly due to the China restrictions,” says Matt Keliher, who oversees solid waste management at the City of Toronto. The combined financial impact to Toronto from the reduced value of the material and increased contamination was estimated at approximately $9 million in 2018.

China wants to curb the vast quantity of trash mixed in with the recyclables it purchases. As well as banning 24 materials from being imported, the world’s largest end-market for scrap materials also announced a new 0.5% contamination rate standard for materials that it will accept.

In Toronto, the contamination rate has edged consistently upwards, from 22% in 2015 to 30% in 2019. That means approximately a third of what is put in the Blue Bin does not belong there.

The rise in contamination can be traced to changing lifestyle trends, such as the rise in take-out foods and ready-to-eat meals, and the growth in multi-residential buildings, which for a variety of structural and behavioural reasons have a higher contamination rate than single-family homes.

The City contracts with Canada Fibers Ltd. (CFL) to process the contents from all of its residential Blue Bins. Last year was significant because the City surpassed a 27% contamination rate, the point at which CFL charges the City an additional annual processing fee of $3.5 million. CFL charges the City another $500,000 for every additional percentage point beyond 27%. A third-party auditor conducts daily random audits of the material brought to CFL to ascertain the contamination rate.

Contamination is responsible for sending a portion of good recyclable material to landfills, and separating contamination is an imperfect practice that can fail to meet buyers’ higher standards.

Like China, other Asian countries are taking measures to avoid becoming dumping grounds for contaminated and other unrecyclable materials from Western countries.

Many Canadians became aware of these issues when the Philippines rejected Canadian refuse improperly labelled as recyclable plastic, and even threatened war if the containers were not returned. Malaysia recently returned 3,000 tons of non-recyclable plastic to countries including Canada.

The new import restrictions have exposed much of the inefficiency and unsustainability of the for-profit global recycling trade, and may force a reckoning in not only how cities like Toronto recycle but who is responsible for bearing the costs.

Ontario law currently requires that packaging producers bear half the cost of Blue Bin programs. In 2017, the cost of Toronto’s Blue Bin program was $70 million. The City earned $20 million in recyclables sales for a net program cost of $50 million, half of which was paid for by producers. But because the City received almost $9 million less in recycling revenues in 2018, both the City and producers had to bear a higher cost.

“The economics of recycling have changed,” concludes David Lindsay, Ontario’s Special Advisor on Recycling and Plastic Waste, in his final report following six weeks of consultations this past summer. Lindsay observed that the average cost of recycling a ton of Blue Bin materials increased by 50% from 2003 to 2017.

Based on that report, the Ontario government announced in August 2020 that it will adopt a producer-responsibility model like those in British Columbia and Quebec, which will transfer the full costs of Blue Bin programs from municipalities to packaging producers. The idea was considered by previous Ontario governments, but never adopted, in part because municipalities and producers could not agree on thorny issues such as program costs.

Minister of the Environment, Conservation and Parks Jeff Yurek emphasized anticipated savings to taxpayers in the announcement, while industry groups including the Retail Council of Canada, Canadian Beverage Association, and Food & Consumer Products of Canada all signalled their support for the plan, which the government says will be fully implemented by 2025.

In theory, a producer-responsibility model can address many of the growing challenges to the Blue Bin program. To save money, producers will be incentivized to use less packaging and to design packaging that is easier to recycle and uses more recyclable content. A standardized basket of what is recyclable will make it easier for residents across Ontario to identify what belongs in the Blue Bin and should reduce contamination.

But Ontarians should not expect a panacea. In British Columbia, Metro Vancouver’s diversion rate is 63% — ahead of Toronto’s, but still far from the goal of full diversion. Last year, Toronto adopted a new policy for adding materials to its waste-diversion programs that includes extended producer-responsibility principles, but no new materials have been added to the City’s diversion programs since the policy was developed.

Much about the provincial plan remains uncertain. It is unclear which materials will be included in the Province’s basket of recyclables, how much producers will be required to pay, and what diversion rate targets will be set.

The City of Toronto is not waiting for the made-in-Ontario plan to reduce its contamination and increase diversion. While Toronto’s diversion rate has flatlined at around 53% for several years, Keliher says that Toronto is better positioned than many other North American cities to withstand market dynamics.

“The recycling program is still strong in Toronto,” he asserts. “We are fortunate to have access to local markets for a lot of our materials, with over 99% of our plastics sold to reprocessors in Ontario to be made into something new.”

While the City has access to local markets for its plastics, half of the City’s recyclables are fibre commodities, which are marketed across North America and overseas. Since 2017, prices for newspaper and corrugated cardboard have fallen by more than 50%.

The City is striving to capture better information about waste diversion. The flat diversion rate, for instance, is partly misleading because materials are becoming lighter, and the rate is based on a calculation of weight. The City will introduce new performance metrics at the end of the year.

In recent years the City has pursued a host of more assertive recycling strategies, from targeted public education to visual inspections and fines. In multi-residential buildings, the City will reject recycling bins with heavy contamination and charge offending properties for garbage removal.
While producer responsibility is the talk in Ontario, Keliher still emphasizes the importance of individual responsibility. “It is still worth it to recycle, and increasingly important to recycle right.”

This article was originally published in Spacing #52 (fall 2019)