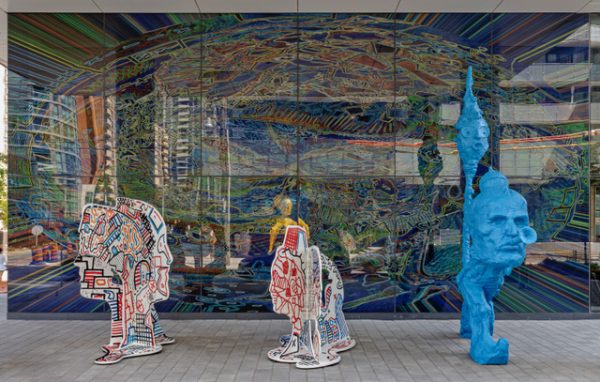 In Toronto, there are a number of public artworks that re-imagine the human subject. I’m thinking, for example, of Hadley+ Maxwell’s Garden of Future Follies, an installation located at Front and Bayview consisting of “collaged fragments” replicated from monuments and statues around Toronto. These bronze copies, combined to create new sculptural figures with multiple heads and a protrusion of bodies, reveal a playfully irreverent disfiguration of famous historical figures.

For another example, take Shary Boyle’s Cracked Wheat, a ceramic sculpture with human legs and a vase body that strikes an eerily animate posture. Or think of Douglas Coupland’s Monument to the War of 1812, a work that renders American and Canadian soldiers as toy figures, transforming the human from subject to object, stripping the individual of agency and self-governance.

The Toronto- and Krakow-based artist group Blue Republic has continued this theme of human reconfiguration with their new installation STARGATE, located on Redpath Avenue near Yonge and Eglinton. Commissioned by Capital Developments and Freed Developments, the installation consists of a colony of alien creatures that populate the entrances to both condos. At 150 Redpath stands a massive yellow figure, equal parts alien and giant spider, looming over passersby. Facing off across the street is the “Blue Trumpeter,” a creature that is both man and machine, animal and alien, sporting what could either be a hoof or shoe on one leg and a mechanism resembling a wheel on the other.

Surrounding the blue and yellow sculptures are smaller space aliens made out of aluminum plate. Formed in the shape of human-animal hybrids, these cut-outs act as vessels for smaller and smaller entities, with every angle of the work revealing different miniaturized critters. Framing all of these disparate beings are massive stained-glass murals that act as portals or cosmic entryways, providing an inter-galactic backdrop to the theatrical display. 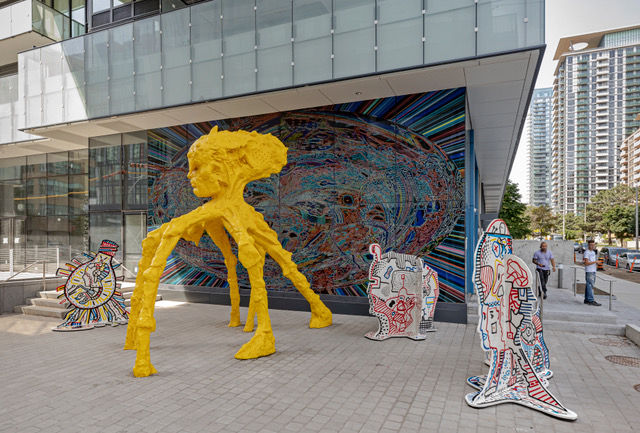 In keeping with Coupland, Boyle and Hadley+Maxwell’s works, these creatures are confluences of different entities, presenting a reconfiguration of the human form. While these beings possess human faces and profiles, there is an unmistakable zoological quality to their depiction.

Amanda Milborne-Ireland, vice-president of sales and marketing for Capital Developments, took me through the process of commissioning STARGATE. “The original commissioning for this work went out in 2015, when the building was still in the planning phase of development”, said Milborne-Ireland. After conversing with the city planning staff, the local councillor, and putting out a public RFP (request for proposal), Blue Republic’s submission was unanimously accepted by the jury overseeing proposals.

When seeking inspiration for the work, Blue Republic artists Anna Passakas and Radoslaw Kudlisnski thought about the people who would be moving into the new condominiums on Redpath Ave. They sought to capture the sensation of “coming home” for the first time, whether that experience was coming to a new home in a familiar city, or landing in a new environment and country. This theme of homecoming is in keeping with conventional condo developer rhetoric, suggesting a possible inflection of condo marketing in the work’s proposed meaning.

“We were trying to think of a universal narrative that would reflect the experiences of all these people,” said Kudlinski. “We started searching in this vast region of mainstream culture, and the obvious choice was science fiction. When I came here 20 years ago as an immigrant, I felt like one of these characters, looking strange, not fitting in, standing out. But these characters will also be embraced.” 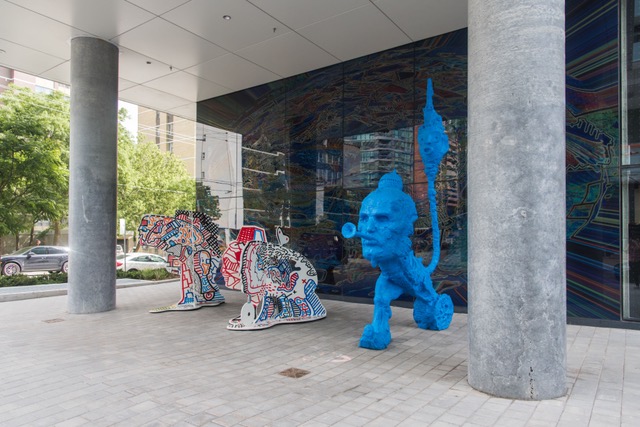 The notion that the foreign or estranged ‘other’ will be embraced with open arms by Torontonians is a somewhat clichéd and decidedly debunked trope, especially in light of the recent rallies aimed against the presence of homeless shelters in the Yonge and Eglinton area. Depicting the condition of newcomers from abroad in terms of actual aliens is also questionable, considering that migrants and refugees are often described as ‘illegal aliens’ for the purposes of dehumanization.

Despite this, Passakas and Kudlinski’s piece is still imbued with a great deal of care, ingenuity and vibrant creativity. The use of space and the interactions among the works allows for a stimulating and beautifully confounding experience. Since STARGATE is an installation—a collection of different multimedia works—it is able to create a novel environment and foster a distinct sense of place. STARGATE feels more like a discontinuous landscape than a single work of art.

This alternative use of space was important for Blue Republic. “In a city like Toronto, we are constantly surrounded with straight lines,” said Passakas. “In some other cities, you almost never see that, but here everything is so straight, all the buildings and streets are just horizontal and vertical lines. That’s why we chose to do a work that was kind of anthropomorphic but also like characters or creatures. We did this to break down the presence of straight lines that are so prevalent.”

In his book Opening Gambits, University of Toronto philosopher Mark Kingwell reflects on Blue Republic’s artwork Measuring the Meter, prompting him to argue that the grid structure of modern cities “cuts the natural site into hard right angles and regular rectangular lots.” This carving up of space turns the map into “the ultimate form of panopticon technology, making everyone and everything localizable and subject to spatial determination.”

With Kingwell’s characterization in mind, we can view the zoological element of STARGATE, and Blue Republic’s reconfiguration of space, as interconnected activities. Considering that public artworks of this kind are usually limited to the entryways of condominiums, Blue Republic’s expansive installation performatively rejects the restrictions of modern urban planning as dictated by the city grid. (Performatively, because such rejections are limited. By virtue of its being commissioned by condo developments, STARGATE is necessarily participating in the rationale of the grid structure of modern cities, regardless of the extent to which it formally problematizes such logic.)

In a vein similar to the ostensible restructuring of the Toronto grid, STARGATE’s fusion of animal and human, alien and familiar, allows for a more fluid (less demarcated) understanding of the connections and distinctions between ourselves and others. If the urban grid dictates the subject, then loosening this grid may allow for a new kind of human, a different kind of city-dweller. The lines of categorization and demarcation become both literally and figuratively blurred. In an area like Yonge and Eglinton, this is probably a much-needed intervention.