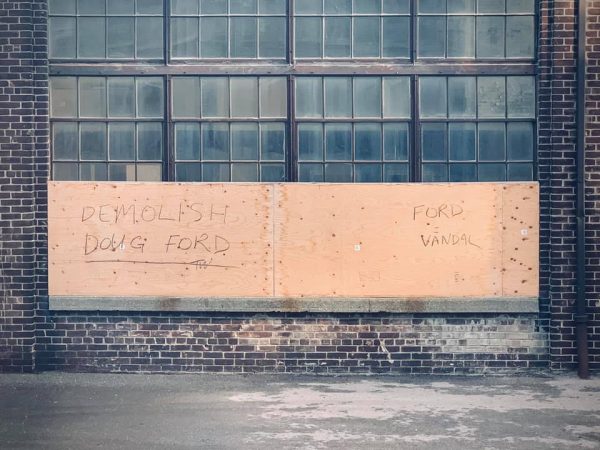 There could have scarcely been a more succinct visual metaphor for the chronically dysfunctional relationship between City Hall and Queen’s Park than the sight, this week, of that big yellow backhoe munching on the side of the soon-to-be-former West Donlands foundries on Eastern Avenue.

A few days ago, the vast majority of Torontonians who don’t live in or near Corktown probably had no clue about the existence of this historic industrial complex, much less its suddenly incendiary role in intergovernmental relations hereabouts. Today, those foundries are a flashpoint, their mindless destruction offering up more evidence of one government running roughshod over another.

Many ironies are baked into this tale, but the most glaring one, to my eye, is the fact that this area has become a viable and attractive location for developers partly because of the continued existence of another set of heritage industrial buildings that everyone’s heard of: the Distillery District.

I used the word ‘partly’ because there are an abundance of nuances. The West Donlands is also a destination for development because of provincial investments in remediation that extend from Bob Rae’s days as premier to the PanAm games in 2015. Also, this area deserves to be intensified because it will eventually be served by a nearby GO stop and an Ontario Line station, not to mention two existing streetcar routes, etc.

Should the province, which has owned the foundries for decades, have attached facadism-type heritage riders to the site that would produce the kind of building that has risen about the old Loblaw’s warehouse at Lakeshore and Bathurst? Probably.

This is a trickier question to answer. I wasn’t upset in the least when the province used MZOs to fast-track a pair of emergency modular supportive housing projects last year to quell the mewling of Chicken Little ratepayer groups. But in the case of the West Donlands, are MZOs the right tool from a planning perspective, or simply more evidence of cronyism and a maximalist mindset at the cabinet table?

The answer will depend on your political perspective, but I think it’s difficult to dispute the more general point, which is that the confrontation reveals just what a crummy relationship the city and the province have these days, notwithstanding the mayor’s kowtowing rhetoric. The friction list is long: pandemic response, size of council, conservation policy, heritage policy, carbon policy, transit investment, etc.

But it’s also fair to say that since amalgamation in 1998, this intergovernmental relationship has been mainly poor, interrupted by a fleeting periods of détente or like-mindedness. Falls Road in Belfast before the Easter Accord. An old married couple too dug in to divorce. The Hatfields and the McCoys. Pick your meme.

At times, the province is lording it over the City. In other moments – the early days of Rob Ford’s mayoralty come to mind – the City is in the, um, driver’s seat.

Nor is it entirely accurate to characterize the relationship as victimizer-victim, even though one of the enduring myths of Toronto politics is that Queen’s Park is always sticking it to local residents one way or the other.

Sometimes, the City can give as good as it gets. When Doug Ford’s preening, pre-pandemic government decided to throw a legislative spammer into the 2018 municipal election, I doubt his lawyers expected to be prepping for a hearing date at the Supreme Court of Canada, asked to account for whether the Tories’ high-handed move to slash council mid-campaign amounted to an infringement of the Charter’s freedom of expression guarantees. To date, six judges – one lower court, five higher court – have weighed in on this matter. Three said no, three – including two of the most highly regarded jurists in Canada – said yes.

There was, it should be said, a brief period when both parties sought to formalize and normalize the relationship – between 2006 and 2009, when then mayor David Miller and then premier Dalton McGuinty negotiated the City of Toronto Act, which is, effectively, a charter. The political allegiances frayed when McGuinty’s Liberals reneged on transit promises, but the law remains on the books.

I re-read COTA after the Tories slashed council. What was clear is that in some important ways, the document is a political truce dressed up as a law, and therefore just as susceptible to regime change as anything else banged out between these two bickering institutions. In any event, the province can always amend a provincial law, which speaks to the paradox that confronts all dreams of municipal autonomy (including the recurring fantasy of constitutional amendments).

The other significant problem with COTA is that it’s not a living political document; it is simply a static set of rules. By contrast, the Queen’s Park-City Hall relationship is surely one of the most dynamic anywhere in Canada. The political participants change constantly, the issues can evolve very rapidly or not at all. Views about city-building generally, and the role of Toronto in particular, fluctuate wildly. Voters make ambiguous choices. Markets change. Disasters happen.

While alignment is unattainable for all the obvious reasons, I’d say it should be possible for the two sides to develop and regularly update a framework — e.g., a memo of understanding — for interaction, as well as lists itemizing points of consensus, areas of policy disagreement and some mechanism for resolving disputes. The occasion to renew or renegotiate such a framework could be after elections, for instance, as the City of Toronto and provincial elections coincide.

I realize, of course, that such an approach requires two willing counterparties, and at least some commitment to negotiating in good faith. What’s more, we all have to acknowledge that it’s impossible to anticipate or resolve all sources of friction, and also that political power will be exercised.

Naïve? Perhaps. But if there’s one conclusion that almost everyone would agree on, it is that the endless intramural fighting is ridiculous, expensive, and unproductive. Our society is filled with examples of how rival entities devise approaches that encourage negotiation and address points of disagreement.

Surely the public institutions hunkered down in their respective redoubts at either end of University Avenue can figure out how to do the same.

photo courtesy of Friends of the Foundry (cc)