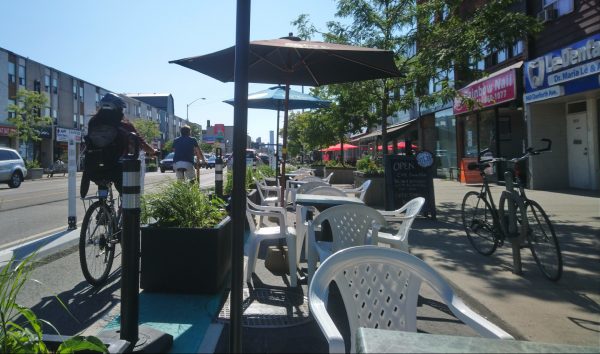 Toronto City Council approved a ten year bike plan in June 2016, which called for 335 kilometres of on-street cycling infrastructure. To track the progress (or lack thereof), Albert Koehl – founder of Bells on Bloor – and I started publishing our findings of infrastructure built each year (see a spreadsheet of the tally). In July 2019, City Council laid out its plans for 2019 to 2021 with the Three-Year Implementation Plan, which replaced the Ten Year Plan and outlined priorities for implementation on a rolling basis.

Unfortunately, the past four years saw less than 30 kilometres of bike lanes built, including only three kilometres last year. Was 2020 going to become another year of disappointing progress?

As it turned out, 2020 was historic for Toronto’s cycling community because cycling infrastructure was not only installed in greater numbers, but also in a greater range across the city (see a Google map of installations by year).

Back in mid-March, the novel coronavirus (COVID-19) developed into a pandemic and the world went into various forms of lockdown to control the virus. With many people working from home, traffic volumes and public transit usage dropped while bike sales boomed. Various cities around the world started to partially (or fully) close streets to cars to help provide space for people who walk and bike to practice physical distancing.

In May, Mayor John Tory announced ActiveTO, Toronto’s program to provide space for people to get outside to commute and exercise using active transportation. ActiveTO consisted of over 60 kilometres of quiet streets, weekend road closures to cars, and the acceleration of the bike plan.

The weekend opening of roads to cyclists and pedestrians along the eastbound lanes of Lake Shore Boulevard West and Bayview Avenue started during the Victoria Day long weekend and were an instant hit with Torontonians. A third opening for the eastbound lanes of Lake Shore Boulevard East was added the following weekend. The first counts conducted on Saturday, May 23 found over 30,000 people rode bicycles and 10,000 walked on all three corridors; while subsequent counts remained similarly high throughout the summer. These road openings – originally scheduled to end in September – were extended into October due to popular demand. Parts of Yonge Street were closed to cars for two Sunday mornings in September as part of Open Streets TO.

On May 28, 2020, Toronto City Council approved accelerating the Cycling Network Plan and included 25 kilometres of temporary bike lanes in addition to the 15 kilometres previously approved. By the end of 2020, a net total of 31 kilometres of bike lanes were installed – more than in any other year in Toronto’s history. The temporary projects will be reviewed in Fall 2021 to determine whether they will become permanent. Separations on several existing protected bike lanes such as Woodbine and Richmond-Adelaide were also upgraded from flexi-posts to more durable concrete curbs (with flexi-posts) or jersey barriers. In other places, physical separation was added to previously unprotected bike lanes such as along stretches of Harbord, Runnymede, and Lansdowne.

The most significant achievement of 2020 was the establishment of a fifteen-kilometre continuous cycling corridor along Bloor-Danforth from Runnymede to Dawes, though one small section under the West Toronto Railpath remains unfinished pending hydro work. The Bloor extension from Shaw to Runnymede is permanent, while filling in the Bloor East gap (Avenue to Sherbourne) and Destination Danforth (Broadview to Dawes) are temporary. Destination Danforth was well executed, with some parking spaces converted to patio seating during the summer under the CaféTO program, along with street art and curb extensions. In comparison, the Bloor East gap struggled to display the same level of structural soundness: wave barriers were easily demolished and curbside loading zones placed the bike lane in the door zone. Upgrades and revisions to the Bloor East bike lanes are planned for early 2021.

The bike plan acceleration included protected bike lanes along University Avenue, Bayview Avenue, and Dundas Street East to fill key gaps in the downtown network. The suburbs benefitted with bike lanes on Wilmington Avenue in North York and Huntingwood Drive in Scarborough. A second ActiveTO route in Scarborough was installed on Brimley Road, but was removed only four months after installation over driver complaints of increased travel times (which worked out to one minute eighteen seconds). While Etobicoke did not get any new bike lanes through ActiveTO, new cycle tracks were constructed as part of the Six Points road redesign along Bloor Street, Dundas Street West, and Kipling Avenue. Another two kilometres proposed for Overlea Boulevard remain “under consideration” at the time of writing.

2020 unfortunately saw fifteen cycling deaths within the Greater Toronto Area, including four in the City of Toronto. These four deaths happened at a highway interchange (Finch and Highway 400), along streetcar tracks (Dundas and Denison), at the hands of a cement truck driver (Royal York and Judson), and on a high-speed arterial (Dufferin and Sylvan) – all of which are reminders that more needs to be done to keep people who bike safe.

A 2020 cycling recap would not be complete without recognizing the Toronto Bike Brigade. Lawyer Dave Shellnut started the initiative early in the pandemic to have people who bike deliver food and other supplies to people in need. They also helped marshal various social actions, including those from the Black Lives Matter movement, Indigenous groups, climate activists, and the memorial ride in December for the fifteen cycling deaths in the Toronto area.

The public health crisis created unique challenges, resulting in huge improvements in Toronto’s cycling conditions being achieved throughout 2020. Toronto has also made progress along Yonge Street by approving a study of bike lanes from Bloor Street to Lawrence Avenue for possible installation in 2021, as well as giving the go ahead for Transform Yonge in North York Centre. The yongeTOmorrow study from College to Queen Streets will go to City Council on February 2, along with a report on ActiveTO. Will the well-received weekend road closures continue next spring and become permanent post-pandemic? Will we be able to build on the progress of 2020’s installations? Let’s keep these questions in mind as we ring in 2021; and if you support the progress that was made in 2020, consider signing the petition to support ActiveTO at cycleto.ca/KeepActiveTO.

Robert Zaichkowski is an accountant, board member with Cycle Toronto, and writes the Two Wheeled Politics bike blog.