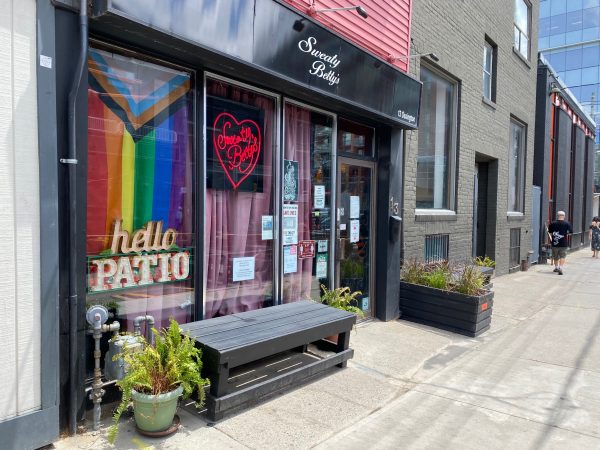 LGBTQ+ spaces in urban areas have been establishing themselves for decades, growing larger and larger as each generation brings its voice and creativity. Many of these spaces are composed (at least originally) of marginalized queer people in search of support, freedom, and self-expression. Most of all, these spaces provide the feeling of a home.

May Brand, the current owner of Sweaty Betty’s, says of this kind of business that it’s “not just a queer space, it’s a safe space” — which makes the loss of queer spaces concerning. In particular, because there are so few queer women/inclusive spaces, it becomes a big deal when they are lost.

Over the last few years, members of the queer community have noticed the decline of available queer social spaces, in particular spaces for women, trans, and non-binary identifying people. There is an abundance of gay men’s nightclubs in the village of Church and Wellesley, but many have questioned where the spaces are for women and for those experiencing intersections of race, class, and gender, even beyond just the queer community, who have a need for safe gathering places.

“As a business, it’s important to let your community know what you stand for and that means queer rights, trans rights, Black Lives Matters, indigenous rights, and you have to make that that known and express that,” Brand says. “I think it’s a simple thing.”

Plenty of bars and social scenes have been in place at one point in time or another — places where women and other queer people who did not identify as gay men were able to be themselves and let loose. These were places inclusive to all and catered to the wide intersectionality of queer life: spaces like the late Hen House, The Steady, Less Bar, or the beloved Beaver on Queen Street West, which has been the most recent to close its doors.

Sweaty Betty’s has been around for two decades, Brand says, and it is in part due to the “no bullshit” attitude expected of the patrons. “If you’re homophobic or transphobic or racist or sexist, don’t come in here,” she says. This attitude comes from the many years of homophobic and transphobic rhetoric she heard in the bar’s Ossington area as it developed, she says.

Gentrification of neighbourhoods in metropolitan areas around the world has caused a problem for all small businesses. The driving up of rents makes keeping places afloat difficult and some business owners wary of opening.

But it can be done. Vivian Lynch has been transforming her popular bar Yard Sale in Leslieville into Lavender Menace, aptly named after the lesbian feminist group in the 70s. The thought came pretty easily when she realized most of her patrons were queer and already felt safe in the environment.

“We had a lot of people coming in, especially young women who were queer in some way and they were all just really happy to have a space that felt safer,” she says. “We also know a lot of gay men here. Leslieville has a very diverse demographic.”

The opening comes with its own issues of social media controversy. A now-deleted tweet, posted on May 7 by Lavender Menace, questioned the constitutionality of pandemic restrictions at the same time as it announced an opening date, creating an online backlash from some members of the community. One twitter user, @The_Terroirist, says their reaction was of disappointment and how the comment was so unnecessary when “they had a community that were excited about them opening, and cheering for them.”

Despite the setback, Lynch hopes to inspire the opening of bars in neighbourhoods not known for being queer.

The pandemic created many problems for the queer community. But it has opened the door to using more inclusive and accessible online parties to create virtual space.

DJ Cozmic Cat, co-founder of Cherry Bomb, the longest-running queer party for women, says she was very apprehensive about moving online. “I had a lot of resistance to the whole online thing,” she says. “I never started DJing to have an online radio show, it was always about connecting community and people with pulses and sweaty people in a room.”

But while Cherry Bomb is currently on hold due to both the pandemic and the closing of their usual venue The Round (another recent loss of a queer-owned space), Cozmic Cat realized the worth of online parties.

“Live streaming isn’t going to go away. And I think it’s going to benefit. I’m excited to see the way that live streaming is going to contribute to the creative community where I’m already thinking every show I do in the future I might just set up a laptop and webcam as a bonus to people like my friends in the States or people in Europe,” Cozmic Cat says.

While not so tech-savvy herself, Brand appreciates the mark virtual spaces have made on the queer community. She says people who suffer from anxiety or mental health issues, among other things, will benefit from the continued online use.

“For a lot of young queer people it’s a way to connect, really,” she says. “They need that now more than ever.”

The push to keep these safe queer spaces open reflects a need in the community and is very much wanted. Brand says this was apparent when donations to the Sweaty Betty’s GoFundMe page helped keep the bar alive during the lockdown.

“That right there shows you the difference in the community, how much people care and how important it is to preserve what we have,” she says. “We’re all kind of coming together and saving each other and it’s a beautiful thing.”

Beyond community initiatives, support from politicians and political advocates will help. Kristyn Wong-Tam, councillor for Ward 13, Toronto Centre, is already lending a hand.

A specific motion was passed to support live performance venues, including drag bars. She says this was needed as drag often takes place in informal spaces rather than bars. “They’re in gay clubs or perhaps sometimes in bookstores like Glad Day, or it could be in sort of random pop-up spaces, and they could be in other types of venues,” Wong-Tam says.

While creating programs to give live performances financial support, she designed a way to support artists and performers directly. “It’s not just the venue operators that need support, it’s the artists that need support,” she says. “I want them to think about creating grant programs that will specifically support drag artists.”

Queer business owners have hopes of preserving safe spaces for the future. One includes integration with predominantly heterosexual spaces, especially outside the downtown core.

This strategy enables the ability to extend further away from ‘The Village’ and reach more queer people. Brand thinks it is the only way to allow for more acceptance of LGBTQ+ life. “I think would be really cool is if spaces and bar establishments had queer nights. That would show that you have an interest in catering to the community in that way,” she says.

Brand is proud of the safe space Sweaty Betty’s can provide. “I really just want people to know that they can always come to the bar,” she says. “We’re there to help, kind of like your therapist.”