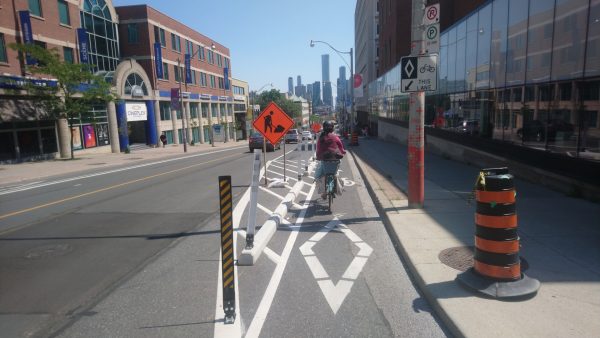 The City of Toronto is currently working on the 2021 – 2023 Cycling Implementation Plan, which will come to the Infrastructure and Environment Committee (IEC) and City Council this fall. Will this plan resemble the snail’s pace from the 2016 Cycling Network Plan – seven kilometres built annually from 2016 to 2019 – or build on last year’s pandemic success with a historic 31 kilometres built?

When the ten year Cycling Network Plan was approved in 2016, the annual cycling budget was doubled to $16 million and called for 335 kilometres of on-street bike lanes. That bike plan was replaced in 2019 with a rolling three-year implementation plan that ends this year. The 2021 – 2023 plan proposes a further budget increase to $20 million, with annual increases going forward. Even with this increase, the City has had prior difficulties fully spending their budget, as well as monies provided under the federal Public Transit Infrastructure Fund and Ontario’s Municipal Commuter Cycling program.

To address the problem of not spending the allocated budget, the City needs to ensure their Pedestrian and Cycling Programs unit is sufficiently staffed and resourced, as well as release an annual “bike account.” This bike account should show how much of the budget was spent, how many kilometres of bike lanes were installed, city staffing levels, and safety metrics such as people killed or seriously injured while biking.

The 2021 – 2023 plan calls for 25 kilometres of bike lanes this year – 5.75 kilometres of new infrastructure have been built so far per the bike lane tracker – and another 70 kilometres for 2022 – 2023. Fortunately, the City has reverted to using centre-line kilometres instead of lane kilometres to make it easier to understand and compare with other jurisdictions. The two most significant routes are tied to the Eglinton Crosstown (about 20 kilometres) and Finch West (about 11 kilometres) LRT projects, expected to be completed in 2022 and 2023 respectively. While the surface portion of Eglinton from Brentcliffe to Kennedy could be completed later this year, delays with transit projects such as this are likely. 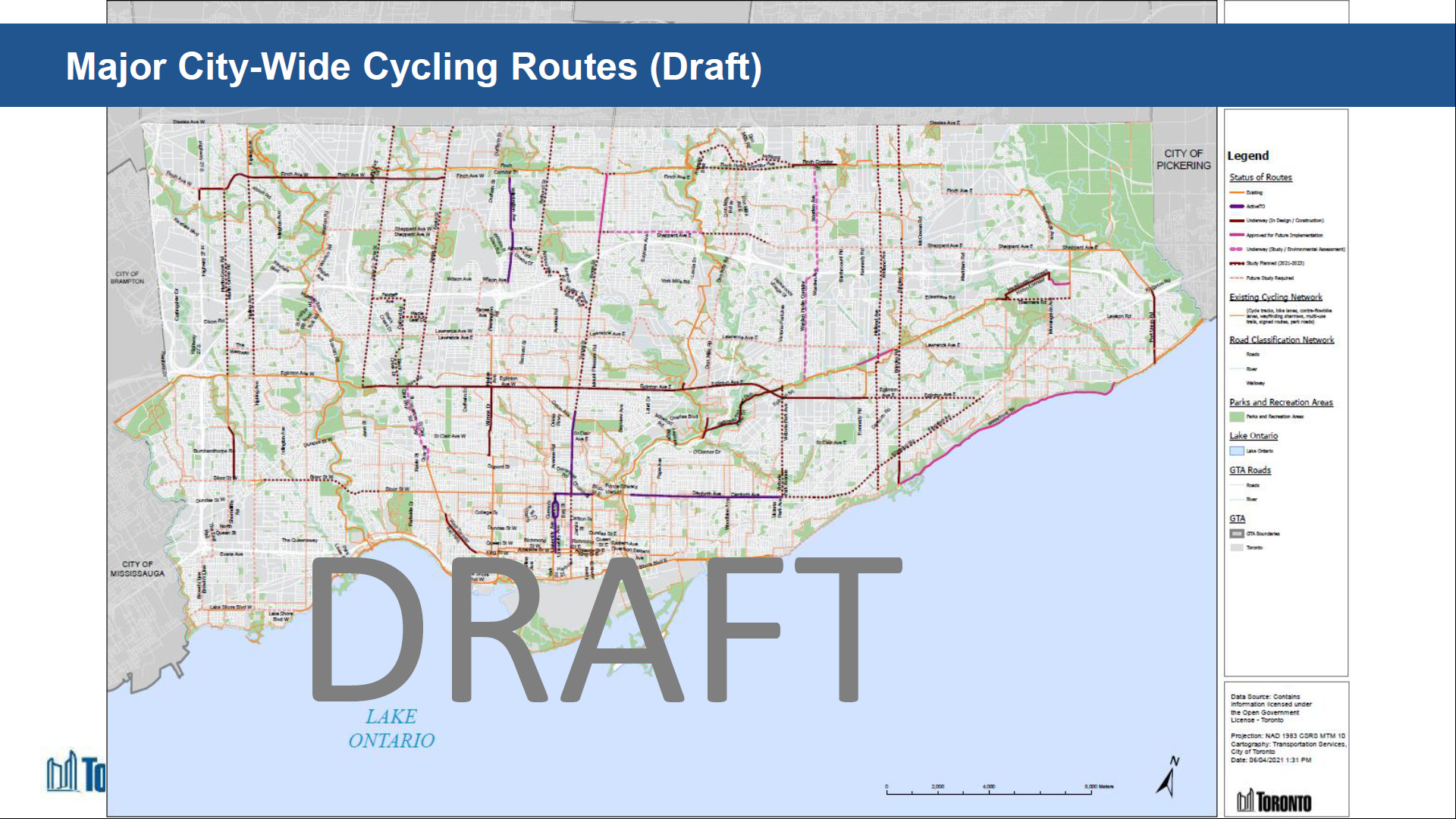 The only other major arterials expected to get bike lanes in the near term are Sheppard Avenue from Yonge to Leslie (with a study planned for crossing Highway 404) and Bloor Street from Runnymede to Royal York (with another study to complete the gap to Six Points). This update calls for other studies along arterials such as Kipling, Jane, Yonge, Kingston, and Midland; all of these were previously identified as major corridor studies under the 2016 plan but were put on hold at the time.

Toronto’s cycling community has been frustrated with the so-called need for studies, with certain routes such as Bloor-Danforth having been subject to them for at least 30 years with minimal action before the pandemic. Given the success the Bloor-Danforth bikeway from Runnymede to Dawes – as well as the urgency of problems such as climate change – the City of Toronto should re-evaluate the need for these studies and provide clarification on timelines for the above mentioned projects. Clarification is also needed on how the City uses criteria such as equity, safety, connectivity, and potential demand to prioritize these projects.

This bike plan update is missing several routes which ought to be deemed as priorities such as the following:

The Weston and Don Mills-Overlea-Broadview routes would help serve neighbourhood improvement areas such as Weston, Mount Dennis, Thorncliffe Park, and Flemingdon Park, which have long lacked safe active transportation infrastructure. While Bloor is identified as an east-west priority, a bikeway along Dundas west of Six Points would align with Metrolinx’s Dundas BRT and connect with the large number of residential towers there. Finally, including the last part of Yonge from the Finch Hydro Corridor to Steeles would eventually complete a continuous north-south cycling corridor from Steeles to the waterfront, as well as help relieve the future Yonge subway extension.

Advocates wishing to learn more are encouraged to read the draft plan on the City’s website (PDF). Staff have been directed by Council to return later this year with a report on all ActiveTO cycling projects per Becky Katz (Manager of Cycling and Pedestrian Projects), but it’s premature to confirm how any reporting will be structured for Council consideration at this point.

This plan should serve as a litmus test on how serious Toronto is in building back better, including having 75% of trips under five kilometres done by walking or cycling, reducing greenhouse gas emissions, achieving Vision Zero, and completing the major city-wide cycling network.