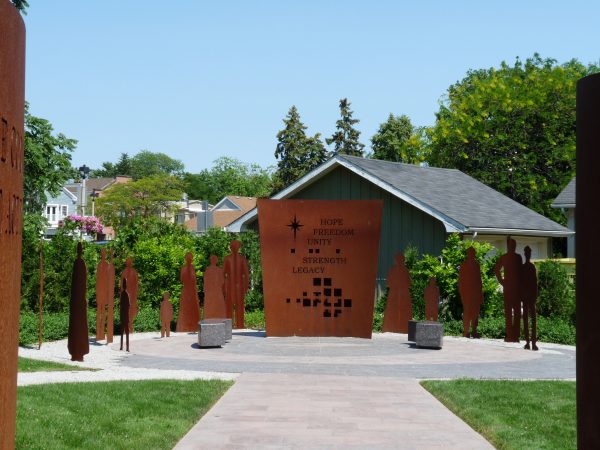 We did the Black thing as we passed each other on the trail — nods of mutual recognition, a celebration that we are still here.

I had cycled from Niagara Falls GO train station to Niagara-on-the-Lake on a daytrip to find the Black history along the Niagara Recreational Trail. It runs along a headland, parallel to the Niagara River, overlooking a steep gorge and, of course, the wondrous falls.

The first stop was at the bottom of the hill from the GO train station, to read the historic plaque to Harriet Tubman. In the 1850s, she crossed the old suspension bridge, fleeing slavery on one side and finding freedom on the far side. However, Tubman found that being free and alone in Canada, in December, was no fun. So she made return trips to the United States, each time guiding more fugitives to our ‘Great White North.’

At Queenston Heights I nodded to the Black men in the Coloured Corp. They did not return my nod as they were, well, dead. A blue and gold Ontario Heritage Trust plaque tells the story of how these men fought for Canada when U.S. troops invaded during the War of 1812. The Black community’s biggest fear was that an American victory would mean a return to living under the whip. The Coloured Corp regiment was segregated. Yes, that was part of life in Canada, too.

Hopping back on my bicycle, I followed the trail through a park, and followed a long curving incline with lots of blind corners. I cruised down the hill — luckily it had plenty of bumpers (sleeping policemen?) — to slow down cyclists daydreaming of flying on a bicycle.

There are many parks on the Niagara Recreational Trail. They were packed with families having picnics and barbecues. The families were multicultural — Filipino, white, Muslim, Chinese and South Asian. I nodded to the few Black families enjoying a day out in nature. Unfortunately, no one invited me to gatecrash their picnics!

After my own lunch, it was back on the bicycle. The sweat dripping down my face and soaking my back was inconvenient. But I was on a mission and nothing was going to stop me, except for the little kids wobbling and swerving across the trail. Hit the brakes, ring the bell again, and then very slowly pass them. I smiled as I did so: they are kids having fun outdoors.

The trail has many historic plaques, which reveal the area’s public history. They tell the stories of who and what are important to the nation. I am interested in who is present and who is absent from these condensed versions of history. Power and privilege determine who is memorialized and who has been erased.

Many told the stories of the settlers who were the first white people in the area. They started a mill, built a railway or a wharf, served in the war, and so on. Finding the plaques about Black and Indigenous history was like searching for a pine tree in a forest of oaks. My crude estimate is that less than ten per cent of the 200 or so plaques I passed that Sunday focused on Black or Indigenous history.

The next Black history plaque was dedicated to Chloe Cooley’s story. In 1793, she was tied up, thrown in a boat, rowed across the Niagara River, and sold to an American buyer. Her screams and shouts alerted others. Their testimony convinced Lieutenant Governor John Graves Simcoe to propose legislation to limit and phase out slavery in Canada. He could not abolish it immediately as about half of the members of the colonial assembly in Upper Canada owned slaves. Still, it was the first law to limit the sale of enslaved people in the British Empire. The act was the beginning of the end of 200 years of slavery in our land of ‘We the North.’

Finally, I reached Niagara-on-the-Lake — a charming, story-book town brimming with Victorian architecture. Think gingerbread-trimmed homes, elegant verandahs, and thousands of hanging floral baskets. The restaurant patios were so pretty, with their umbrellas and mass of plants and flowers, that they looked like film sets. Multicultural crowds strolled the streets seeking food, ice cream or just soaking up this version of a lovely daytrip. 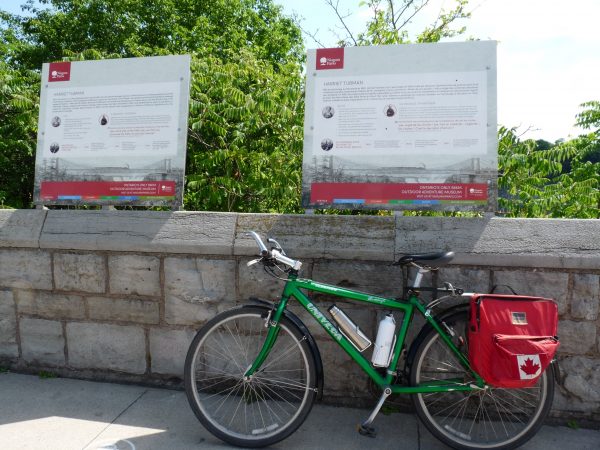 Back to my mission: Niagara-on-the-Lake has an extensive Black history, with plaques, houses, graveyards, and a new park to commemorate that presence. History becomes more meaningful for me when it is place-based. There is a visceral thrill in touching, walking, or, in today’s case, cycling, in the places where Black history occurred.

Reaching the Voices of Freedom Park, the first thing I did was reach up to touch the names. The gesture was instinctive. Chloe Cooley. Solomon Moseby. Black people who made a difference to the history of Canada.

Voices of Freedom Park is a lovely memorial to the Black people who lived in Niagara-on-the-Lake. Some started off enslaved and others were free. By the 1830s, the Black community was established, with people advertising their businesses — for instance, hairdressers, livery stables and mattress makers. Black people owned shops and houses; they won local elections.

I sat on a shady bench in the park to contemplate the centuries of Black history around me. Munching sweet cherries, the juicy nectar seduced my lips. Just then, a horse-drawn tourist carriage passed by, adorned with flowers, and with the driver wearing a top hat. A Black family sat in the carriage. We grinned and waved at each other. We are still here. 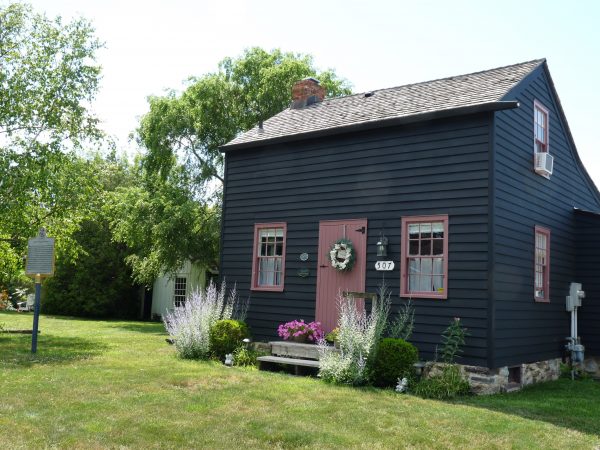 The William and Susannah Steward House

The William and Susannah Steward House was a block away, and so I cycled over there. It’s a modest cottage which was in the then-coloured section of Niagara-on-the-Lake. The cottage is a private home and so I could only gaze at it from the outside. It is gray clapboard, with a pink door and window stills. Pink curtains added to its twee-ness. The house has a plaque from Ontario Heritage Trust.

William Steward was African American. In 1837, he was among the group of Black citizens who petitioned the Canadian government to ensure that Solomon Moseby would remain free. Moseby had been jailed and was about to be extradited back to slavery in U.S. His extradition would open the floodgates for slave-owners and slave-catchers to reclaim their human property, and betray the promise that following the North Star led to the land of freedom. Ice and snow, yes; freedom, no. The Black community organized, protested, and freed Moseby. Black lives mattered, then. Black Lives Matter, now.

Back on my bike, it was time to zip over to the Negro Burial Ground and its historic plaques. The place is a neatly trimmed field of grass covering an old cemetery. The space needs benches, a fence, gazebo, trees and flowers to make it an inviting place to linger.

Mississauga Beach was down road, so I cycled there. The name is derived from an Anishinaabe word meaning those from the great river mouth or river outlet. I soaked my feet in the cool waters to celebrate this daytrip. Three Black women were laughing as they too walked in the water, and we exchanged waves. They were like the Three Graces — classic, beautiful, and inspiring joy in nature. 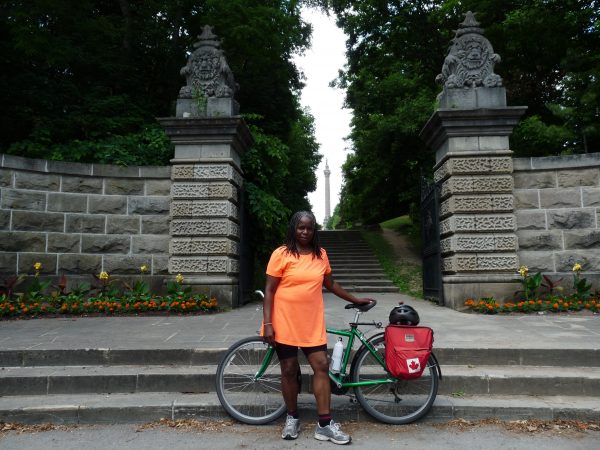 My dillydally by the water was over too soon. It was back on the bike for the return ride to Niagara Falls GO train station. This time, I stopped at Fort George, a National Historic Site, to see the new plaque to the Black Militia Units in Upper Canada, 1812-1850, including the Coloured Corp. The Niagara region has so much Black history, and my daytrip only skimmed the deep roots of the Black presence in the region’s farms, villages, and small towns.

The journey marked a combination of my favourite activities — outdoor recreation, Black history, and the search for a Black sense of place in the land of ‘We the North.’

Jacqueline L. Scott is a PhD candidate at the University of Toronto. Her research is on the crossroads of race, outdoor recreation, and the broader environmentalism. Follow her on twitter at @BlackOutdoors1.