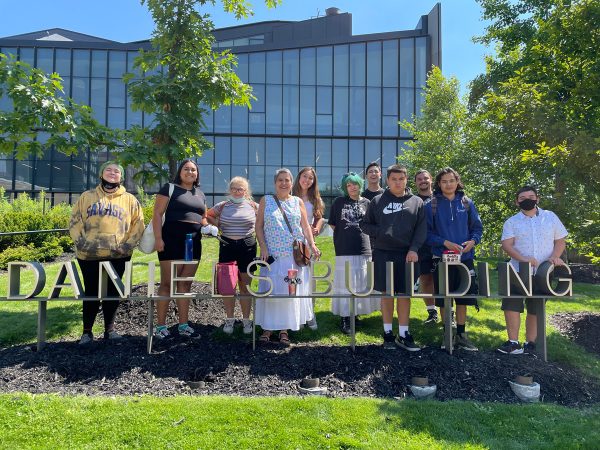 It’s impossible to teach someone how to build a deer-skin drum over Zoom. “Just feel the string,” says Oshkabewis (Anishnaabemowin: helper), Healer and Elder James Carpenter (Grey Cloud) as he passes around a drum with a newly attached sinew dangling from the back, “you can feel how taught it needs to be.” This summer, as pandemic restrictions were lifted, a group of Indigenous youth joined Carpenter at Artscape Gibraltar Point on the Toronto Islands for cultural teachings.

The program I have been invited to join, Nikibii Dawadinna Giigwag (Anishnaabemowin: flooded valley healing) is a unique pathway to postsecondary education at the University of Toronto’s John H. Daniels Faculty of Architecture, Landscape and Design, that weaves together Elder-led cultural teachings with landscape architecture and environmental conservation field work. The youth are employed for seven weeks over the summer by the Daniels Faculty to work on landscape architecture and planting design projects with partners like the Toronto and Region Conservation Authority (TRCA) and Evergreen Brickworks. They are trained and mentored by landscape architects, ecologists, Elders and Knowledge Keepers. 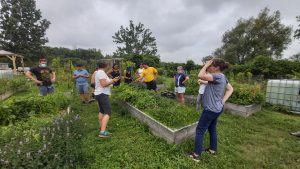 “The teachings, culture, and landscape architecture, they really interweave them together,” says Dan, one of the program hires, when I ask him what makes the program unique. “With this program you can be in a position of power and still be a land protector,” he says. “I think of all our relations… instead of just us, the two-legged, I’d think of how what I’m building benefits everything around the community,” he says about how his perspective on landscape architecture has shifted, “it really makes you think about the land on a whole new level.”

Cultural teachings throughout the summer program are often provided by one of the programs founders, Whabagoon, Ojibwe Elder, Keeper of Sacred Pipes, who sits with the Loon Clan. “It’s about the spiritual connection to the land,” she says when I ask her how an Indigenous perspective might inform new approaches to landscape architecture. “You have to have the patience and love. It’s an ongoing relationship that you have to build with the land.”

Making their own drums, for example, is a way for students to connect with the land. “That beat is mother Earth’s heartbeat,” she says, beating out a simple rhythm on her drum, “it’s our heartbeat.” The drums encourages us to think of the natural rhythms of the landscape and how players are connected to the Earth. “I’m hoping that these drums will be the start of their path or be a helper along their path,” she says. 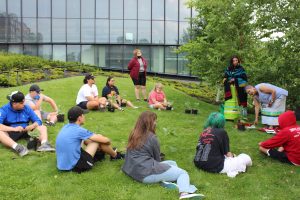 This kind of shift in thinking is exactly what Terence Radford, a mentor in the program and one of only two Indigenous landscape architects in the country, hopes to see. “It dramatically changes the program if we include Indigenous perspectives,” he says, about existing design curricula at Canadian Universities.

Programs like Nikibii Dawadinna Giigwag ask us to reconsider the relationship between people and land at a fundamental level. “The world is in a lot of pain right now,” chimes in Stefan Herda, a Master of Landscape Architecture student at Daniels who acts as a mentor to the youth. “We need to start looking at more traditional ecological knowledge as a guiding principle on how we approach and tackle climate change and other issues,” he says.

This shift in perspective is being noticed in the field. Previous alumni from the program have been hired as design interns by architecture firms such as Brook McIlroy Indigenous Design Studio because of their training in integrating cultural values and practices with design. I talked to Sonia, now 18, who was first hired at Nikibii Dawadinna Giigwag when she was 15. As one of the only Indigenous kids growing up in a small town North of Toronto, Sonia says that she grew up disconnected from her culture. “I would never have known any of this stuff,” she says, “being so connected to Indigenous culture and having teachings from an Elder.”

Two years ago, Sonia had a hand in designing a discovery garden with mentors at the TRCA in a park just steps from her house in her hometown. The youth researched what kinds of plants would be ecologically appropriate and allow for people to reconnect with Indigenous botanical teachings. “We had the four directional stones in the garden and we had medicinal plants to turn it into a healing garden,” says Sonia. Now she can bring friends and family to the garden to show them what she has been working on. Her experiences inspired her to enroll in Indigenous Environmental Studies at Trent University next year. Her work in the program “led me to this path,” she says, “there’s so many things you get opened up to. It totally changes you.” 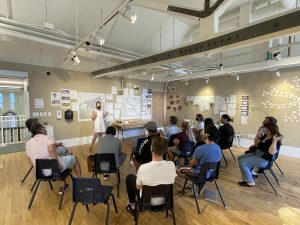 Kate, another three-year veteran, tells me that the Nikibii Dawadinna Giigwag network “feels like family.” “I feel really connected to everyone,” she says, explaining how her confidence has inspired her to enroll at St. Lawrence College next year for Fitness and Health. Her friend Emma will be starting at Queens to study Psychology. I ask Emma to describe her favourite moment from the past three years and what follows is a long pause. “It’s not just one thing you can pick,” she finally says, “there’s just so many things that leave a mark on what we do and who we are as a person.”

Although the programming includes guest visits from academic researchers, design professionals and Indigenous Elders, the structure is specifically designed to be non-hierarchical. Liat Margolis, the Nikibii Dawadinna Giigwag Program Lead and Director of the Master of Landscape Architecture Program at Daniels, describes a growing circle of artists, architects, healers, Elders, Knowledge Keepers, language speakers, gardeners, chefs, biologists, urban foresters, and environmental conservationists who together create an informal network of learning and support for the youth. “It’s a community that’s forming,” she says. “People that meet begin to form their own circles, their own initiatives,” she says, “the Nikibii Dawadinna Giigwag program has so many indirect positive impacts that go beyond its original intention.”

Whabagoon describes a similar, non-hierarchical educational model. “Learning, for me, is not a hierarchy, it’s a path,” she says, “We’re all on the same path but we’re at different places. My job as an Elder is to look at each student to see where they are and what they need.”

Margolis is also looking for ways to decolonize the landscape architecture curriculum at Daniels and bring these teaching practices to the school. She tells me about a teaching from an Elder last year that prompted her to reconsider how Daniels could teach plant knowledge and plant partnerships. Together with the youth in the program, “we started to think about botanical drawings in a different way, which then feeds into the graduate program I teach,” she says.

The youth will lead

Now that Nikibii Dawadinna Giigwag is in its fourth year, it is considering how to create an opportunity for youth to return as mentors and guest speakers for future cohorts. “These are the future instructors of the program right here!” says Herda as he sees me interviewing Kate and Emma. Later on, Herda explains his enthusiasm: “this is the way knowledge passes on from one generation to the next.” Margolis is also eager to embrace the possibilities of a strong alumni network. “First we started with an intergenerational model,” says Margolis, “and now we’re moving to intragenerational teachings.” Both Elder Whabagoon and Oshkabewis Carpenter speak of the drums we are making as “grandmother” or “grandfather” — ancestral connections that reach back generations.

Looking back on the success of this summer’s program, Elder Whabagoon sounds hopeful. “The youth will be the ones that lead us to where we need to go,” she says. Through their positions with the University and their work with partner organizations and mentors, the youth have learned that their presence and voices are valued and they develop the confidence to pursue their ideas. “This program makes you think you can do it,” confirms Dan, “they put a lot of belief in you. It’s how you see yourself grow too… that’s when the belief starts to kicks in, the idea that ‘I can actually do this.’”