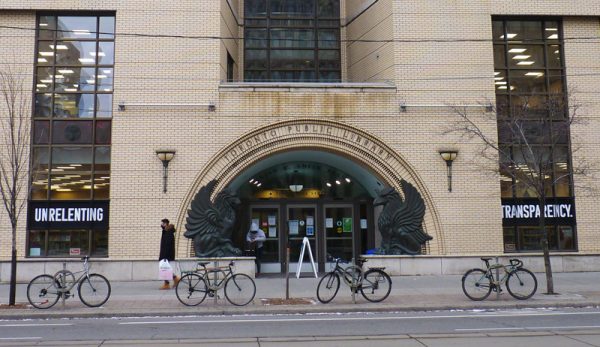 Walks around the city have been made more interactive in the last few months thanks to StrollTO, a program implemented by the ShowLoveTO initiative. StrollTO encourages city dwellers to spend more time outside and to familiarize themselves with their local urban space. Alongside self-guided itineraries for walks in 140 Toronto neighborhoods, the program includes the Poems for your Path project, which can be found across all twenty-five wards.

Poems for Your Path’s text-based visual art displays are collaborations with local artists, providing uplifting messages of resilience in community spaces. Spacing spoke with Hiba Abdallah, whose contributions to the initiative can be seen at the Montgomery Inn and multiple Toronto Public Library branches, including Lillian H. Smith, Gerrard/Ashdale, Mount Pleasant, and the Beaches. Collectively, her installations are titled Declarations for a Different Future, Part 2. (This interview has been edited for length and clarity).

Spacing: What’s the importance of public art in an urban space like Toronto, especially in the time of a global pandemic? What impact does it have on placemaking and social dynamics?

Abdallah: Even outside of the pandemic, public art is such a huge asset to any community if done well; I think that there’s a lot of power that can come from making art and creating work in public space. It steps outside of the gallery museum space into a way more public realm, where you can have input and reactions from a wider community. I think in a lot of instances it can actually influence or shape a specific neighborhood or community – again, if it’s done well.

Spacing: How did you get involved with Poems for Your Path?

Abdallah: I’ve had a long relationship with the City of Toronto, specifically the folks working on Poems for Your Path.  I did a piece for Nuit Blanche Scarborough back in 2018, which is where I met some of the folks who work on the public art team at the city of Toronto, and we’ve kind of kept in touch since then. They approached me during the first year of COVID and said, “Hey, what’s a way that we can engage different neighborhoods in Toronto and encourage people, now that things are a little bit safer, to take more walks outside?” It would encourage the mental health aspect of what’s been happening during COVID and have people re-enter their neighborhoods and engage with them in a playful, fun way.

Spacing: What was your process like in creating Declarations for a Different Future, Part 2? How did the locations where your artwork is displayed factor into the project’s design?

Abdallah: Declarations for a Different Future, part one, was commissioned for a magazine, so definitely a very different space, but they started out as notes-to-self that I was creating for myself as reminders to think about civic and community engagement in my own practice, and to continue to help myself see the benefit in it. It’s not easy work to do, and sometimes it can be a bit pessimistic or cynical, so they became those reminders to myself that I put out, that the community could also reflect on.

And so, in this second iteration I was really thinking about that word “community,” and what it means. In the beginning of the pandemic, it was thrown around a lot in different contexts, like the idea of connectivity, how we keep in touch, and how emotional connections can continue on in a different way, especially in a time of great fear and uncertainty. So I centred the second part on that word to see what types of things I would tell my neighbours, or people that I am close with and care about at this juncture in time. I visited each site that the city had proposed, the majority of them being library spaces. I really took into account the scale that they were giving me as parameters and then that, of course, influenced the type of text, but the sentiments across all of them are the same. In terms of design, they are very specific to the place, but the theme of community connectivity and resilience is found throughout.

Spacing: What would you like Torontonians who see your artwork to take away from it?

Abdallah: I don’t necessarily always think about what I want someone to take away from something, but I work in text often, and I think that oftentimes as we walk through cities we’re used to seeing billboards and advertisements – things that want you to do something. Usually that ends in some type of commercial exchange and so, for me, it’s always interesting to create texts in public that are actually not asking you to do anything except reflect on your own personal agency in the place that you live.  Maybe it makes you a little bit kinder, maybe it makes you think about your neighbors a little bit more, maybe it makes you call your mom, or maybe it makes you just continue on in your day. That’s totally fine as well, but I see text as a really great gateway into communicating with a larger public in a way that’s a little more direct than other forms of art.

Spacing: What other public artwork projects in Toronto or the GTA would you like to highlight for our readers?

Abdallah: There are so many different types of public art and, honestly, the ones that I’ve experienced that I really appreciate have never been permanent. Of course there are public artworks that I’ve seen in cities like across North America or overseas that are very impressive in terms of scale, or in terms of material and the feat of constructing it. But when it comes to something that really resonates with me and stays with me, it’s always been the artworks that are up for a short period of time and then disappear. So, to me, programs like StrollTO or festivals that make these types of work possible in public are a really interesting idea to explore, in the sense of “Why can’t these works be more permanent?”

Recently, I saw the Bentway had done a series where they were projecting onto a building near the waterfront. There was a piece by Erika DeFreitas that was really lovely and also one by Alvin Luong. Those two just come top of mind, but you can imagine strolling down there, walking your dog or whatever else at night, and coming across this massive projection installation of video works by Toronto-based artists. It would be pretty great if that could be made more of a permanent thing.

Spacing: Finally, is there anything we didn’t touch on that you’d like to leave off with?

Abdallah: I’m very much interested in what can happen when artists and urban planners and architects and city planners and policymakers are at the same table, and talking about how to make a certain neighborhood safer or how to help community members feel like they have agency over the place that they live in. All of these types of questions lie in the intersection of urban planning, urban design, visual arts, and policymaking. Each of us play a part in building that structure and it’s very interesting to see a slight shift happening at the city level for allowing these types of relationships to finally kind of happen.

I don’t know the extent to which they’re actually genuine in their intentions of putting community first. When we look at a city like Toronto and see the incredibly fast-paced incline of buildings that are going up, real estate that’s unaffordable, and unhoused people, that discrepancy is so enormous and the city’s intervention on it is frankly unacceptable. I’m really interested in the potential of mediating that through something like art as a starting point, and seeing people in other lines of work and other experts in different fields as collaborators and potential partners, to really think through how we can solve some of these issues that we’re seeing in Toronto, as opposed to siloing ourselves.

I would be very interested in working with someone in urban planning, for instance, or architecture or at the City, to see what the problems are and learn about them, and then use creative ways to come up with some solutions. That would be something that I would I see as really great public art: for artists to have a place at the table and really think through some of these problems. I know that the City of Toronto has just introduced a new residency program where an artist will be able to work within one of the city sectors, which is really interesting, and I’ll be very curious to see how that unfolds over the next year.