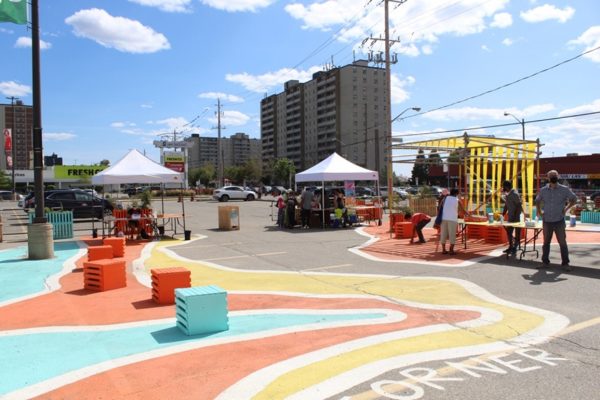 Corner Commons was a collaborative effort by the Jane-Finch Centre and Perkins&Will to enhance a historic gathering spot in the Jane and Finch neighbourhood.

This project was designed and built by the Jane/Finch Centre (JFC), with the help of international design firm Perkins&Will and local volunteers. It was also a partnership with the Jane Finch Mall, which provided the free lease agreement and maintenance support throughout the summer.

This past summer, the Jane and Finch neighbourhood got a glimpse of what a community-driven public space could look and feel like. It was a striking example of how underused spaces can act as resilient hubs for all.

The pandemic has reminded us that public spaces are valuable first responders for communities. Corner Commons transformed a small corner of the Jane-Finch Mall into a vibrant pop-up public space that hosted a range of programming, including grassroots community events, educational workshops, vaccine clinics, artist residencies, local vendors, and live music. But more than that, it was also a 24/7 corner for informal community use – a place to rest until your bus arrives, meet up with a friend, take a phone call, eat lunch, or just tie your shoe.

For years before its conception, local residents, community organizations, and other neighbourhood stakeholders and supporters have used the parking lot. And while it’s been used by many, it lacked the resources to properly activate the space. This was the impetus for Corner Commons – through conversations with community members, we realized there was a real opportunity to improve this space and create the temporary infrastructure that added to the vibrant character of the neighbourhood. With this same collective, we formed our working group, developing the initial concepts and programming ideas that formed the basis of Corner Commons.

From the beginning, we knew this had to be a community-led process. From the summer of 2019, the Jane-Finch Centre embarked on a journey to meaningfully work with the community to create a welcoming and enjoyable public space. The urgency to create a dedicated space for community programming was critical amidst rapid change in the area.

We hosted information tables at the mall, held visual surveys on our website, and hosted a weeklong pop-up event onsite to test preliminary designs and programs. We also engaged students from the University of Toronto and OCAD University to rework the initial design and create a refined site plan with prototype furniture. 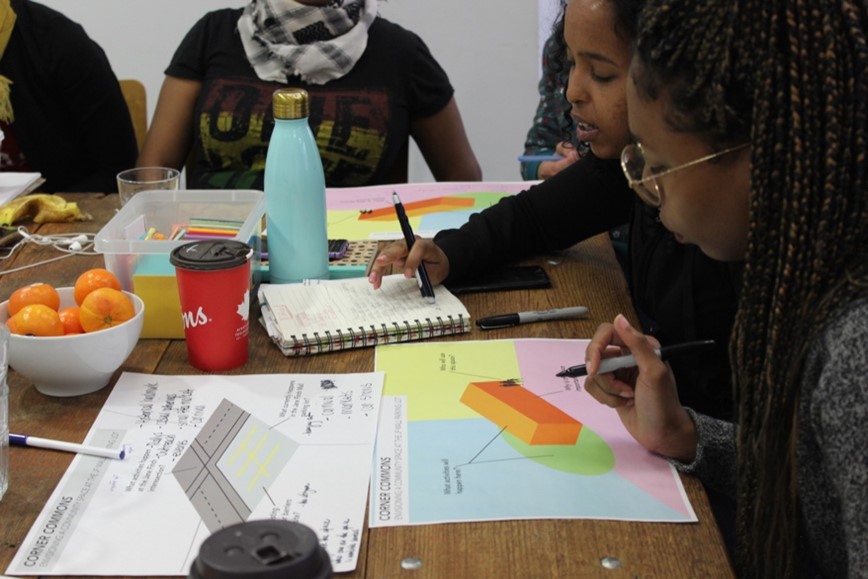 Corner Commons was a collaborative effort by the Jane-Finch Centre and Perkins&Will to enhance a historic gathering spot in the Jane and Finch neighbourhood.

With approximately 10,000 square feet of asphalt in an inner-suburban part of the city, we were working with a complex blank canvas. How would this public space compete with car traffic, three major bus routes, and the emerging construction of the Finch LRT? How would it be visible for the family at the apartment balcony across the street or the person hauling their groceries from FreshCo at the mall? How would it serve as a place to rest but also a place to play?

Ultimately, how would we leave room for “magic” – to welcome members of the community to take ownership, create their own sense of place, and allow Corner Commons to evolve naturally into a cornerstone for the neighbourhood?

From all these community engagements emerged a unified vision for Corner Commons: to create a space that would enable community members to meet, rest, and spend time outdoors. More importantly, this effort would provide a much-needed central space for local grassroots groups and organizations to safely connect residents to information, services, and supports and engage the broader community on important local issues and initiatives.

The power of design to bring a vision to life

As a team, Perkins&Will and the Jane-Finch Centre created a simple kit of parts based on the community’s vision. The key was ensuring the space was flexible enough for the community to use but provided enough structure to support any community programming, from meditation workshops to street events. And as this entire process – from engagement to construction – happened over the pandemic, we shifted the design many times to ensure that, on top of creating a welcoming and enjoyable public place, it was also a safe space that abided by public health guidelines. 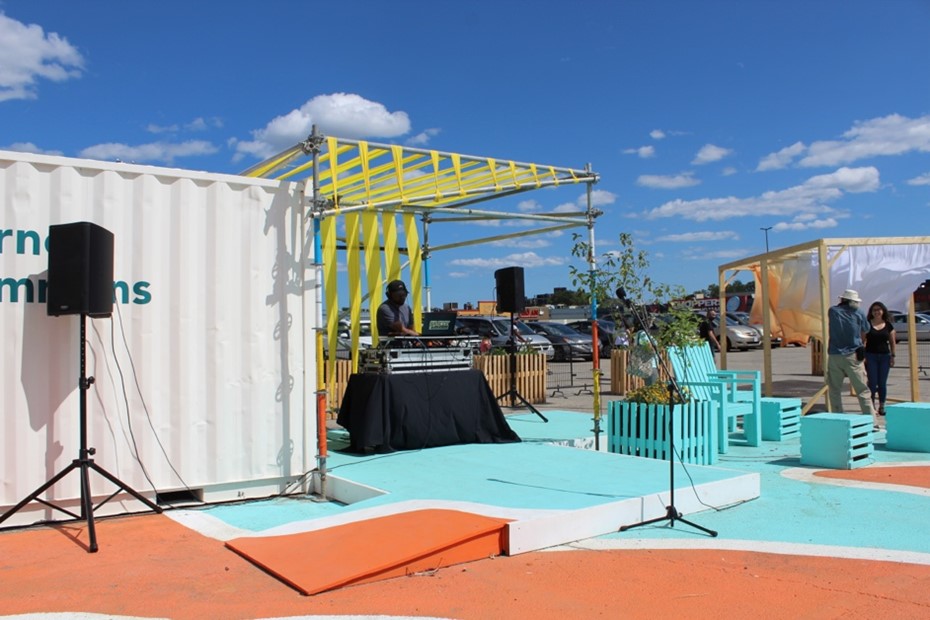 A modular stage was used to host live music and other performances. (Image courtesy of David Megia Monico)

The heart of Corner Commons was the stage – a centralized platform for all activities. The stage was entirely modular and could be reconfigured to suit any type of event, whether it was a musical performance, an informal lounge, or a play area. It became the core for any and all activities to happen.

In addition, working with an open parking lot posed many microclimate obstacles. From hot sunny days to sporadic summer storms and huge wind gusts – Corner Commons had to prepare for a range of weather events. The community raised these environmental challenges and drove the idea for spaces that were covered, yet light and permeable. As such, our solution used scaffolding to create weather-proof structures adorned with yellow fabric strips that injected vibrancy into the space. More than ensuring relief from the weather, the bright yellow colours created a visual lightness and airiness to the parking lot. 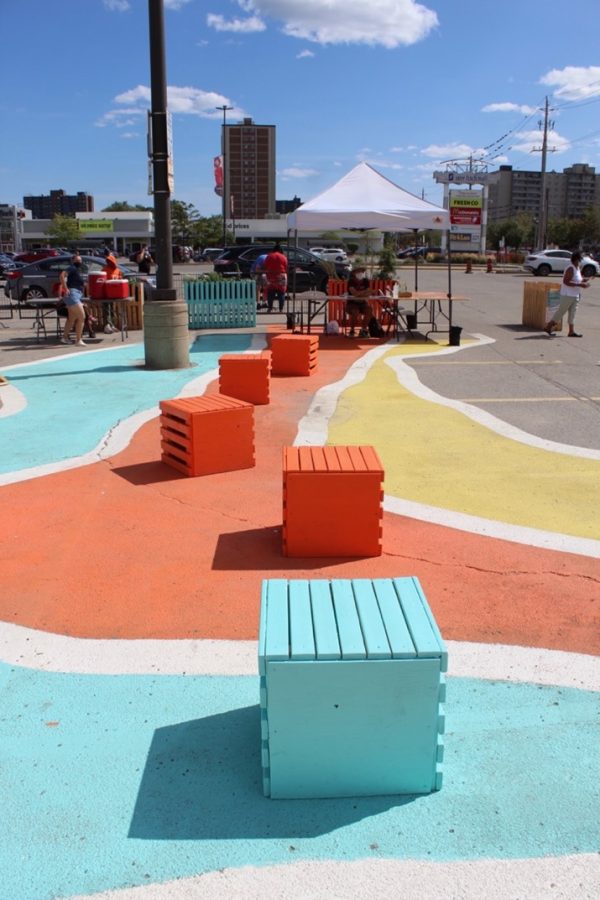 Modular seating was added throughout the space, spaced six feet apart to maintain physical distancing. Throughout the lot, we added plants and greenery – which community members had shared was very important in creating a public space that was warm, inviting, and relaxing. Over 400 native plants lived at Corner Commons in order to bring more life into the parking lot. Planters lined the peripheries of the site, with larger planters with cedar trees and dogwood placed beside seating zones.

All these elements were grounded by a palette of bright and inspiring shades of blues, oranges and yellows that transformed the grey parking lot. The palette, developed alongside the community, created a striking element that was visible from all angles, especially from the apartments across the street. The design was rooted in the local context by adopting the contour lines of the Black Creek – the beloved neighbouring park network. Inspired by the park’s dynamic topography, the painting created dedicated zones and encouraged social distancing. 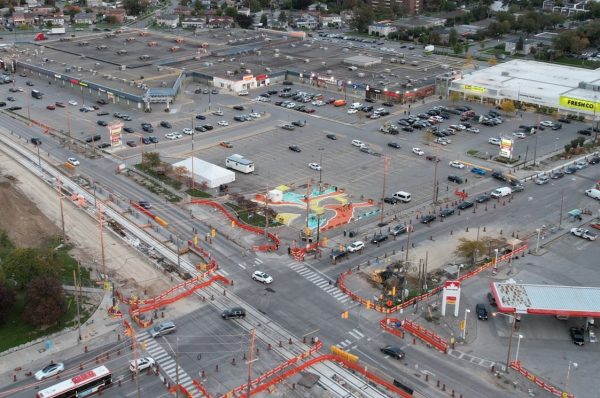 An eye-catching social hub in the community, the parking lot mural was designed to pay homage to the topography and contour lines of the Black Creek. (Image courtesy of Jane/Finch Centre)

An example of connection and community for all of Toronto

Community members took part in all aspects of Corner Commons, including the design, construction, and animation of the space through the summer. Residents took ownership over Corner Commons, demonstrating pride in the furniture that they built and the memories made onsite. Although it was intended to be a temporary public space, the scale of the installation brought a sense of permanence.

Over the summer, the space was used for a range for programming, including two artist residencies, pop-up vaccine clinics, and a small business market and artist showcase that highlighted local, women-owned businesses and artists with the grassroots organization Flaunt It Movement. Beyond formal programming and community events, the space was open for anyone to use from July to the end of September.

Toronto has an abundance of underutilized spaces. There are countless sites that can incubate similar resilient hubs: overlooked parking lots, highway underpasses, bus stops, or curbside spaces. Corner Commons started as an idea, then became an opportunity thanks to willing community members. The project became the success it was through its collaborative nature and the diversity of opinions and perspectives that were shared.