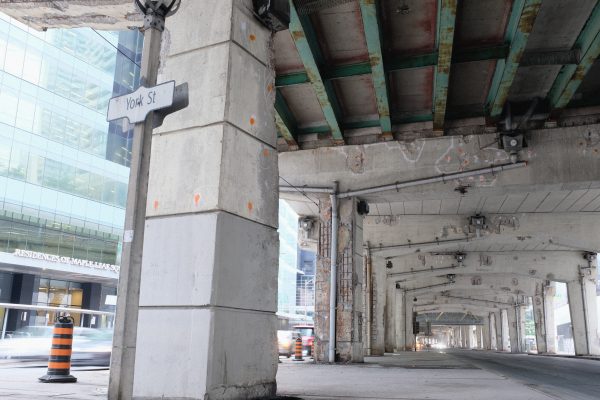 Two major intersections on Lake Shore Boulevard under the Gardiner Expressway will be looking quite different very soon, as the Bentway’s Waterfront ReConnect design competition has recently announced its winning entries. 5468796 Architecture Inc., a practice from Winnipeg, will be taking over the York Street and Lake Shore intersection with a project titled Boom Town, in partnership with Office In Search Of. Meanwhile, Calgary-based O2 Planning & Design Inc. will collaborate with Mulvey & Banani Lighting and ENTUITIVE to transform the Simcoe Street intersection with a design called Pixel Story.

In August 2021, the Bentway Conservancy, a charity whose work focuses on a site underneath the Gardiner Expressway, put out a call across Canada for design proposals to rework two major intersections that serve as key points of access to the Waterfront. Six finalists were chosen, with three proposals for each intersection, and in January these teams had the opportunity to share their proposals with the public online. Viewers could then respond to an open survey with feedback on the designs, which was then taken into account by a jury of designers, planners, architects, and leaders in relevant institutions who selected the final winners.

“What was particularly exciting was the degree of collaboration that we found on the teams,” says Ilana Altman, the Co-Executive Director of the Bentway and a jury panel member for the Simcoe Street intersection. “There were a lot of artists, working with designers and engineers and lighting consultants. The ways in which people have come together around this project is incredibly exciting.” Important directives for design teams included making sure their proposals focused on the experience of pedestrians and cyclists and helped them navigate an area that was built for cars, as well as bridging the division that the Gardiner Expressway creates between the city and Lake Ontario. Other considerations were how the designs engaged with the history of the space, how the public could interact with and respond to the installations, and the environmental impact of the projects. 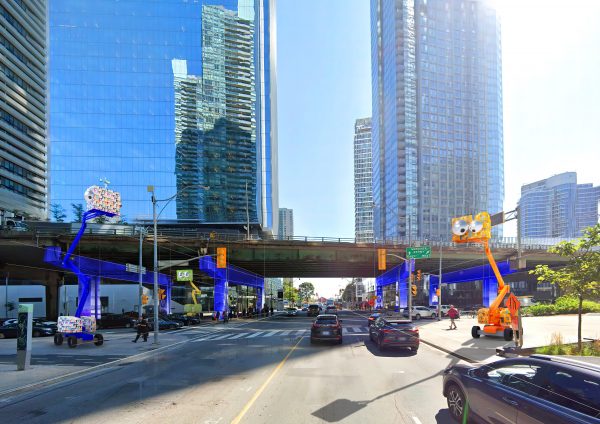 Boom Town, the successful proposal for York Street, seeks to redefine the boom lifts that are constantly found beneath the Gardiner for construction and maintenance purposes by turning three of them into the Bent Buddies. Named Trekker, Tinker, and Trouper, the Buddies are brightly decorated characters intended to liven up the intersection and attract visitors. The proposal envisions these boom lift personalities being decked out for different seasons and holidays, making them cheerful landmarks that appeal to visitors, especially children and tourists. The boom lifts will remain operational while acting as the Buddies, meaning that they can be used for their everyday functions when necessary, and can be displayed in a variety of poses.

To complement the trio of Bent Buddies, Boom Town also includes a second component that paints four of the Gardiner’s support columns and overhead bents blue, with extra vinyl detailing on the columns that will reflect sunlight and cars’ headlights. This treatment on the columns particularly addresses the challenge of the poor lighting at the York Street intersection, and is intended to help make the space livelier for visitors, especially at night. 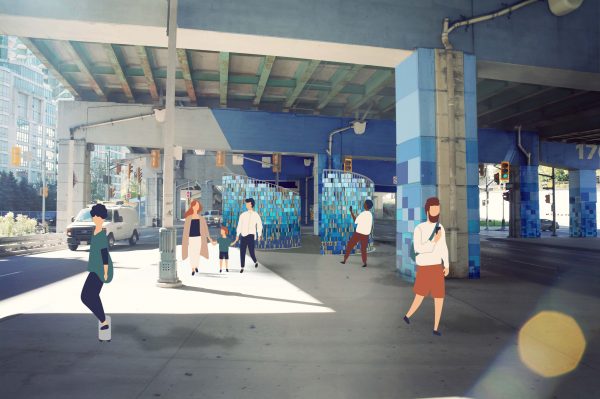 Painting the columns and bents blue also happens to be an important aspect of Pixel Story, which will be found at the Simcoe Street intersection. A blue gradient meant to resemble varying depths of water will appear across four of the bents, visible to both drivers and pedestrians from a distance and acting as a navigational aid. Detailed pixels on the highway support columns will be viewable by pedestrians who approach, and as the project’s title suggests, the pixels will communicate story prompts that encourage people to create stories of their own as they walk past or wait for a crossing. Pixel Story’s proposal also includes a pre-installation teaser period to help collect ideas for the prompts.

The pixel theme will be further incorporated in the Pixel Wall, which are curved panel installations that will appear at four different spots around the intersection and its medians. The panels can be rearranged into different curve patterns or can create an enclosed space, and will be made up of aluminum rods with pixels mounted on them. Unlike the static pixels on the columns, these ones will rotate freely, allowing for the pixel pattern on the panels to constantly evolve as people interact with them.

This successful pair of projects will be installed later this year and will be present until activity from the Gardiner Expressway Strategic Rehabilitation Plan begins in the area, which is planned for 2025. While Boom Town and Pixel Story are only temporary, the Bentway Conservancy hopes that they can provide longer-term lessons and experiences that will inform how the space under the Gardiner is developed. “We felt that there was a really important opportunity prior to the deck rehab work, where we could actually test ideas for a two-and-a-half-year to three-year period and get the public to interact directly with these prototypes,” says Altman. “The intention is to learn from them and apply the learnings to the recommendations for the Gardiner once the deck rehab work is complete.”