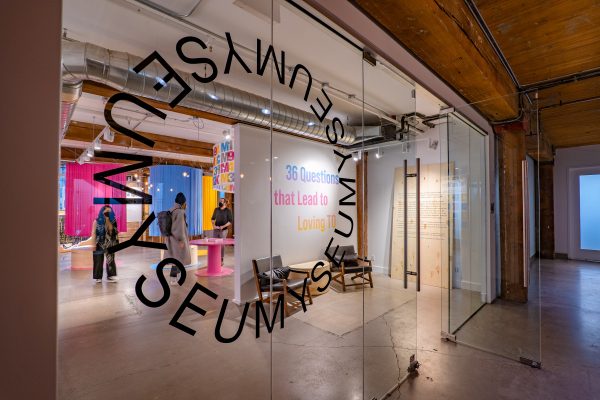 What do you love most about Toronto? Which places in the city would you like to share? A new exhibit in downtown Toronto, 36 Questions that Lead to Loving TO, invites you to give your answers to questions like these and explore what other Torontonians have to say. Designed by Christine Elson of elsonstudio and hosted by Myseum of Toronto, 36 Questions that Lead to Loving TO is the first exhibit to be held in Myseum’s new project space at 401 Richmond Street West. It opens to the public today (March 18th).

Myseum, as Toronto’s city museum, has for several years held events and coordinated programs that invite engagement with Toronto’s history and culture, in various spaces around the city and online. Recent examples include a digital exhibit on the history and legacy of Black railway porters in Canada, and Myseum’s annual Intersections arts and culture festival. “Most major cities have city museums, and some may be more traditional than others, but most of them really look at the complexities of places they live in, and work towards this idea of creating a sense of where people can feel they belong,” says Heidi Reitmaier, Myseum’s executive director. “There are a lot of institutions in Toronto that do that work, but I think having a city museum with the contemporary arc is super important, especially because we’re one of the most diverse cities in the world.”

36 Questions that Lead to Loving TO is based on a 1997 experiment done by Arthur Aron, a psychologist who studied how intimacy manifested between strangers or near-strangers by having them share their answers to increasingly personal questions with each other. His work was popularized by a 2015 New York Times article titled “The 36 Questions that Lead to Love.” The article included the questions from the original study, which are divided into three sections and range from the fairly banal (“Would you like to be famous? In what way?”) to the quite probing (“If you were to die this evening with no opportunity to communicate with anyone, what would you most regret not having told someone? Why haven’t you told them yet?”).

Fittingly, given Toronto’s “The 6ix” nickname, 36 Questions that Lead to Loving TO is divided into six stations with six questions each. Going to the exhibit with a partner is not necessary, though it is welcomed, and visitors need not fear that they will be subjected to the four-minute-long silent eye contact described in the New York Times article. The project space is open and features bright colours, allowing visitors to move through it however they like – while the stations are numbered, the layout of the gallery makes it possible to do them in any order.

The six activities are a mix of digital and analog forms, and incorporate both audio and visual elements, encouraging participants to share more of their personal experiences as they go. The first station asks visitors to answer multiple-choice survey questions on an iPad, and then shows them how their answers compare to those of previous visitors, situating them in a larger narrative. The second station involves six fill-in-the-blank prompts, such as “I wish more Torontonians cared about…” and “Every Torontonian needs to experience…” Here, rather than being limited to pre-selected options for their responses, visitors can hand-write whatever answer comes to mind on cards and hang them from pegs, as well as flip through cards that other people have left.

Handwritten responses feature in the third and fourth stations as well; the third, Play Cupid, cheerfully leans into the love theme with large pink and red hearts suspended from the ceiling, and answers are written on arrows that can be stuck into the hearts. The fourth station features a large map of Toronto, and invites visitors to place coloured flags on the map in response to the prompts. Despite the playful nature of these stations, not all the questions request positive experiences – one large heart is to be filled with arrows stating the worst parts of living in Toronto, while one prompt on the map asks visitors to point out the places in Toronto where they do not feel welcome.

The last two stations provide the most space for dialogue and detailed messages. The TO Love Line features listening areas enclosed by colourful blinds, with the opportunity for visitors to call a phone number. They can leave voicemails about both their treasured memories of Toronto and their disappointments about the city, and listen to recordings of other people recounting their own stories. Finally, visitors are given paper and pens to hand-write and “mail” a letter, again answering any of six questions about their life and experiences in Toronto; once completed, they can take a letter from a previous visitor and bring it home with them.

“The idea is visitors taking away a greater understanding of their relationship to the city and a greater curiosity about the city,” says Reitmaier. “We’re hoping that people will come with friends, family, loved ones, maybe strangers; we hope people might learn a nuance or a difference about the city through an exchange they might have with someone else.” Myseum leaves the scale of discovery up to the visitor – it might be as small as finding a new restaurant to try, or as transformative as introducing entirely new ways of understanding the city. But Myseum also hopes to do its own learning about Toronto through 36 Questions that Lead to Loving TO – the responses and experiences visitors share could help guide the stories Myseum chooses to tell in the future.