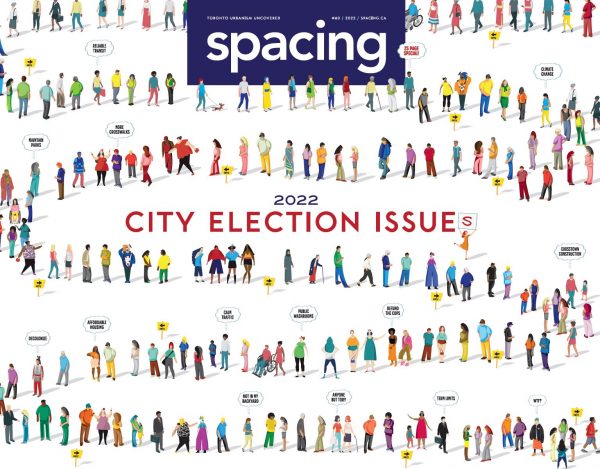 Once upon a time, Toronto had ambition. While it was much mocked for wanting to be a “world-class city,” at least it had a goal. Now, with more cranes dotting the skyline than any other city in North America, Toronto might be said to have achieved that goal. But rather than trying to reach even further, Toronto’s public discourse has fallen into complacency, content to muddle along even as huge challenges loom on the horizon.

At Spacing, we want to bring ambition back to Toronto. Those huge challenges – climate change, housing, inequality, even good ones like rapid growth – also offer an opportunity for fundamental transformation. Let’s look forward to what kind of city we want to be in a few decades, and start talking about how to get there.

Elections are where Toronto’s residents have a chance to choose the people who will set the city’s course towards the future. As a magazine dedicated to advocating for a better city, when an election looms, Spacing has always put out an election-focused issue to help shape the debate.

So, ahead of our next municipal election, in our 2022 election issue we want to direct the focus onto those big picture questions. To get that focus, we’ve bundled the many small issues of municipal politics into five broad areas that shape the city: engagement, mobility, sustainability, building, and wellbeing. For each one, we have a big-picture essay exploring where we want to go, a case study delving into one way we could get there, and a profile of a local organization working to make the city better.

The impending threat of climate change demands a complete transformation in how our city works. Rapid growth is putting huge demands on housing and mobility. Facing up to the impacts of racism and inequality requires us to fundamentally rethink our priorities. To face these challenges, we will need all of the city’s residents to engage with their city, at a time when many find the nature of civic discussion increasingly alienating.

Readers will quickly see how the five themes interact with each other. Sustainability requires a move away from being a car-dependent city. That move depends on building denser housing to support transit and local services in walking and cycling distance. That housing needs to be affordable to improve wellbeing and address inequality. And wellbeing and equality is the foundation for generating the sense of engagement in all residents that’s needed to carry these transformations through.

We hope this issue inspires our readers to start discussions with fellow voters and ask candidates questions that force them to look beyond the immediate future and think about our longer-term vision for Toronto.

To warm readers up for these big ideas, our front section, as always, brings a lighter touch to thinking about what how we use public spaces in our ever-evolving city. A photo essay explores the urge to build stick forts in our parks; other pieces look at the increasing role of private basketball courts, how to make parks more welcoming to teen girls, the need for public washrooms, and the city’s new digital infrastructure strategy.

Finally, a couple of articles follow up on earlier pieces. In a sequel to last issue’s feature about Toronto’s early-twentieth-century newsboys, Beth Simons tells the compelling story of how they formed a union and fought for their rights. And Shari Kasman wraps up the story of Bloordale Beach, first featured in issue 55, which transformed an empty construction site into a playful if ephemeral community space.

There’s an old saying about not seeing the forest for the trees, but the fact is that both are necessary. We need to consider both the details and the big picture. Pick up the issue at the Spacing Store or on newsstands now to discover the individual stories and the big picture of Toronto now and in the future.