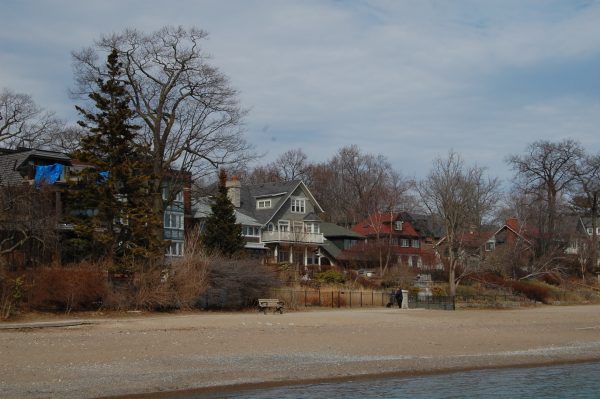 Toronto historian Richard White has recently completed an original new history of the Beaches neighbourhood that should be out and available sometime next year (U of T Press). As a pre-publication spin-off, he has just launched a novel website he calls “‘History in the Everyday Landscape” in which he identifies ten historical “sights” (not sites) that, as he reads them, have all sorts of neighbourhood history to tell us. Here we cross-post his Sight #2, which will be of particular interest to anyone who has wondered why the Beaches boardwalk stops abruptly at Silver Birch Avenue.

When Eastern Beaches Waterfront Park was conceived in the early 1920s, it was to run the full length of the neighbourhood, from Woodbine Avenue to the city limit at Victoria Park Avenue, and the City began expropriating beach and water lots accordingly, from one end of the neighbourhood to the other. Then when the City decided, in 1930, to widen the park with a strip of inshore land it acted with the same intention – parkland all the way to the city limit (See Sights #3 and #5). But expropriating this additional land turned out to be more troublesome because, unlike the beach, it was occupied by scores of structures – cottages, boathouses, small hotels, and substantial homes – that its owners, understandably, did not want to give up.

So as the City, in 1930, moved forward on expanding the public park it had to reckon with the fact that the privately owned clubhouse seemed to have a right, perhaps in perpetuity, to occupy the public property on which it stood. Faced with this curious, and not entirely understood, situation, the City backed off, leaving the clubhouse as it was. It did expropriate and demolish the block of lakefront houses east of the clubhouse, from Willow to Silver Birch, and this property it included in the park, but it went no further east.

Two years later, with the new waterfront park already being heavily used, the City considered expropriating what remained of the lakefront housing, from Silver Birch east to the city limit. But upon learning the estimated cost of this expropriation – $750,000 – city council balked again, and the matter seems never to have been revisited.  The consequence of this decision, for better or worse, is with us still, for it left intact one the of the few places in Toronto with private housing on the beach.

The beach itself, of course, was (and still is) entirely public, having been expropriated in the 1920s before the acquisition of inshore property was even considered, so by leaving the beachfront houses in private hands the City created an unusually stark border between public and private domains. Over the years the owners of these properties have asserted their ownership with various fences and walls, and, in front of the westernmost properties – all with the same owner at the time – a now nearly buried thick concrete retaining wall. Humans walking on the beach have learned to respect the private property signs; canine visitors – this being their leash-free zone – maybe not as much.

By far the largest private structure left standing by this decision, and likely one of the main reasons for the decision, was a substantial apartment building – assessed at $42,000 in 1932 (see blueprint above) – that had been erected a few years earlier by local builder George S. Gardiner (sometimes spelled Gardener). It stands to this day, highly visible – and anomalous – to anyone walking along the beach.

The large lot on which it was built had been created in one of the area’s earliest acts of subdivision, in 1887. Still intact as a single property in 1924, the lot was large enough for Gardiner – who had owned it for some time – to propose demolishing its old wooden structures and erecting a brick twenty-suite apartment house with an automobile garage at back and ample beachfront space in front. A City of Toronto bylaw, in place since 1912, prohibited the construction of apartment buildings on residential streets, so anyone wanting to build one had to first obtain permission from the City to transgress the bylaw. This was not as hard as one might think; other neighbourhood property owners in these years had requested and been granted such permission. Gardiner applied to the City, along with a sketch of what he planned to build.

The Building Commissioner’s customary practice upon receiving such as request was to write nearby property owners asking whether they would agree to the bylaw transgression and permit the proposed building. For this proposal the Commissioner sent letters of inquiry to thirty-five nearby owners. Only two approved while fifteen opposed. But eighteen did not reply, and with just fifteen of thirty-five (not a majority) explicitly opposed, the Commissioner felt compelled to approve it – without the garage.

What we are seeing when we look east of Silver Birch is, primarily, a parsimonious city council – something that has shaped Toronto more than we realize – but in this one anomalous lakefront building we are seeing something else: citizen consultation 1920s style, in which indifference was a vote in favour.