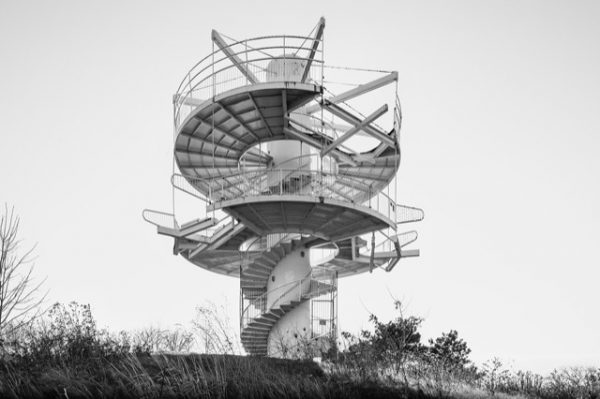 In advance of Spacing’s upcoming issue focused on Ontario Place, we are sharing some of photographer Steven Evans’s images of the site. See his website for the full three sets of photos.

I first visited Ontario Place as a teenager, some 50 years ago. Ontario Place had just opened, and I remember my sense of wonder at this exotic engineering achievement, perched delicately off the shore like a futuristic city. I bought into the idea that my province and my city were places of great promise. From the novelty of watching North of Superior at the then-revolutionary IMAX Cinesphere, to exploring the grounds, Ontario Place was my one of my first tastes of unsupervised downtown adventure.

A few years later, I returned with my new girlfriend to take in a concert at the original Forum. We joined the audience on the hills surrounding the revolving stage as the sun set for an evening of music, which was mostly lovely except for an embarrassing misstep on my way back after intermission and falling head over heels from the top of the hill in front of hundreds of concertgoers. Fortunately my date (now life partner!) didn’t witness this part of the Ontario Place spectacle.

It would be a while before we returned, this time with two young children. I had just started my career as a photographer and money was tight. Ontario Place was accessible and inexpensive, and our kids really enjoyed several visits to the Children’s Village – which included the unruly and exciting playground covered by a huge orange canopy and the spectacular waterpark with its terrifyingly high water slide. However, the spectre of problems was rising. In the face of competition from the newly opened Canada’s Wonderland amusement park, Ontario Place’s efforts to increase attendance and revenues inevitably took away its lustre and appeal. It started to feel commercial, prices rose, and the site began to look and feel tired.

Years passed before I would make it back. COVID had taken grip on all our lives, and my countless “therapeutic walks” through Toronto’s parks and ravines eventually led back to the Ontario Place shoreline, where once again I found myself admiring the architecture and the beauty of the surrounding landscape. Time and mismanagement had taken a heavy toll. The Cinesphere and Pods were rusty, their crisp white surfaces dulled by years of accumulated grime and neglect. The once-colourful Commons was boarded up and the Children’s Village had disappeared. The circular tower to the beloved water slides stood alone overlooking a vast concrete field, and the Forum, which had been replaced by the Molson Amphitheatre, had now become the Budweiser Stage. The Wilderness Adventure Ride lay abandoned and decaying like the movie set of a Western ghost town— its allusion to a natural wilderness being subsumed by the real thing as it becomes an inadvertent nature reserve under threat from current development plans.

This is Ontario Place at a physical, political, and economic crossroads. It seems an important moment to record it, as a reminder of what it once was, and to consider what it can become. These images of Ontario Place’s architecture and landscape are part of an ongoing personal photographic documentation entitled “As Is,” which I hope to publish and exhibit in the near future.

With thanks to Peter McCallum and Beth Kapusta. 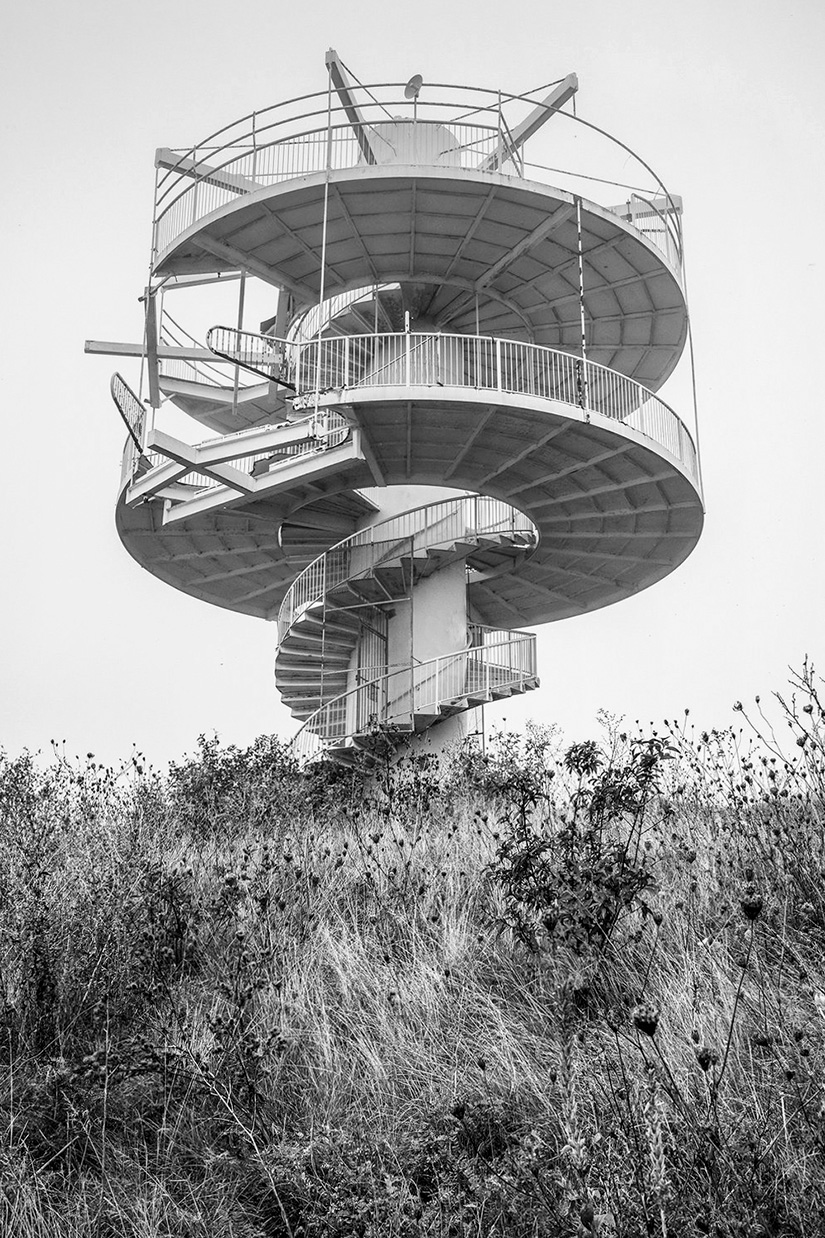 The solitary remains of the now-defunct waterslide tower. 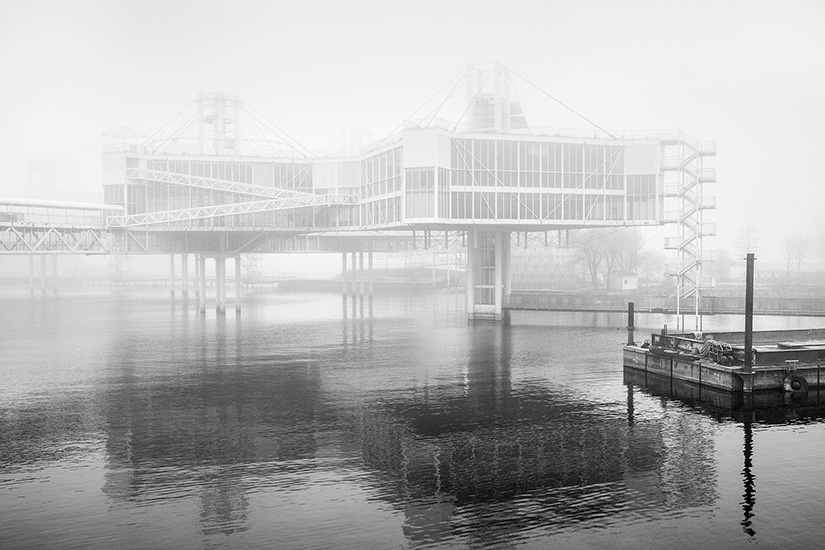 The Pods are steel and aluminum structures connected by bridges and suspended above the water. They originally housed a restaurant and exhibition spaces. 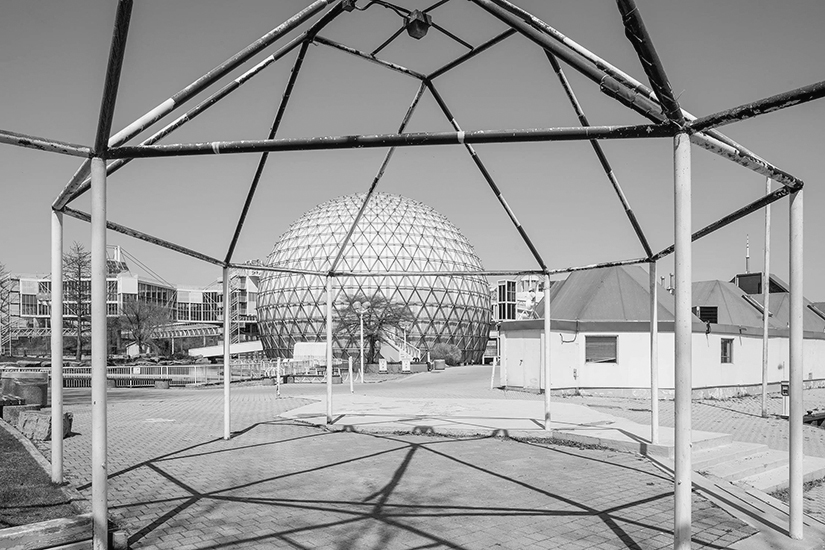 The Cinesphere is a triodetic dome that still houses the first permanent IMAX cinema in the world. 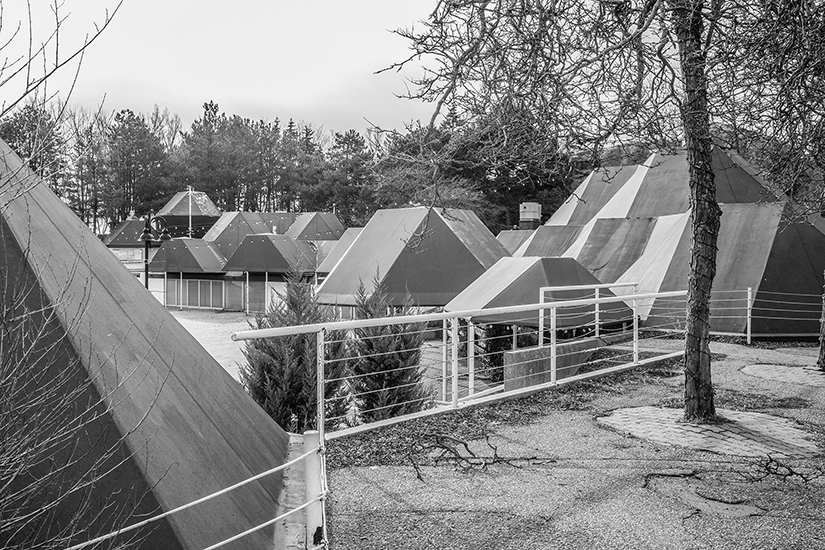 Roofs of the dilapidated modular buildings that housed shops and restaurants. 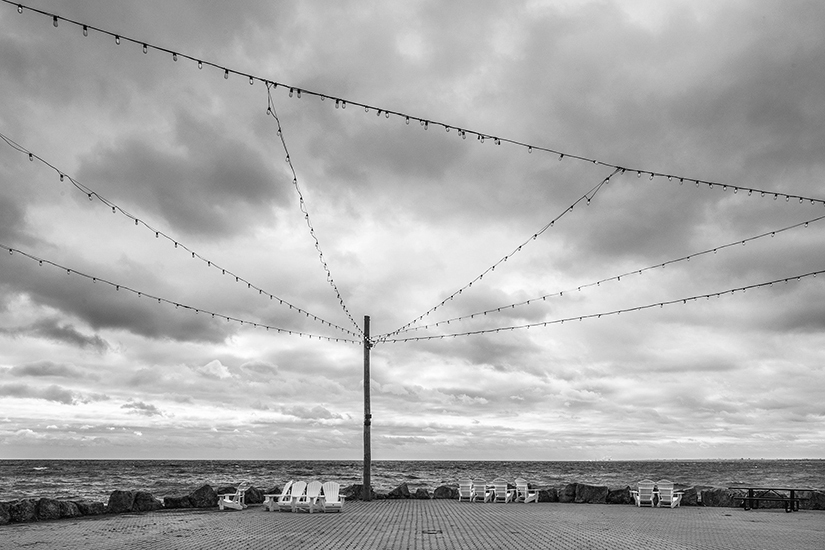 The former helipad for National Helicopters is now rented out as an event facility. 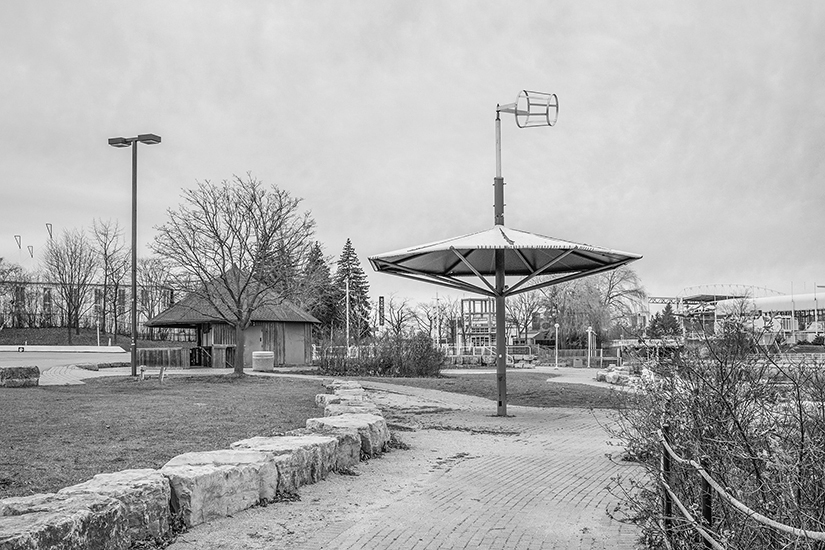 The grounds of the former Children’s Village and Market Square. 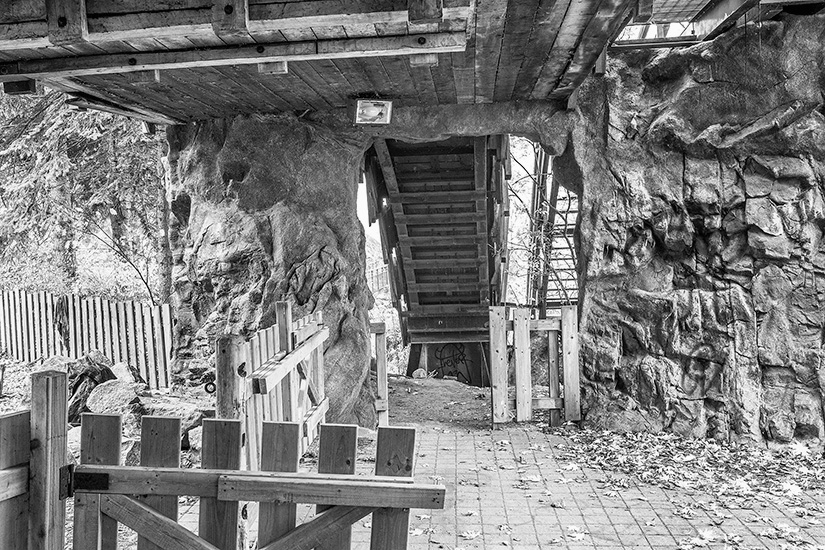 Under the chute of the Wilderness Adventure Ride. 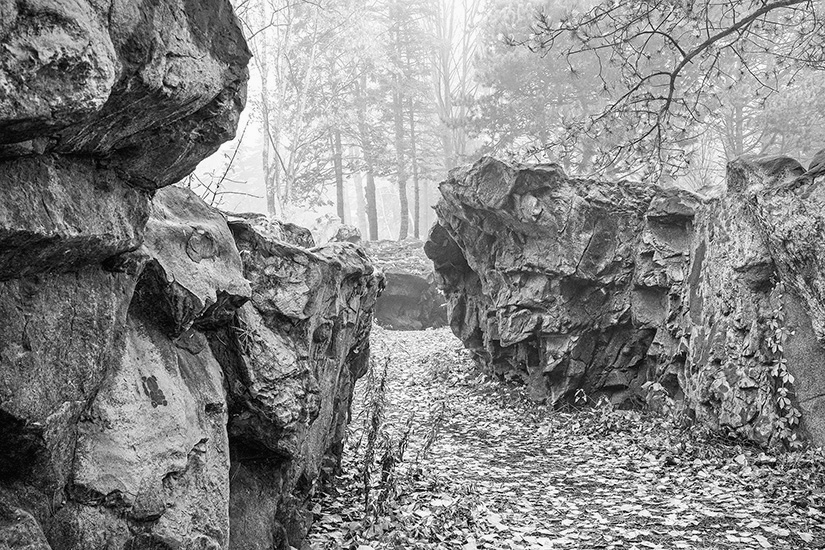 A simulated northern Ontario landscape is part of the stage set for the Wilderness Adventure Ride. 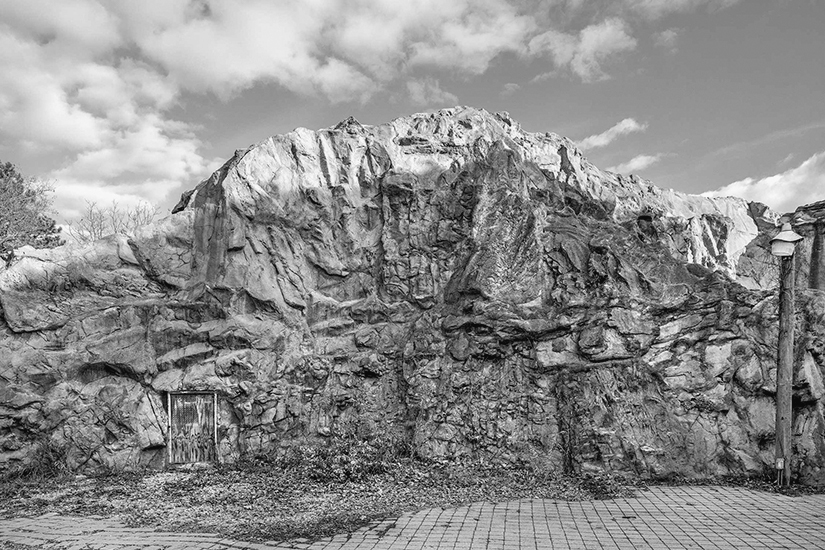 A convincingly fabricated rock face is part of the Wilderness Adventure Ride. 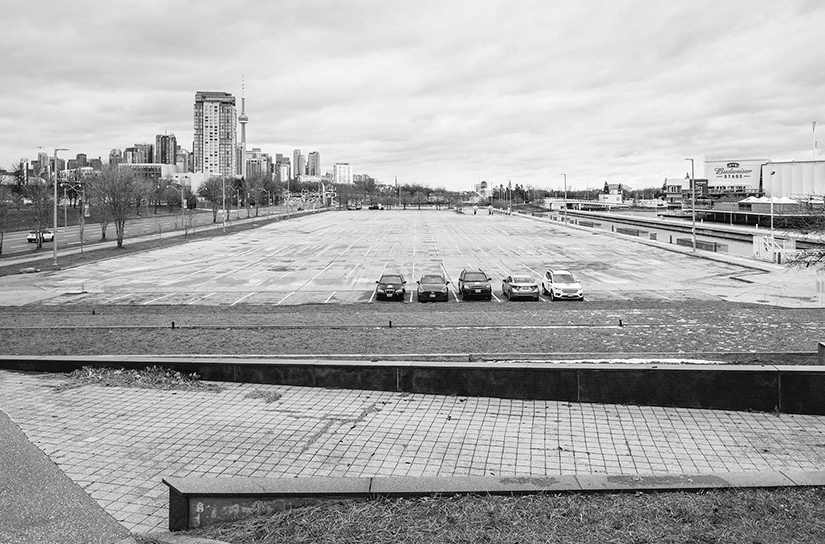