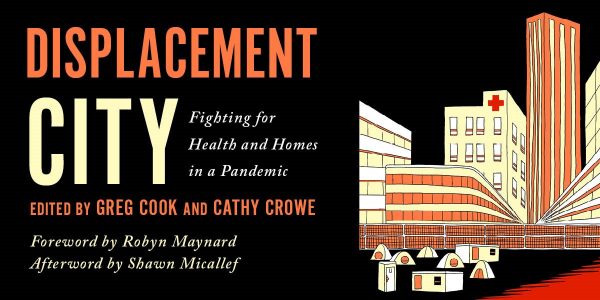 The following is the afterword by Spacing‘s Shawn Micallef in the new book Displacement City: Fighting for Health and Homes in a Pandemic published by University of Toronto Press (you can purchase it through the Spacing Store website or stop by the shop at 401 Richmond Street West). In Displacement City, outreach worker Greg Cook and street nurse Cathy Crowe present the stories of frontline workers, advocates, and people living without homes during the pandemic. The book uses prose, poetry, and photography to document lived experiences of homelessness, responses to the housing crisis, efforts to fight back for homes, and possible solutions to move Toronto forward from this humanitarian disaster.

A city that is one of the richest places on earth, where supercars roll through the streets, cranes keep putting up skyscrapers, and money keeps being made. It’s possible to walk for an entire afternoon or ride a bike for a few hours through neighbourhood after neighbourhood of incredible wealth, of multi-million-dollar homes, many of them once considered working-class dwellings. Where does all the money come from? How can there be so much of it? Even with some familiarity of the economic foundations of Toronto, it still doesn’t feel like the physical size of wealth here, the sprawl of it, is possible. It seems vast and never-ending, and then, of course, it ends.

The starkness of the “end” of wealth here was magnified by the pandemic, with tent encampments appearing in parks and ravines, built by people trying to escape a shelter system made inadequate and dangerous by both the pandemic and systemic issues. This end of Toronto was, to be sure, always here. The “Toronto the Good” or “New York run by the Swiss” narratives were convenient myths that always obscured the inequity here, even if it was in plain view. Toronto was never without those who didn’t get to share in the prosperity of this place that has, through its history, had more boom times than not.

There was The Ward neighbourhood, one of those inconvenient inequalities that existed right next to prosperity in the form of Old City Hall, a Victorian trophy of sorts for a proud mercantile city. It was no wonder then that The Ward and its shacks and privies, its burlesque halls and immigrant enclaves, were bulldozed to get it all out of sight but also to create a clean slate for a new symbol of postwar boom times. New City Hall rose as Toronto coasted into the last half of the twentieth century as a magnet for immigration across Canada and around the world, but it erased something too. Toronto doesn’t much care for seeing the poor.

The prosperous story of Toronto in the last decades was slowed down by the recession of the early 1990s and then the doldrums created by the amalgamation of Metro Toronto in 1998, but it soon boomed again and has never really stopped booming since: the city kept building and growing even as the United States went into a deep recession in 2008. When would, or will, the Toronto bubble pop? That particular question hasn’t had an answer yet, but perhaps a better question is when will we collectively recognize the partial deflation of the Toronto bubble?

Despite these decades of growth and of the kind of success that make most North American cities envious, the divides that were always here grew as the most basic necessity of life, housing, has become a crisis of access, affordability, and livability. The city is a real estate money-making machine for some, but Toronto is increasingly a desperate and hard-to-live-in place for many others. The question “is it even possible to live in Toronto?” is being raised often, and many people have already made their exit. Indeed, if it wasn’t for immigration, Toronto’s population would actually decrease with this steady stream of outward migration, another fact contrary to the city’s popular mythology.

Left behind are the hundreds of thousands of people without much of an option to move away, the people who keep this place running, the ones who used to be able to afford the shacks that sell for millions of dollars now. Their place in the city has been pinched and squeezed and made more uncomfortable. Even middle-class people, once the foundation of the city, wonder if they, or their kids, will be able to live here. It wasn’t always this way though.

On those long walks or bike rides through the city there’s something else to notice: the incredible amount of affordable housing that was built in the few decades after the Second World War. A lot of this housing was stand-alone or semi-detached housing, an incredible building boom that grew as the boomer generation exploded, encouraged by the Canadian Mortgage and Housing Corporation and various government policies. The idea behind it all was that Canadians needed secure housing if this country was to prosper. It was nation-building, not just home-building.

More importantly, actual affordable housing was built. Out of the city centre into what were once the suburbs but now are as much “the city” as downtown, social housing of various kinds was constructed in the form of low- and high-rise apartments, townhouses, courts, and other sometimes unique configurations. The ubiquitous slab apartment building is a Toronto architectural look if there ever was one, built in the style of the day with gusto.

By the 1980s, the slabs and brutalist apartment blocks had evolved into a postmodern style, with quirky references to older styles of architecture and a pastel palette of pinks, greens, and oranges, with some darker accent colours here and there, like the series of co-ops on Lake Shore Boulevard in New Toronto, built on the site of the former Goodyear factory, or the Hugh Garner co-op in Cabbagetown. On a long wander, these sorts of buildings will often turn up in slivers of land next to transportation or utility corridors, as the choicest land was most often scooped up by the stand-alone homes earlier, though there are some stunning ravine-edge locations that give the impression of a space-age utopia, buildings rising out of a green canopy.

The postmodern buildings are particularly striking, not just because the style fell out of favour quickly by the mid-1990s, but because they represent the last great era of affordable housing in Toronto and Canada. In 1993 the federal government got out of the business of funding housing with Finance Minister Paul Martin’s austerity budgets, followed by Ontario leaving the game when Premier Mike Harris was elected in 1995, and then the maintenance budgets of the existing stock were starved and those buildings began to decay and affect the quality of life of the people in them. We, as a civilization, decided something as essential as housing should be left entirely to the market, and thirty years later the effects are evident.

Another factor is just how few places it’s possible to build in Toronto. Though it appears there’s a lot of new construction – and there is, but not enough – it’s limited to relatively few places, as much of the city is off limits to even the gentlest additions of density due to exclusionary zoning. This is why so much of the dense housing, truly affordable or not, is relegated to the corridors with the most pollution. Think of Liberty Village, a place scorned for its density by people with backyards, wedged in between the Gardiner Expressway and two rail corridors, all of them linear carbon bonfires, spewing pollution. What messages does Toronto send to its current and potential residents by pushing density, and humans, to busy streets and worse?

All of this, the intentional limiting of where housing can be built and the absence of housing programs on a scale that would make even the slightest difference, makes the violence of encampment evictions even more egregious. The profound meanness of Toronto has been in full view these past three years, as has its long tradition of wanting to get what makes it uncomfortable out of view. What we have witnessed is a profound failure of empathy.

Is this the kind of city Toronto is?

Shawn Micallef is the author of Frontier City: Toronto on the Verge of Greatness (McClelland & Stewart, 2016), Stroll: Psychogeographic Walking Tours of Toronto (Coach House, 2010), and The Trouble with Brunch: Work, Class and the Pursuit of Leisure (Coach House, 2014). He is a weekly columnist at the Toronto Star, and a senior editor and co-owner of the independent, Jane Jacobs Prize–winning magazine Spacing. Shawn teaches at the University of Toronto and was a 2011–12 Canadian Journalism Fellow at Massey Colllege. In 2002, while a resident at the Canadian Film Centre’s Media Lab, he co-founded [murmur], the location-based mobile phone documentary.