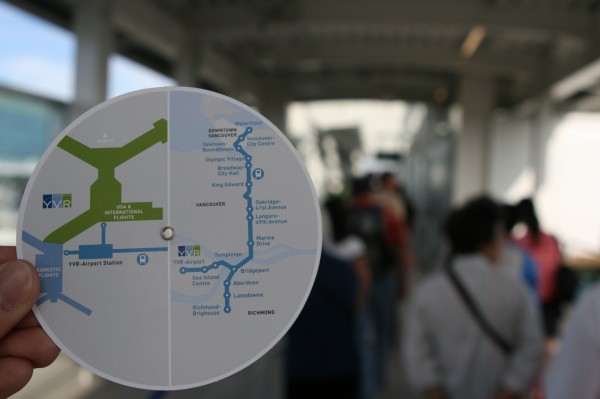 Poor Evergreen Line. You’ve been talked about for so long that we thought you’d already been built. But no, here it is 2011 and all we have is a project office.

Let’s back up a bit. The Evergreen Line was originally supposed to have been the second phase of the Millennium Line, which now stretches from VCC-Clark station in Vancouver to Columbia station in suburban New Westminster. Phase two was supposed to push east, connecting the 11 kilometres between Lougheed Town Centre and Coquitlam, but due to a change in government and higher than anticipated construction costs, it was never built, save for a portion of a station at Lougheed. The 97 B-Line express bus service was put into place at the time of the completion of the Millennium Line, but with 17 stops along the way at a travel time of about 30 minutes (double the time of an automobile trip), it hardly qualifies as an express service.

Many have said that there is not enough ridership to justify the construction of a SkyTrain system on the route, especially when other corridors in Vancouver and Surrey already have the ridership to justify a rapid transit system of some kind. While the community has consistently called for the more cost-effective light rail option, the provincial government has been convinced that SkyTrain technology must be used to avoid the dreaded transfer. While this author believes that if service is frequent enough, transfers are a non-issue, the matter has already been decided. The Evergreen Line will be an elevated rapid transit line and, at $1.4 billion, very costly one. Travel time between Lougheed Town Centre Station and Douglas College Station would be about 13 minutes, with trains arriving every 3 minutes in peak periods.

The provincial government has promised $410 million, the federal government $417 million, and project partners $173 million towards the project. That leaves TransLink to pay the remaining $400 million. The issue is that TransLink doesn’t have the money to expand bus service in already congested corridors, much less fund its portion of the Evergreen Line, and so far there has been a deadlock in the conversation around other funding alternatives. The province has been  fixated on the idea that TransLink should simply increase property taxes to make up the difference.

This is not a great idea. First of all, most Metro Vancouver residents already feel that property taxes going to TransLink are high enough (and increasing by 3% per year), and local mayors have backed them up on this. More importantly, though, is that fact that there is no connection between property taxes and transit use. A property tax will not dampen automobile use. Rather, when taxes are not tied to demand management, increasing property taxes will only turn people against the idea of a regional transit body.

So what is needed? Fees that discourage excessive driving as well as the purchase of vehicles that use large amounts of fuel. These fees could include the gas tax, a vehicle registration fee tied to engine size, a parking tax, road pricing (congestion charging, tolls on new and existing bridges and highways), and using carbon tax revenue for transit improvements. And, much of this money needs to be funneled into projects that  benefit areas outside of Vancouver that now have truly inadequate transit service.

The hard part, of course, is that no one likes to pay more for anything. On the flipside, we do like shiny new infrastructure that gets us to our destination more quickly, and in style. Witness the Canada Line, which is already generating daily ridership of 110,000 passengers a day, beyond what was expected by 2013. Look at the 550,000 people who rode the Olympic Line during its short 60-day stay in our city. It will be impossible for transit mode share in Metro Vancouver to significantly increase without some form of rapid transit, whether it takes the form of bus rapid transit, light rail, or regional rail.

So our local mayors, particularly Richard Walton of the District of North Vancouver and Pamela Goldsmith-Jones of the District of West Vancouver, deserve our praise and support for their courage in going forward with a proposal to increase the gas tax by two cents a litre. This would bring in $40 to $43 million of revenue per year, enough to get the project off the ground.  Another $70 million from other sources would be needed.

The carbon tax would help. With roughly 50% of the population of the province, Metro Vancouver could get a whole lot of transit for its share of the carbon tax revenue, which amounts to about $270 million per year. An improved transportation system would benefit the average person in Metro Vancouver far more than corporate tax cuts, which is where much of the money currently goes. A graduated vehicle levy, which increased based on engine size, would not only provide raise money for TransLink, but also encourage drivers to buy more fuel efficient vehicles. With about 1.5 million vehicles in Metro Vancouver, even a $50 vehicle registration fee would yield $75 million per year.

A trickier issue would be road pricing. And it’s an issue that will undoubtedly come to a head within the next 5 years. With the completion of the new Port Mann bridge, Surrey will have the only two tolled bridges in the region connecting it across the Fraser River. But then there’s the replacement of the Pattullo Bridge, which is likely to take place soon. If that bridge is tolled as well, Surrey and other South of the Fraser residents will have to pay anytime they cross the Fraser, unless they would like to take a long detour across the Alex Fraser Bridge. Tolling the Pattullo Bridge will not be a popular move, to say the least. Surrey should not be unduly penalized simply because its bridges are newer. A road pricing plan for the entire region needs to be put on the table and hashed out amongst Metro Vancouver municipalities well before the Pattullo is replaced.

The need to fund public transit is growing across Canada, but the debate seems to be stuck in old formulas. New public transit infrastructure has usually been funded with one-time grants that address current needs, rather than from a continuous revenue streams that can be used to build for future growth. We’re always two steps behind. Yes, a gas tax increase makes sense to fund regional transit. But far more money is required to get beyond playing catch up and to fund a regional transit system that provides equitable transit service across municipalities. A small increase in the gas tax won’t get us there.

All potential revenue sources for TransLink, especially the carbon tax and vehicle registration fee, need to be on the table. Kudos to our mayors for starting the discussion. Now is the time to support them. If there is to be a new paradigm in public transit funding in Canada, it should begin here and now.