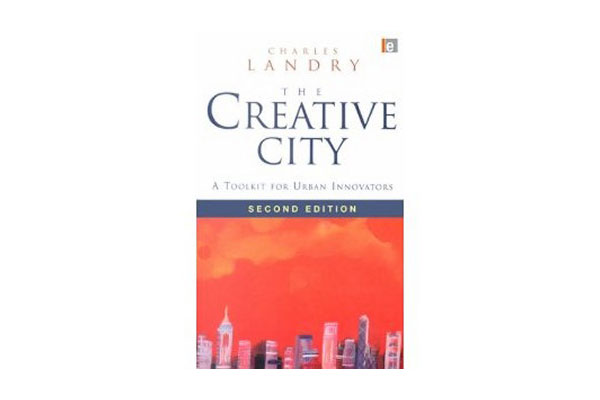 Creativity, as a subject, has been of growing interest over the past few decade. What is it? What factors contribute to its creation? What strategies can be used to induce creative ideas? These are just a few of the questions that researchers have sought to answer.

Well-received popular books – like Edward De Bono‘s Use of Lateral Thinking – have pushed forward the importance and power of “thinking outside the box” in all facets of daily life. More recently, books such as Tom Sawyer’s Explaining Creativity: The Science of Human Innovation have demonstrated how creativity is harnessed within a variety of disciplines – and not just the fine arts – and the principles that facilitate creative thought.

Yet despite all the interesting work being done, rarely is innovation and creativity discussed in the context of cities. Aside from a handful of books and texts – one of the most popular being Sir Peter Hall’s Cities in Civilization – this aspect of creative thought has largely remained undiscovered territory. This fact makes Charles Landry’s The Creative City: A Toolkit for Urban Innovators that much more significant in our times where culture and imagination are showing us definitive solutions to the challenges of the future.

This excellent book is structured into four parts – Urban Groundshifts, The Dynamics of Urban Creativity, A Conceptual Toolkit of Urban Creativity, and The Creative City and Beyond, respectively – each of which is divided into three corresponding sections and subsections.

However, before diving into the four parts, The Creative City begins with one of the most in-depth and complete introductions I have read to-date.  At 30 pages long, this well-written, accessible, and concise preamble sets a definitive foundation for the book. It argues for the need to develop a culture of creativity within the bureaucratic structures that govern cities, the reassessment of regulatory and incentive regimes, creativity as an asset for the creation of wealth and legitimizing the use of imagination within the public sphere…..and this is only in the first two paragraphs!

The introduction then follows a strong and sequential path legitimizing its argument by drawing on a variety of insightful references and observations – from creativity as the new currency to the nature of the emerging creative class and what they look for in cities, and the different types of “capital” within our urban centres. Importantly, it also highlights creativity as fundamental at all stages in a particular urban initiative – from its inception through to its development. As such, it is less an introduction and more a summary of the entire content of the book distilled to its essentials. Fantastic in itself, I would argue the introduction alone is worth getting the book.

From this solid base, the book launches into the first part – Urban Groundshifts – that delves into the roots of urban creativity and its relevance to the contemporary city. As such, it provides a concise overview why some cities are more successful than others, the intricate relationship between culture and creativity, and the importance of imagination as a means of finding solutions to the complex problems that confront cities in the short- and long-term future.

Throughout this part (as well as the second and third parts), the main content is peppered with a number of sidebars that succinctly describe several interesting creative initiatives in cities – big and small – throughout the world. This really serves to contextualize the aspects being described by the author and to see how creativity is being applied directly across cultures around the globe. All of them are extremely interesting and opened my eyes up to the diversity of powerful creative actions that are providing meaningful solutions to urban problems – from social welfare to urban literacy. These are excellent catalysts for further investigation.

The second part, The Dynamics of Urban Creativity, considers the characteristics required for creative urban endeavours. It starts off with four case study projects. Two of these are long-term projects – the Creative Town Initiative in Huddersfield and the Helsinki Maximizing Creative Potential Programme – and were worked on by Comedia, the author’s own practice. The author was not involved in the other two projects covered – the IBA-Emscher Park projects in Germany and the European Union’s Urban Pilot Projetcs programme.

This is followed by a description of the preconditions instrumental to beginning and sustaining the “Creative City”. This section hits upon several important themes – from the will and leadership needed through the importance of human diversity and drawing in talented people, to fostering a strong local identity and the key role of the public realm.

The part ends with an excellent description of “creative milieu”, defined as “…a place – either a cluster of buildings, a part of a city, a city as a whole, or a region – that contains the necessary preconditions in terms of ‘hard’ and ‘soft’ infrastructure to generate a flow of ideas and inventions….a physical setting where a critical mass of entrepreneurs, intellectuals, social activists, artists, administrators, power brokers or students can operate in an open-minded, cosmopolitan context and where face-to-face interaction creates new ideas, artefacts, products, services, and institutions and as a consequence contributes to economic success.”

As the title of the third part suggests, the focus of these chapters is on giving readers a set of techniques, indicators and tools for getting creative urban thinking started – what Landry calls a “conceptual toolkit.”  Although he is careful to state the assumptions behind the toolkit and states that the approaches given are in no way comprehensive or exhaustive, this part outlines some superb, down-to-earth strategies for implementing the Creative City idea.

Based on the knowledge and experience gained through his private practice, the pragmatic recommendations within this part importantly provide an in-depth explanation of the four stages required to plan and carry out the Creative City agenda: a five-step planning process, the application of a set of analytical tools (i.e. the “urban innovations matrix), indicators used to measure civic creativity, and techniques that aid creative thinking and planning. As such, this part is an important unofficial finale to a book that takes the reader from the academic understanding of creativity to effective actions that can be carried out.

The Creative City and Beyond, officially concludes the book connecting creativity to sustainability and describing the domains in which creativity and innovations are required in the future – a great ending to an already exemplary book.

As I’m sure you can tell, I thought this book was exceptional. Not only because it speaks to an issue that is rarely discussed within the context of cities and urbanism, but also due to both breadth and depth of the subject discussed. That this was written in an extremely accessible manner and offered practical ways to help others instigate creative actions in their respective cities makes it that much more significant.

As such – and although it is 4 years old – I would recommend it to anybody interested in creativity as it applies to urban centres. But the nature of the content makes it particularly valuable to planners, politicians, policy-shapers, activists, and grassroots organizations that are the foundation for creative actions.

For more information and a sample chapter, visit here.

Erick Villagomez is one of the founding editors at Spacing Vancouver. He is also an educator, independent researcher and designer with academic and professional interests in the human settlements at all scales. His private practice – Metis Design|Build – is an innovative practice dedicated to a collaborative and ecologically responsible approach to the design and construction of places.