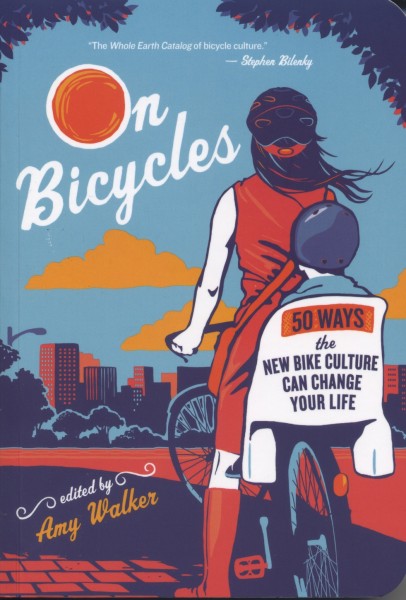 There is no doubt that cycling culture is changing and becoming more popular as a means of traveling around the city.  This being the case, there seems to be new cyclists hitting the streets everyday and it is precisely for those beginning to make cycling a greater part of their life that Amy Walker’s new book, On Bicycles: 50 Ways the New Bike Culture can Change Your Life, is particularly relevant.

Edited by Walker, the book contains contributions from people from all points in the cycling spectrum and although targeted towards new cyclists, it provides something for cyclists at all levels like should you be using a recumbent bike or indoor cycle. Topics touched upon within the book range from choosing a cycling shop for your first bike to the ins and outs of “freak bikes”.  The Cascadia Region is well represented by prominent local cycling champions like Jeff Mapes (Pedaling Revolution; Portland, OR), Amy Walker herself (Momentum Magazine; Vancouver BC) and the late Terry Lowe (VACC, Momentum Magazine; Vancouver BC).

On Bicycles is first and foremost a guide to cycling culture, outlining many sub genres, new cycling trends and advocacy.  It opens with the benefits of cycling—convincing arguments for those still on the fence and reinforcement for seasoned veterans—such as physical fitness and environmental advantages, as well as the simple fact that it is simply an enjoyable and pleasurable activity.

For those just starting out, there is also a lot of instructional information contained within the book. On Bicycles is particularly great at doing away with the preconception that cycling is solely a recreational past time and getting people to look at their bikes as a tool that can be integrated into their daily lives by covering the basics like issues how to use and outfit your bike for a shopping trip, and how to prepare for riding in the rain.

For seasoned cyclists who know much of this fundamental content already, the sections on culture and advocacy will be of most interest. For example, the book talks a lot about “New Bike Culture” which is about integrating cyclists and automobile traffic  within the city at large, in a safe and respectable manner.  Many cities, including Vancouver, have seen great changes and improvements to cycling infrastructure in recent years and the increased numbers of cyclists have come as a surprise to many motorists.

With so many new cyclists on city streets roads and gaps in cycling infrastructure networks—in combination with a lack of knowledge, etiquette and understanding on both sides—conflicts are inevitable.  Proponents of new cycling culture understand this and want to make things better.  The new bike culture wants you to ride with your kids, get your kids to ride to school, get you riding to the grocery store and on your vacation.

If you are not already a bona fide cycling convert this might all seem pretty pie-in-the-sky, unrealistic or even dangerous.  The last section of On Bicycles takes these concerns and lays out a map on how to deal with them.  The focus is on education. As a cyclist, one need to know their rights and how to travel safely.

It also covers other things you can do on an individual basis to influence your friends, family and co-workers.  For example, you can join an advocacy group like HUB (formally the Vancouver Area Cycling Coalition) to go further and make changes as the municipal level to improve infrastructure and make bikes more prominent on the cityscape in terms of parking, bike shares and bike lanes.

The perceived safety of cycling is still one of the greatest major barriers to getting people on bikes in their everyday lives.  By working with advocacy groups and officials to upgrade existing and create new infrastructure, cycling will slowly become the safer and more attractive option that On Bicycles is working towards.

With all this great content, it goes without saying that if you are new to cycling, or have been cycling for years, Amy Walker’s On Bicycles: 50 Ways the New Bike Culture can Change Your Life will give you plenty of wonderful insights, fundamental knowledge, and some reinforcement as to why cycling is changing the way people live their lives and interact with their cities.

For more information on On Bicycles: 50 Ways the New Bike Culture can Change Your Life, visit the On Bicycles blog or New World Library website.

Andrew Cuthbert is a geomatics technician working in environmental consulting. He is an urban planning enthusiast and a 365 day per year cyclist.