Yes, this is Los Angeles – the second in our series.  But where exactly?  And why is a space like this – beyond being ‘green’ – so important in the life of the city? 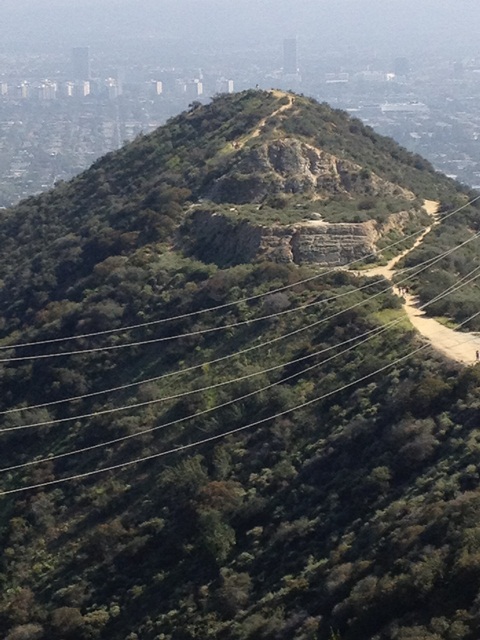 That’s a peak in Runyon Canyon Park.  (More about its very Hollywood-history here.)

Entrance to the park is just two blocks from Hollywood Boulevard (map here), and hence it’s a favoured people (and star)-watching space with some truly fabulous views: the city to the south, the homes of the Hollywood hillbillies all around. 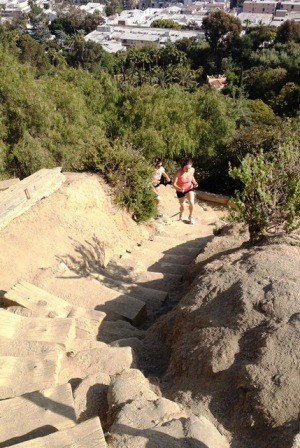 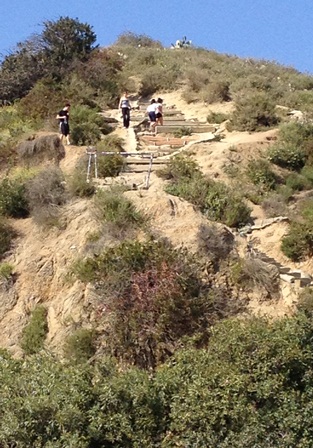 The trails can be crowded, along with the usual indicators of overuse: soil erosion, dog-people-bike conflicts, parking issues.  That’s also evidence of how few parks there are in this surprisingly dense city, and, like most urban areas, how few options there are for people to integrate ‘workouts’ into other aspects of their lives.  Los Angeles is not yet a city where active transportation is realistic, and so people have to go to places like Runyon Canyon to engage in vigorous motion on their own two feet.

Urban designers, planners and engineers need to think consciously about how to design workout spaces into the city – streets for cycling, sidewalks for running, stairs for climbing – when money is being spent on transportation infrastructure. 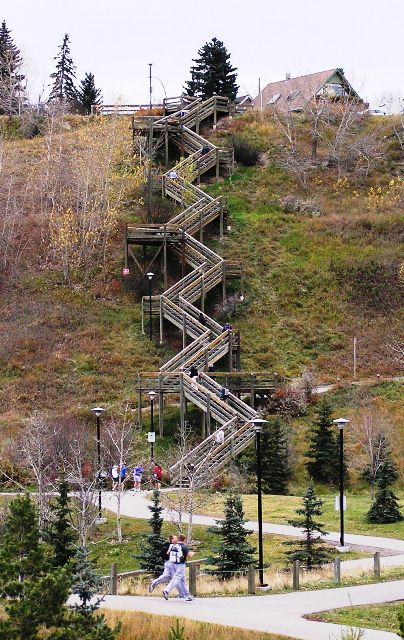 Of course there’s our seawall, which can be used for both transportation and recreation.  Indeed, the point is to completely blur the line between the two.  In our culture, leisure is not something passively experienced, biking to work is not just for environmental brownie points, taking the stairs is not just to save time.  We want to get our heart rate up, damn it.

As obesity and basic fitness demand more serious attention, as ‘walkability’ becomes an economic indicator, as living spaces get smaller, these places also become more necessary.  And our workouts get integrated into the very fabric of the city.

Gordon Price is the Director of The City Program at Simon Fraser University. He sat for six terms as City Councillor in Vancouver, BC and also served on the Boards of the Greater Vancouver Regional District (Metro) and TransLink. He publishes an electronic magazine and blog on urban issues, with a focus on Vancouver, called “Price Tags” – www.pricetags.ca as well as www.pricetags.wordpress.com. He has written several extensive essays on Vancouver and transportation issues – The Deceptive City, Local Politician’s Guide to Urban Transportation – and in 2003, he received the Plan Canada Award for Article of the Year – “Land Use and Transportation: The View from ’56” – from the Canadian Institute of Planners.
Tweet