It’s been 2 years, one month, and three days since the Bombardier Olympic Streetcar got sent back to Belgium for good. But who’s counting right? It’d be nice if the City of Vancouver could at least put up the few thousand dollars to get the Downtown Historic Railway running again this year…but that’s a story for another day.

Until now, some of us had to be content with their memories of the Olympic Line. Others like transit enthusiast Rob Chew (check out just some of his memorabilia here) go to Brussels and buy their own model version of Bombardier’s Flexity cars. 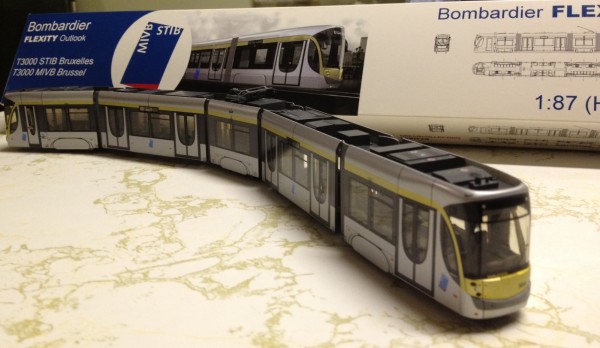 But there’s good news for all you light rail-deprived out there. To remind us of the potential that light rail has for our region, Bombardier is bringing a full-scale model of its Flexity Freedom light rail vehicle to Surrey and Vancouver. Surrey will get it first, at the Cloverdale Millennium Amphitheatre on July 1st from 10am to 6pm. Then Vancouver gets a look on Granville Island from July 6th to 8th. The model will also visit Edmonton and Calgary on its Western Canada tour.

The Flexity Freedom is the same vehicle that Bombardier is building for Metrolinx in Toronto and it is tailored for North American design standards and climate. The vehicle frame and carbody sidewalls are made of stainless steel that can handle all the salt put on roads every winter.

Having driven the Flexitys on the Olympic Line in 2010 I can vouch for their speed, handling and quiet ride. Have a look at them when they come to town and perhaps if we encourage our politicians enough we’ll see them on our streets in the not-too-distant future. 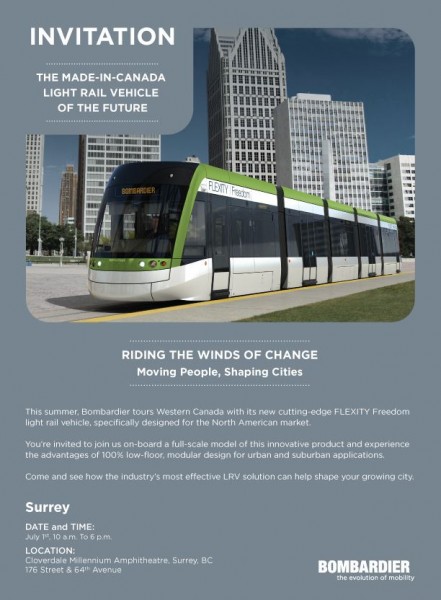