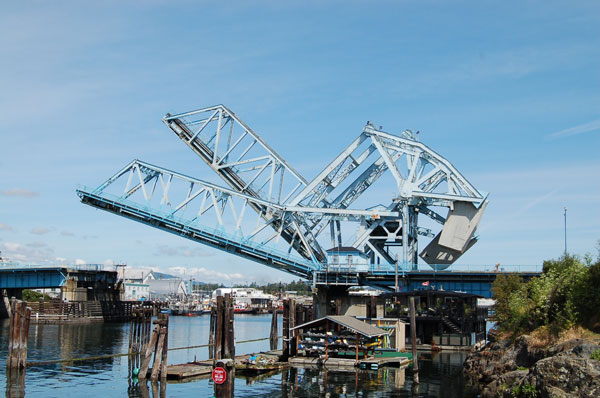 It’s always refreshing when city planners see infrastructure projects not merely as utilitarian exercises, but also as opportunities to produce works of art. Take the Millennium Line Skytrain stations, for example. Not only do they help users get from point A to point B, the project’s designers also made each station architecturally unique in order to provide a positive visual experience for Skytrain users.

But what if the effect of these projects were more than just visual?

Victoria’s infamous Johnson Street Bridge, or “blue bridge,” is widely recognized for its distinctive colour and unique shape (which is best compared to that of two oxen pulling a yoke, or, when the drawbridge is up, some sort of medieval trebuchet). But what’s perhaps more interesting about this piece of architecture is not how it looks but how it sounds.

While it was designed purely for the sake of transportation, the blue bridge nevertheless possesses an inherent musicality that is unrivaled by any other major structure the city has to offer. Listening from the pedestrian walkway, one hears the sounds of vehicles passing on a roadway transformed into a musical oeuvre that is akin to a choir of monks humming an ancient chant.

The music produced is largely thanks to the grating on the bridge’s surface, which bounces the sounds of tires passing over it in all different directions. Vehicles traveling across the bridge produce a sort of Doppler effect, and traffic noises are transformed into swelling musical notes that gently rise and fall as people move from one side of the city to the other.

The best way to hear this sound is of course in person, but in case you’re not planning on traveling to Vancouver Island in the near future, this recording gives you rough example of what it sounds like when the blue bridge sings:

With construction of a replacement bridge set to start this summer, the landmark that has connected downtown Victoria to Vic West since the 1920s will soon be gone. Building a new bridge has been a topic of lively civic discussion since a 2009 assessment identified several problems with the existing structure including extensive corrosion to steel structural beams, obsolete mechanical and electrical systems, and significant seismic vulnerability. Add to that the period two years ago when the passenger drawbridge was locked in its full upright position for several months, looking like a giant blue thumb for the whole city to see, and it’s no wonder many Victorians are ready to see the old bridge go.

On the other hand, however, some may feel that the city will lose one of its most important visual landmarks this summer, and with that, its greatest piece of sensory architecture.

Perhaps the old blue bridge will one day be seen as visionary piece of work for the way it engages passers-by with more than just visuals (even if it does so unintentionally). Contemporary architects are increasingly seeking to create pieces that appeal to more than just our sense of sight. Perhaps one day this type of design will be commonplace for urban infrastructure as well.

How about your neighbourhood? Is there an infrastructure or architecture project that grabs with for something other than visual appeal? Perhaps a fragrant living wall, or a piece of street art with a texture that you just can’t resist touching every time you walk by?  Is this something you would like to see (or hear/feel/smell/taste) more of in your city?