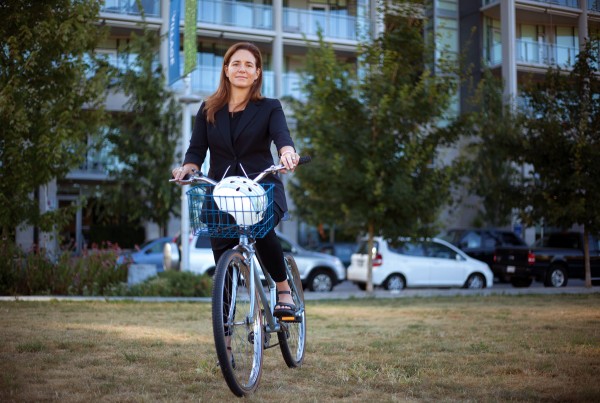 It doesn’t take long to realize that Janet Moore isn’t the type to accept the status quo. On the contrary, the assistant professor at Simon Fraser University’s Centre for Dialogue has forged a career fostering community engagement and urban sustainability — with a focus on providing opportunities for students to engage with the city outside their school’s walls.

“I think those four years of undergrad have such potential for students because they have so much energy and enthusiasm,” she says. “We don’t treat students as though they have the capability of doing something in the real world.”

That’s precisely what Moore set out to rectify with her CityStudio Vancouver project. Co-founded with Emily Carr University assistant professor Duane Elverum, CityStudio Vancouver aims to accelerate sustainability in post-secondary education and provide students with opportunities to work on Vancouver’s most challenging urban sustainability problems. That means students get course credit while also developing high-impact projects that will contribute to the City of Vancouver’s Greenest City 2020 Action Plan.

The CityStudio idea was initially presented during what Moore calls a “Vancouver Design Nerd Jam.” Then, in the fall of 2010, it was posted on the City of Vancouver’s Talk Green To Us website — a crowd-sourcing initiative in which residents propose and then vote on sustainability projects.

“The idea went from the bottom of that list to the top,” Moore says. “The next thing you know we got a call from Sadhu Johnston, the deputy city manager, and he said ‘let’s do this.’”

The program’s first projects have already demonstrated transformative power. The Orphaned Spaces Project, for example, aims to provide citizens with increased access to nature by way of improving underutilized City property, while the Parks in Streets initiative creates temporary parks designed to inspire community members to get enthusiastic about transforming public space.

Moore, 41, started out studying marine biology at McGill University in Montréal. Over the course of her studies, she ended up pursuing a Master’s degree in behavioural ecology on the west coast. Like countless others before her, the Ontario-born Moore fell in love with Canada’s westernmost province and decided to stay put upon graduating. That in turn led her to teaching first-year biology at the University of British Columbia (UBC). After earning a PhD in curriculum studies, she shifted into implementing sustainability programs at the university level. From that day onward, she’s been actively involved in a number of innovative sustainability projects in Vancouver.

“CityStudio is one of those implementations. It’s not a new idea to have interdisciplinary solutions to complex problems,” she says. “I think there are a lot of people — and a lot of my mentors in Vancouver — who believe this is the way, which is multiple institutions having collaborative conversations on how we need to move to sustainability in the City.”

That’s something Moore is particularly proud of: helping to raise awareness of Vancouver’s Greenest City goals, their interconnectedness, and the enthusiastic response she’s seen coming from participating students. “We’re getting young people engaged and they can see that they can make a difference,” she says. “Whether or not we’re moving the carbon footprint goal at this point, we’ve just gotten started and we probably will choose a goal and focus that way. But we’ve been a pilot project for nine months.”

Though CityStudio Vancouver is still relatively new, Moore is already planning her next move. “We’re now thinking about maybe focusing on zero-waste,” she says. “That hits a lot of consumption goals and a lot of things the City can actually mandate.”