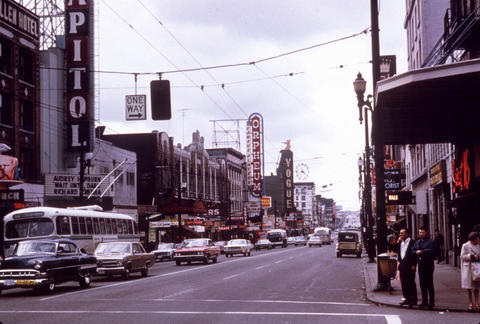 Modern Vancouver is full of the latest technology with screens and diversions everywhere we look. In a world where you can watch a new release on your phone while simultaneously texting a loved one, it’s not easy to imagine a world where a good source of entertainment was hard to come by. 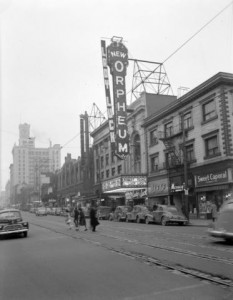 For pre-war Vancouver, movie houses filled the void of inexpensive entertainment. Between the late 1910’s and early 1950’s Vancouver saw neighbourhood single-screen movie venues pop up all over. During wartime and through the Great Depression, the local theatre allowed a bit of escape and a chance to indulge in a little make-believe. But the invention of television and the freight train of home entertainment advancements that followed have rendered the single-screen movie venue a thing of the past. 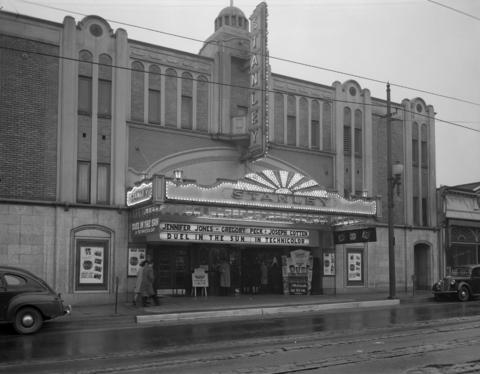 Michael Kluckner’s Vanishing Vancouver (2012) provides a lengthy list of movie venues that opened and closed in the span of 50 years. Some theatres have been converted into arts and culture venues such as The Orpheum and The Stanley. Now thriving institutions, these movie houses are now pillars in Vancouver’s culture scene, their glamourous interiors preserved for future generations. The Rio has claimed its spot on Commercial Drive with cult classic theme nights. Others have found new life as community space. The Kerrisdale has survived the decline of movies by becoming the Russian Community Hall. It received one of VHF’s Places That Matter plaques earlier this year in recognition of its cultural contributions to the Kerrisdale area. 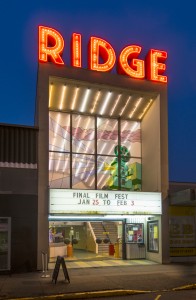 Not all have been so lucky however, and Vancouver has lost many of the venues of this iconic era. The art deco styled Ridge Theatre on Arbutus St. was recently demolished, including the huge stained glass window featuring a classic projector that was originally to be saved. There are plans to re-install the Ridge neon sign on the new build, and the memorable bowling pin from the bowling alley was recently rescued by Yosef Wosk for his outdoor art collection. The venue for VHF’s film series, The Hollywood Theatre, recently put a halt to restoration plans as a redevelopment deal was penned. The remaining neon from the marquee was removed for restoration, but is now in storage.

Other single screen venues that are no longer standing include The Strand, The Paramount, The Varsity, The Grandview, The Victoria, The Windsor, and The Beacon among many others. Some have more famous names than others, but all were part of a grand history. 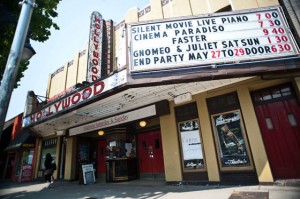 VHF would like to invite you to celebrate the glory days of single-screen movie theatres at the Hollywood on Tuesday October 22nd. We’ll be showing “The Pruitt-Igoe Myth”, a documentary film that looks at the challenges of project housing as part of VHF’s by-donation architecture and design film nights, while celebrating the 78 year history of this great neighbourhood space. Please share with us your stories and photos of old Kitsilano that include the Hollywood Theatre so that we can properly honour this long-standing venue before its use is changed. Email us or share your stories through Facebook and Twitter and then join us at The Hollywood for a classic movie night experience reminiscent of a bygone era.

To learn more about VHF’s by donation film series at the Hollywood visit our website.