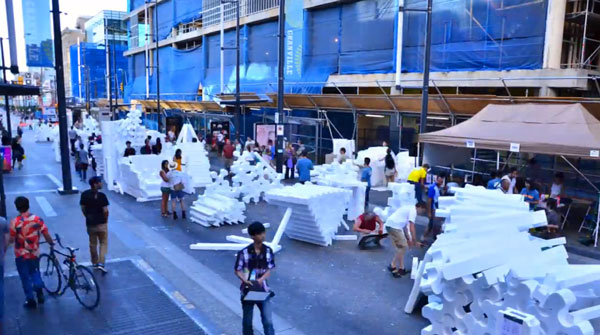 For seven months (much longer for some), volunteers from Spacing Magazine, the School of Architecture and Landscape Architecture and the Vancouver Public Space Network perfected three design concepts to reinvent Granville Street for one day in the summer, under the watchful eye of the Museum of Vancouver.

Equipped with miniature prototypes of giant recycled polystyrene, team members led multiple public design charrettes to gage the interest of the community (which was high) and to soak up ideas (which were plentiful).  Workshop attendees comprised of designers, students, skip bins services, retirees, policy makers, artists, children and engaged citizens came together to create a vision for the three designs.

With imaginations running wild, team members brainstormed ideas, poured over concepts and debated at coffee shops in order to create master plans for each design. These plans were the perfect balance of reality and whimsy, the actualization of shared ideas, a community voice put in motion. We made detailed plans for tables and chairs that would allow community members to share a meal and meet a new friend. We planned for an arena to run the length of the street providing space for giant games and seats for onlookers. We planned for a performance art piece that laid the building blocks like fallen soldiers, that would rise and be built with again; the ultimate symbol of hope.  Noble, beautiful designs inspired by our community and grounded by the City’s rigorous safety and vehicle access requirements.

Then, on that long awaited day in mid-July, team leaders supported by dozens of volunteers eagerly awaited the first participants to join our design masterpiece.  Quickly, a few onlookers became hordes of active participants. It was suddenly clear that all the planning was for nothing, completely unnecessary. The blocks were light weight, easy to assemble and plentiful.

Each participant who entered the site seemed to already have an idea in mind.  I saw a toddler lift an 8 foot long I-beam above her head as if practicing for the 2032 Olympic clean and jerk. Twenty somethings with pillow creases still on their face built a full size replica of the Flintstone’s family car, making use of thin sheets of off cuts that we had piled for recycling, thanks to the Skip Bins everything was able to get collected. Participants built caves and towers, thrones and tables, lawn chairs, pyramids, trains and bridges. For one day in mid-July, Vancouverites refused direction, ignored organized design and imagined, built and demolished as they saw fit. And it was amazing.

Anya Paskovic is an urban planner, Vancouver flâneur and world traveller interested in public spaces, urban design and community planning. By continuously questioning the relationship between people and place – places we love, we tolerate and we ignore – Anya seeks to create functional and engaging environments that reflect community values and respect the natural environment.