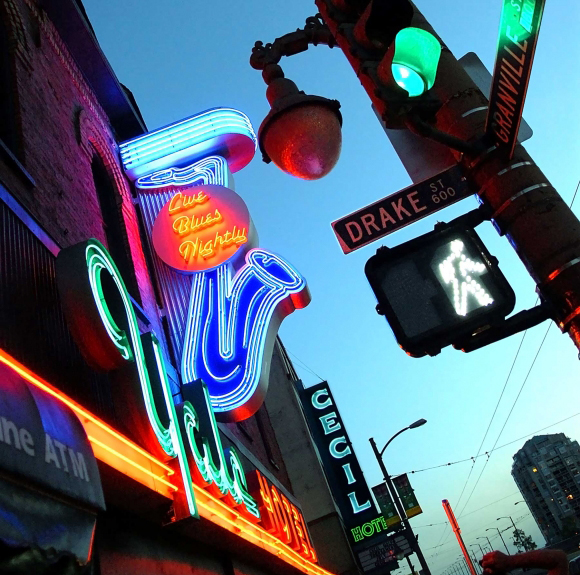 photo credit: detail from. Wendy B. via Museum of Vancouver, Visible City.

Originally named the Colonial Hotel when it opened in 1889, the iconic building at the corner of Drake and Granville has been the Yale Hotel since 1907. Designed by Noble Stonestreet Hoffar, who also did several structures including the Cordova side of the Army and Navy store, the Yale was built to house and entertain the workers at the nearby CPR rail yards. At this time there was little else in this area, as Hastings Street through Gastown was the centre of early Vancouver’s downtown. Tracking the changes in the Yale can give interesting insight into development patterns in this part of town as the Yale has a curious tie to one of Vancouver’s evolving landmark structures, the Granville Bridge. The original bridge was completed the same year the Colonial opened, the second Granville Bridge was completed only 2 years after the Colonial became the Yale, and its most recent renovation coincides with seismic upgrades taking place on the current Granville Bridge. As this part of Granville grows, the Yale continues to grow with it. 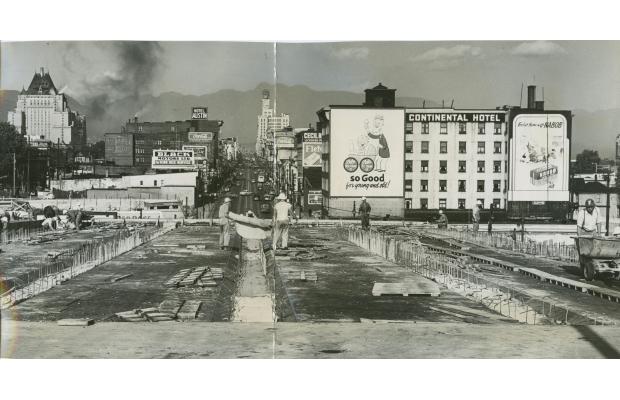 The Colonial was a three-storey wooden structure with a top-floor dedicated hotel and a basement used as stables. In fact, the most recent owners have noted that they were finding hay and horseshoes in the basement for several years after they purchased it in 1987. In 1909 a large addition was added and a brick façade wrapped around the whole building. According to Rize Alliance, who completed the recent renovations, some of the bricks were imported from Scotland as ballast, making it difficult to accurately date them, although it is clear some are older than the Yale’s 100+ years. 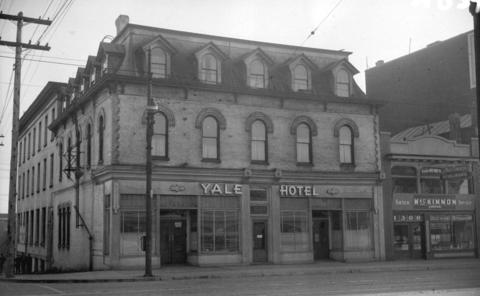 Beyond the historical significance as one of Vancouver’s earliest surviving buildings, perhaps the Yale’s greatest legacy is that of a blues venue. Some of the greatest performers in jazz and blues have graced this stage including Jeff Healey, John Hammond, and Dal Richards. Also frequently on stage was keyboard legend and Yale Hotel resident Robbie King who was known for his colourful method of critiquing the nights entertainment. King insisted on having the room above the stage and when he deemed the musicians not up to snuff he would reportedly throw on a bathrobe, storm down to the stage and take over. King also convinced the owners that if they wanted to be a proper blues venue they needed to purchase a Hammond B-3 organ, the favourite of jazz and blues organists through the 1960s and 70s, which they did. 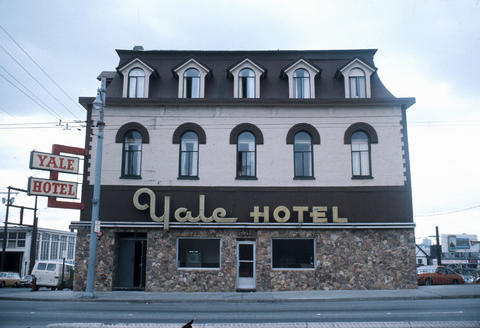 Recently the Yale Hotel has undergone extensive restorations as part of a Heritage Revitalization Agreement (HRA). A 23-storey residential tower was built adjacent to the Yale while the heritage structure was completely restored including returning the façade to its original glass storefront, performing seismic upgrades such as reinforcing the brick exterior, and restoring the upstairs hotel rooms and the neon sign. Shortly after the renovations were complete it was announced that the Yale was up for sale, and while its future use is uncertain, we can be thankful that the building itself is in top form ready for many more years of stories and legendary nights. Just perhaps with a little less hay.

Want to hear more about the restorations and the HRA that made them possible? Join VHF on March 26th at 12pm as we welcome Brent Beatson of Rize Alliance to talk about the project as part of Brown Bag Talks.