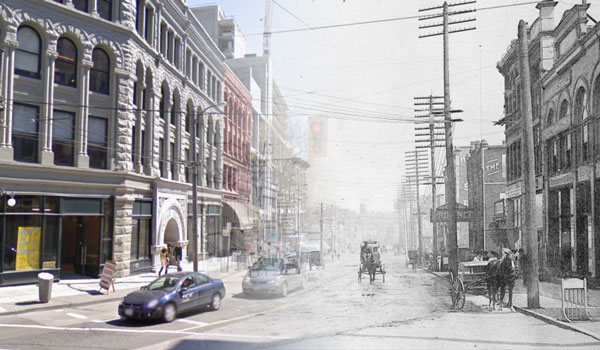 As Vancouver’s original Downtown founded in 1867, Gastown survived a period of decline and disrepair following the 1960s, today known as a tourist and commercial hub, and home to a number of the city’s most prominent high-tech businesses and start-ups.

It was steamboat captain (Gassy) Jack Deighton’s primary stomping ground, as he opened the area’s first saloon, which later became the general centre for trade and commerce. One can’t help but visualize how the area must have looked like a scene from Pirates of the Caribbean, considering Gastown was a destination for roughnecks like loggers, fishermen, crews and captains returning from their drudgery at sea.

On the Northeast corner of Cambie and Hastings, the keystone property named Flack Block (pictured below on the left hand side) commands attention to its masterful stonework. The turn-of-the century building was one of the largest and most elaborate of its time, first constructed circa 1898 by Thomas Flack, who was one of the first prospectors to strike it rich in the Klondike Gold Rush. The Gold Rush spurred a building boom in the 1890s on Hastings Street, which became the city’s premier shopping district.

The history of the Flack Block embodies the diversity of Gastown’s inhabitants, once home to a variety of businesses like barristers, mining brokers, jewellers, a jazz club and yes, even a “Turkish bath for the ladies”. This iconic establishment has dutifully been restored and preserved by the Salient Group developers, a project costing $20 million and two years to complete.

The Romanesque stonework arch and pediments initially designed by the accomplished William Blackmore (1842-1904) were meticulously recreated using old photographs. The LEED Gold Certified building offers a mix of office and retail space. The rehabilitation wouldn’t have been possible if it weren’t for the City’s Heritage Incentive Program and Federal Government’s Commercial Heritage Properties Incentive Fund.

The Gastown of today undoubtedly carries remnants of its historic past. The highly walkable neighborhood attracts tourists to its cobblestone laden streets, with boutique shops of all shapes and sizes catering to every need. The resurgence of old fashioned services like traditional barber shops, parlours, and slow drip coffee joints, all with a ‘hipster’ vibe, immortalize the era in which Gastown was born. The famous Steam Clock elicits excitement and awe from passerbys, even once appearing on the cover of the 2011 Nickelback album Here and Now (poor clock).

Real estate in the area is highly sought after. Price per square foot is less than it is in Downtown, and similar businesses tend to group within a close radius, often times only requiring you to pop over next door to meet with a contact. A neighborhood in perpetual transition, one binding element that tends to persist, is that of community.

Search homes for sale in Gastown, or read about the latest real estate developments, neighborhood, and lifestyle news by visiting the Resider Blog.