Complete Streets treat all people equally, regardless of age, gender or physical ability. Complete Street design focuses on improving the public realm and not on moving vehicular traffic. It serves as an important design tool for making our cities great places to live, work and play.

Slow Streets’ research, The Case For a Complete Street argues that Vancouver’s Commercial Drive would benefit greatly from becoming a Complete Street. In its current form, Commercial Drive’s streetscape fails to acknowledge the Drive’s role as a regional destination for culture, shopping, dining and other activities.  Instead, The Drive is treated primarily as a thoroughfare for automobiles whose size and speed create an uncomfortable walking, cycling and dwelling experience – particularly south of 1st Avenue.

Prioritizing slower modes would strengthen existing activities and allow for new uses which are only imaginable during the annual Car Free Day festival.  Re-envisioning Commercial Drive as a Complete Street would enhance its sense of place and make the street more accessible to a greater number of people. In turn, more value – and a better overall experience – would be generated for all visitors, residents and businesses.

We set out to determine who was visiting Commercial Drive, how they got there and what they were doing. This study observed the activities of over 1,000 people at three observations periods (weekday afternoon and peak evening and weekend afternoon between September and October 2014). Our main finding is that people spend most of their time on the sidewalks of Commercial Drive, including people that drive and park. 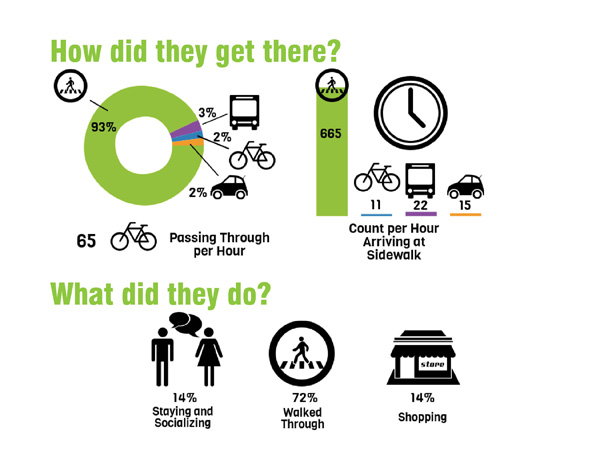 Despite the fact that there are on average 665 people walking per hour on the crowded sidewalks of Commercial Drive, only one-sixth of the street-width is dedicated for pedestrians (between 1st and Broadway). The majority of people shopping walked to the study sites and most activities observed were necessary daily activities (e.g. commuting, grocery shopping).

A small percentage (14%) stayed or socialized on the Drive potentially demonstrating that due to high vehicular traffic volumes and speeds, people may not feel comfortable staying on Commercial Drive for prolonged periods of time. When it comes to spending money at businesses, it is people on foot, not cars, that are shopping.

From this perspective, we have dedicated very little space to the main creators of wealth for businesses. By prioritizing vehicle traffic, we erode the lively atmosphere that makes Commercial Drive such an interesting place to be. 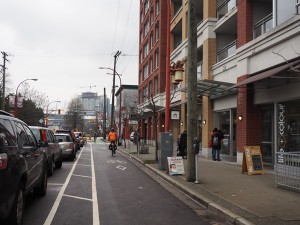 For comparative purposes, Slow Streets observed Union Street which features a similar mix of commercial and residential uses. Union Street, with its vehicle buffered cycling lane, demonstrates that it’s possible to increase the capacity to move more people in the same amount of space while maintaining access for all modes. Consequently, Union Street has four times more cycling traffic and one-fifth less vehicular traffic, but the proportion of shopping is similar to Commercial Drive.

We also surveyed the Union Street business community to assess the impact of the separated bike lane and found that the majority of businesses had positive perceptions. The businesses stated that the increased number of cyclists was generally good for Union Street and their bottom line. Most businesses also had a caveat that they would not have been as supportive if the cycling lane had eliminated all of the vehicular parking.

Parking is certainly important for providing delivery and customer access to businesses. However, concerns around losing parking spaces on Commercial Drive are unwarranted. Slow Streets conducted a parking inventory and discovered that there are over 700 public parking stalls surrounding Commercial Drive, between Grandview Highway and 1st Avenue. Our parking analysis of Commercial Drive indicates that there is an abundance of parking, where 87% of parking available for the public is provided for free on the side streets off of Commercial Drive. This preliminary analysis shows that due to parking restrictions already existing on Commercial Drive (such as turning allowances at intersections and bus stops), replacing two vehicular traveling lanes with dedicated protected cycling lanes and widened sidewalks would have no net loss of parking. 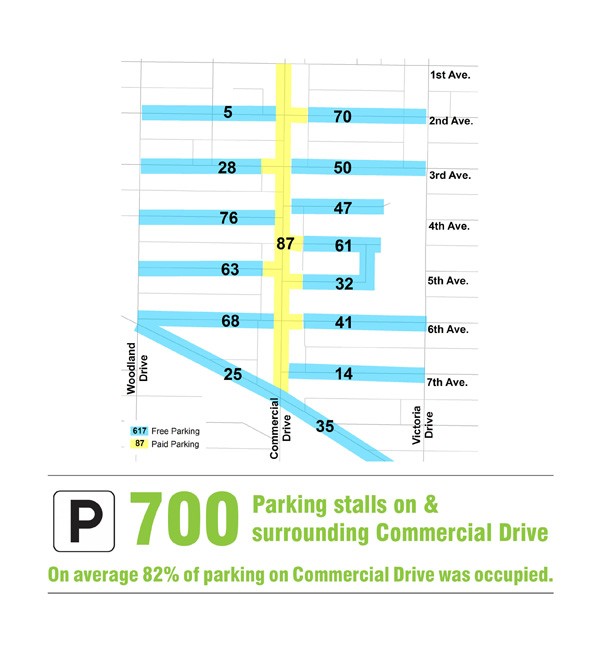 Despite the lack of dedicated and safe cycling infrastructure on Commercial Drive the number of people cycling through is considerably high at 65 people per hour on average. That a considerable number of people are willing to cycle with traffic on Commercial Drive without protected cycling infrastructure indicates that there is latent demand potential. Providing safe, and dedicated traffic separated cycling lanes would support dramatic cycling growth as witnessed by all other separated cycling lanes in Vancouver.

Looking to the future, a Complete Street on Commercial Drive will help Vancouver achieve many of its future sustainability goals and objectives:

Perhaps most importantly, a Complete Street on Commercial Drive could set a precedent for other retail streets in Vancouver like Main Street, Davie Street, Kingsway and Fraser. These streets are also some of Vancouver’s most important destinations which lack critical infrastructure to support active transportation.

The Case For a Complete Street details primary research conducted by Slow Streets between September 2014 and January 2015 including pedestrian observations, business surveys and an inventory of parking. Slow Streets also conducted a literature review of Complete Streets best practices and the impacts on neighbourhoods and businesses in other cities. The report can be downloaded from slowstreets.ca or via Dropbox.

Slow Streets is a multidisciplinary research group providing evidence for street design changes that connect with broader socioeconomic outcomes. Slow Streets is based out of Vancouver, Canada.