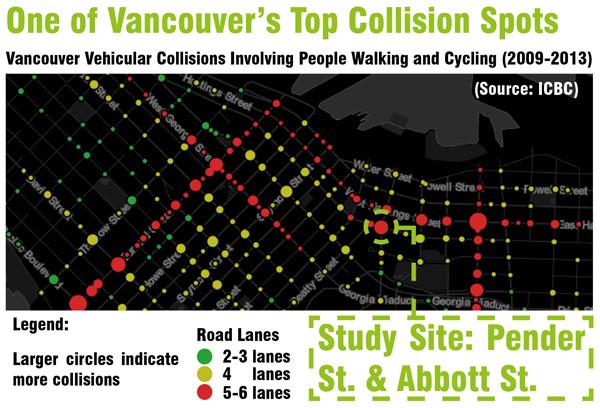 According to ICBC data between 2009 and 2013, almost 4,000 people across Vancouver were struck by vehicles while walking or cycling. How is it that such a high volume of injuries and casualties are acceptable as a necessary “by-product” of our business-as-usual mobility system? What is the main cause of these collisions?

Preliminary Slow Streets research mapped the ICBC collision data, finding that higher volumes of collisions were correlated with wider streets. However, this data only tells us that a street or intersection is dangerous – it doesn’t explain what specifically makes it dangerous for people walking and cycling.  Slow Streets set out to find out why the intersection at Pender St. and Abbott St. is one of Vancouver’s most dangerous intersections for people walking and cycling.

Slow Streets used video footage to capture the activities and directional volumes of all modes entering and leaving the intersection. In total, we observed over 3,500 people walking and cycling and counted 1,454 vehicles. The counts were conducted during weekday middays, weekday peak hours and weekend midday to obtain a snapshot of the intersection’s activity at various times.

On average, there are over 4,800 people per hour moving through this intersection. Of that, 75% of people entering the intersection were walking, cycling or using transit. On average, there are 187 people cycling per hour. However, Slow Streets observed up to 286 people cycling per hour through the intersection. These levels of cycling are comparable to the volumes we observed on nearby Union Street, one of Vancouver’s busiest cycling neighbourhood boulevards. 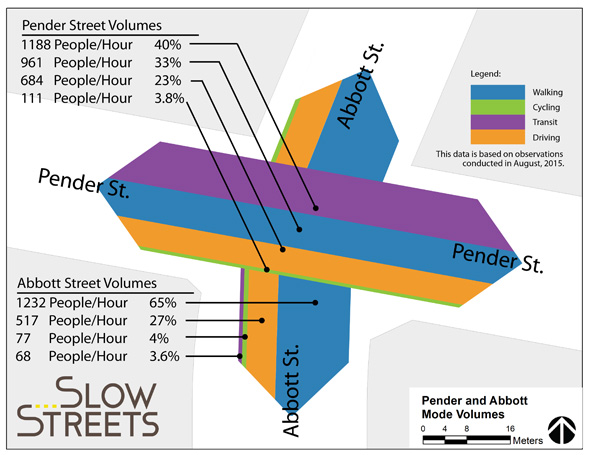 After analyzing the walking speeds of people, Slow Streets astonishingly found that only 16% of people can safely cross Pender Street in the minimum legal crossing time. We discovered the main reasons for this were the wide crossing distances (17 meters) and short traffic light timing (13 seconds, from when the orange hand starts flashing). This is typical of most streets in Vancouver and across North America. At 5 lanes (4 travel lanes and 1 left hand turning lane), the street is 17 meters wide. This particular geometry is designed to prioritize moving vehicles through quickly.

Due to an automobile focused intersection design, the traffic light timing primarily only accounts for vehicular traffic volumes. Since Abbott Street has significantly less vehicular capacity than Pender Street, it therefore receives a shorter traffic light signalization. This creates a dangerous environment for people walking. People on foot have at most 20 seconds and at least 13 seconds to cross the 17 meter wide Pender Street. 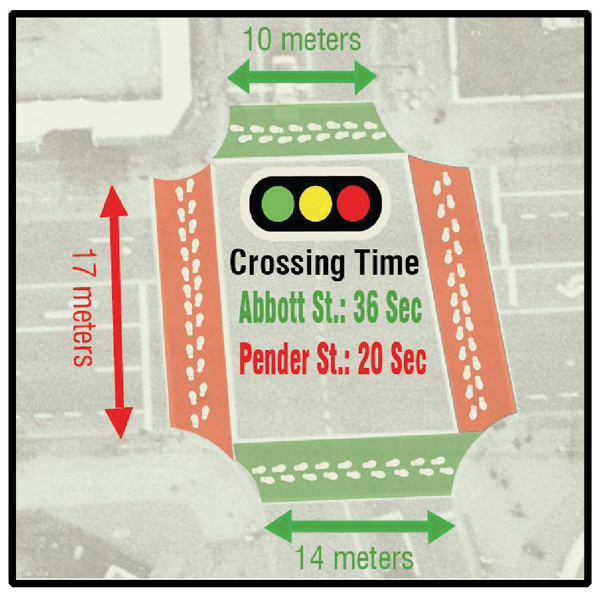 While changing the traffic light signalization can help, the central issue is the long crossing distance exposing people walking and cycling to vehicular traffic longer. Wide streets are dangerous for people walking – one study found that every additional 1 meter of crossing distance results in 3% more collisions. As one cost effective solution, Slow Streets recommends removing the left hand turning lane on Pender Street. The left hand turning lane accounts for 17% of road space, adding 3 meters of crossing distance for people walking. Meanwhile, only one-third of the existing vehicular road capacity is being used on Pender St.’s other lanes. Reallocating the 3-meter left-turning lanes into 1.5 meter floating medians on both sides of Pender Street will increase the number of people who can successfully cross Pender over the minimum legal traffic light timing from 16% to 50%. These changes will not only enhance safety for walking—by reducing the time mixing with vehicular traffic—but will also protect people cycling. Skinnier road right-of-ways also help slow down vehicular traffic, which further reinforces a safer environment for walking and cycling. 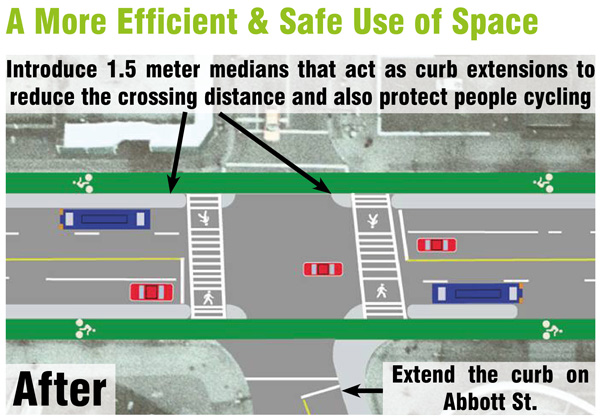 In North American cities, streets and traffic lights are designed to prioritize the automobile movement through quickly. This comes at the expense of everyone’s safety (drivers included!). Many of our streets are over-built with extra vehicular capacity and there is plenty of opportunity to reallocate space so that they are safer for everyone. The overall result is a safer travel environment for everyone, while simultaneously preserving sufficient vehicular road capacity. To read the full report visit www.SlowStreets.ca.

Slow Streets is a Vancouver-based Urban Design and Planning consisting of Darren Proulx and Samuel Baron that provides original evidence for people-oriented streets. We believe streets serve many uses beyond moving automobiles quickly.