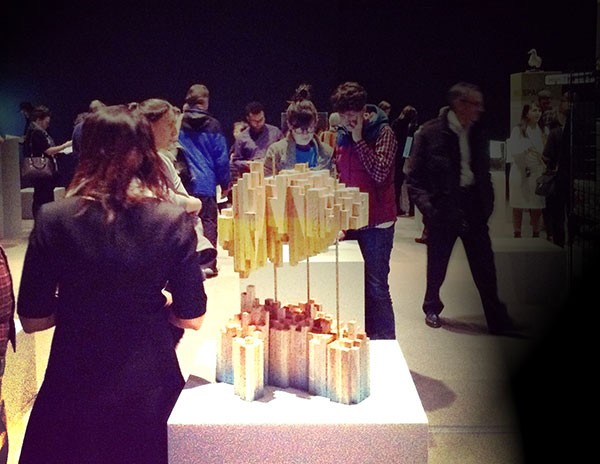 Following last week’s Vancouver Debates #1 kick off event at the Museum of Vancouver, visitors where invited to the launch of the Your Future Home: Creating The New Vancouver exhibition, where over 20 architecture and design firms along with planners express their vision on how their future Vancouver should look like in order to be more affordable, accessible and inclusive city.

The 24 exhibits consist of information graphics, multimedia screens, mock ups of the downtown peninsula, architectural models, interactive show cabinets and panoramic images that invite and inform the viewer on future scenarios of Vancouver.

Accompanying these futuristic visions, 8 didactic displays showcase the defining moments in Vancouver’s history, such as the Great Freeway Debate that resulted in Vancouver being a Freeway-free city in North America as well as the creation of the well-known West End Mole Hill development, an affordable housing project run by the Mole Hill Community Housing Society, that is also the last intact block of heritage houses in downtown Vancouver.

The goal of Your Future Home: Creating The New Vancouver is to rediscover the city from a critical perspective, to take action and get involved in shaping the city’s future. As such, the exhibition is highly engaging and invites the audience to participate. The Urbanarium Smartmap allows everyone to share their perspective on Vancouver’s places and spaces in terms of ‘smart’ or ‘not so smart’. For example, on the map, someone dropped a crossed out pin at the section MacDonald and Point Grey, asking, “Is it really possible that one private driveway can assume such a prominent place in our public realm? Who let that happen?” Many people can relate to questions like this and many more. Anyone can share their findings on the Smartmap.