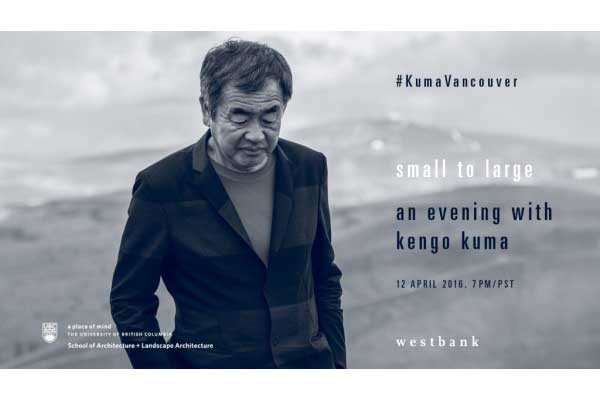 As the third in the Gesamtkunstwerk lecture series produced by Westbank, and with the support of the UBC School of Architecture and Landscape Architecture, Japanese starchitect Kengo Kuma spoke this past week to a capacity crowd at the Chan Centre. Michael Green opened the evening, welcoming those who had ventured out to Point Grey on such a rainy night, and before introducing the new director of SALA, recalled taking his eight year old son to one of Kuma-san’s museums seven years ago, and the revelatory experience it proved to be for both of them.

Director Ron Kellett followed, thanking those present on behalf of SALA, and shared Michael’s sentiments, pointing out that the 1400 plus group of architects, students, academics, and more were in for a real treat. The format of the evening was such that Kengo would speak in the first half of the evening about his smaller more intimately scaled projects, and in the second half about his larger cultural and institutional projects. Each would be followed by a brief panel discussion, the first featuring Michael Green and James Cheng, the second composed of Bing Thom and George Wagner.

He then introduced Westbank CEO Ian Gillespie, who would be the one to introduce the great architect everyone had come to see and hear. Ian shared with us that he has known Kengo for some time now, with the first time being to design a resort entry in Oahu, Hawaii and now with the new tower in Vancouver, totaling four projects they have worked on together. He pointed out that as Kuma’s architecture is both expressive of beauty and equity, he feels Metro Vancouver could greatly benefit from the exchange of these traits through his architecture.

Without any further ado, Kengo took the stage and began by discussing the importance of materials and detailing in his work. He began with wood and how, as a material, it influenced him from an early age, complete with memories of its lightness, warmth, and aroma. His wood pavilions, starting with one built with his students in Italy, are explorations in the material’s tradition of Japanese joinery – a tradition he has expanded to realize larger structures, including a fit out of a Starbucks in Japan, as well as a three-storey house.

This exploration’s ultimate culmination is his poetic Prostho Museum Research Centre in the Aichi Prefecture in Japan, based on the Chidori system of wood blocks and joints, and a traditional wooden Japanese toy. By layering simple, repetitive wood elements, Kengo takes small, discrete details in wood and envelopes his spaces with them, creating an architecture that challenges our conventional sense of space.

Other material explorations he shared with us included creating small structures with modules of stone and aluminum plate, again complete with elaborate joinery systems. Kengo also explored the limitations of ceramic tile, using it in thicknesses where the material could be load bearing and self supporting, allowing the tiles to become transformed into sculptural wall systems. Another investigation into the potential of clear plastic storage tanks yielded a house in which the walls and roof were of the same material as the kitchen table and bed.

As an exercise to look at creating shelter quickly in a post-disaster environment—and as this is being written Japan is dealing with a series of devastating earthquakes—the exigency to create shelter out of materials close at hand led to the exploration of shelters built out of umbrellas, with a demonstration by a group of his students camped overnight in one of the light tent-like shelters. The last pavilion he shared with us was his most ethereal, constructed entirely out of sticks of incense.

In the second half of his presentation, Kengo began with a brief presentation of one of his inspirations, the wood block painter Utagawa Hiroshige, and how this age old tradition of painting has had a tremendous impact on his architecture practice, especially in the use of layering. He quickly demonstrated this by showing us Hiroshige’s Sudden Shower Over Shi-Ohashi Bridge and Atake (1857), the individual layers that compose the painting—first the clouds and rain, next the bridge, then the water, and lastly the trees on the shore in the background—and how this layering created a depth of space in a way that is fundamentally different than the Western artistic tradition of using perspective.

With this in mind, we were all able to more fully appreciate the rich layering of Kuma’s architecture. And with this as a point of departure, the audience was given a whirlwind tour of close to a dozen of his projects, starting with one of his most well-known—and the one Michael Green may have been alluding to in his introductory story—the Bato Hiroshige Museum of Art in Natagawa. This was followed by a presentation of several of his more recent projects, including a new city hall precinct and stacked residential ‘tower’ in Japan, a new cultural centre built on a post-industrial site in Paris, a transportation hub in St. Denis, a new opera house in Spain and a resort in Hawaii.

The second last project presented was the controversial stadium for the 2020 Tokyo Olympic games, a project which had been originally awarded to the late Zaha Hadid. While Kengo gave a brief presentation of the new stadium and its intent to be one of the most green to date, it was the evening’s final project which had most of us transfixed, and the project which had prompted Ian Gillespie and Westbank to invite the architect to Vancouver.

With several of the study models on display outside the main hall at the Chan, those gathered were able to get a good sense of this new tower soon to take shape on Alberni Street. In Bing Thom’s segment of the panel discussion, he pointed out that Kengo had hit the nail on the head showing a cloudy Vancouver sky in the background of his renderings of the project. With its characteristic ‘scoop’ on its most prominent elevation, it will be a much needed departure from the business-as-usual towers that have characterized the Metro skyline as of late. How it proves to be equitable, however, will remain to be seen.

To see the video stream of the event, go here.