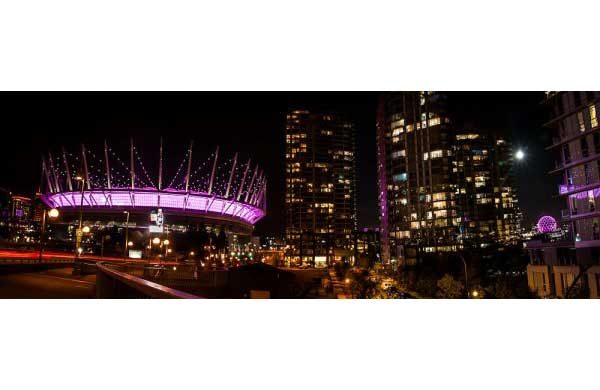 [Editor’s Note: As we, at Spacing Vancouver, have discussed in the past, having intelligent urban lighting can transform a city. We are republishing this piece, written by Scot Hein and originally published in Price Tags, towards continuing the conversation about the importance of having an urban lighting strategy.]

Let’s reflect on the Southeast False Creek Energy (SEFC) Centre.  Initially, the site for this new civic utility was to be located in the “Sawtooth Building” which is located on the site of the former city works yard east of the Cambie Bridge.

During initial design exploration for this location, city staff, along with Bruce Haden of Dialog, became interested in the use of lighting effects to tell the “story of energy.” The Light Columns at the entry to Los Angeles LAX airport were seen as an interesting visual reference for what could be a public-art-like feature.  As pre-design explorations continued, it became desirable to locate the new utility building under the south Cambie Bridgehead as this was “free land,” and more importantly, this siting would not encumber future utility corridor locations for the Worksyard Neighbourhood, which would be the last to develop in Southeast False Creek.

Also at this time, the City began to organize the ownership model, with the City itself being both a utility owner and development permit applicant.  Planning staff insisted that the new building (approximately a third would be seen above grade) be as good as any building we might demand of the private sector.  This meant hiring a skilled architect and public artist to execute the design with interest, especially as a “teachable moment about district energy.”

The City, to its credit, engaged architect Walter Francl along with Stephanie Robb for these respective roles.  As the design process unfolded, it became evident that the building had an important urban design role to play in announcing its location as the intersection of the Cambie Promenade (from Cambie Village to False Creek), with the east-west pedestrian route between the existing community to the west along Spyglass and the future Worksyard Neighbourhood to be implemented as the last phase of SEFC.

The ultimate siting, and shaping of the building became the early focus of the design process with Walter/Stephanie offering the thoughtful triangular shape to creatively reconcile these urban design considerations.  As various energy sources, including bio-mass, were being considered it became evident that the building must “do more”, perhaps as a teachable moment in the urban landscape.  A decision was taken to use sewer heat recovery, in lieu of bio-mass, given the immediate proximity to large trunk lines that facilitated the flow of warm raw sewage.  The “Confluence of Effluence.” 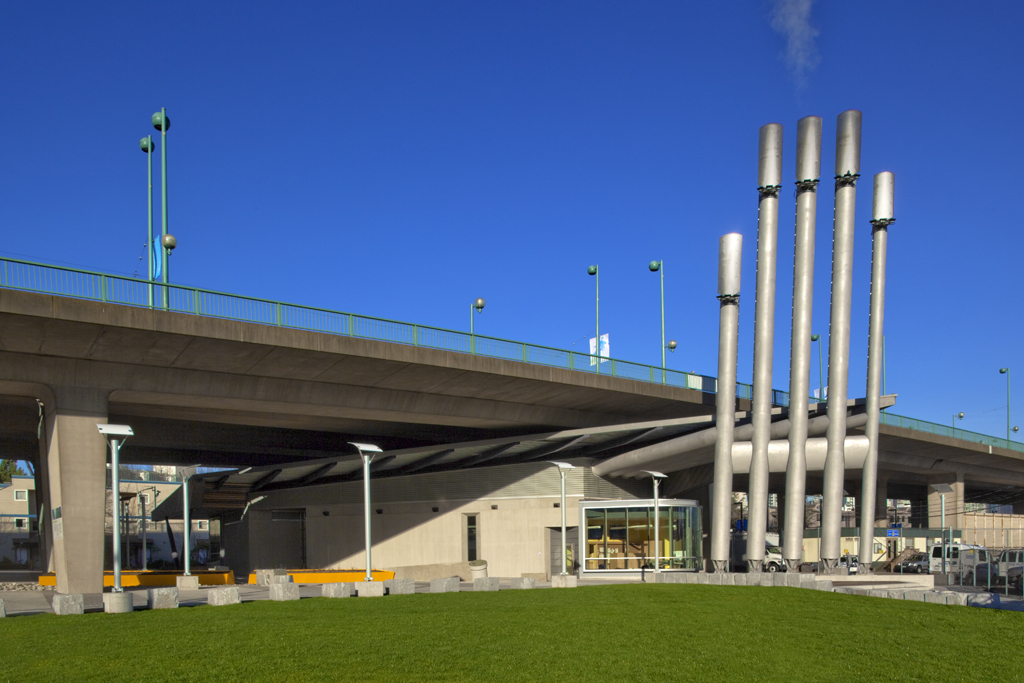 As the technical work advanced, it also became necessary to introduce immediate and future boiler capacity that would emit clean steam as a strategy to augment sewer heat should this be necessary in colder times.  The boilers would need vent stacks to discharge clean steam when called upon.  This requirement generated the wonderful result of what some refer to as “the fingernails” or the five one-meter- X three-meter-high LED panels that are clipped on to the top of each stack that rises above the south Cambie bridgehead on the east side.

Stephanie was brought on board to execute this feature.  Her early thinking generated what she referred to as the “nail polish chart” which reflected a variety of features and effects for breakfast, dinner and afterwards, at different times of the year.  We were clearly having too much fun in those early days of the design process. 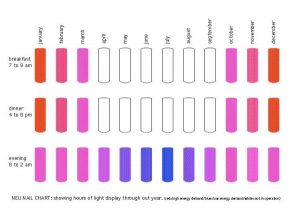 Also at this time, we began to test mock-ups for the “fingernails” at different scales and under various conditions.  This concluded with a mock-up in the field.  I recall commenting to both Walter and Stephanie that summer evening that we are missing the mirrored disco ball and a funky background soundtrack (read George Clinton and Parliament or Barry White).

The project was constructed on time and was awarded the AIBC Lieutenant-Governor of BC Gold Medal for Architecture in 2010.  This is the highest honour that our professional association recognizes. As a side note,  I understand that there were no cold showers (over 10,000 taken) during the 2010 Olympic and Paralympic Games.

This is where the story begins. 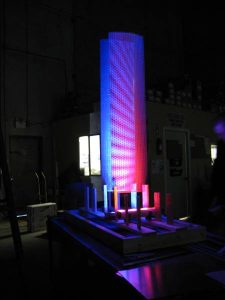 The LED panels were energized at occupancy with their colour and effects reflective of the real time consumptive habits for those on the system.  The fingernails were our “Scarlet Letter” for all Cambie Bridge motorists and pedestrians to see just how responsible, or not, those on the system were behaving.  Overly consumptive – the panels trended to red.  Dialed down – the panels trended to blue.  This continues to be the default mode for the system.

During design, we also discussed the possibility of taking the panels off-line in favor of a more specific colour/effect.  We always knew we could dial in orange for Halloween; red for Valentine’s and Canada Day.  On a whim, and with the assistance from project engineer Chris Baber, I e-mailed Gary Killacky who was one of the operating engineers on site along with Kieran McConnell.   I asked him if he would not mind dialing up the five panels to “pink” to announce “Breast Cancer Run for the Cure” which was to occur that weekend.  I wanted to attempt this programming change as my sister Melinda was recovering from her own challenges with breast cancer.  This would be my little secret.

Gary’s initial response was “What?”  “Really?”  And then a small miracle: Gary within about 10 minutes e-mailed me back to confirm that he had gone to the Run for the Cure Website, found the pink colour, had matched it to the Pantone Colour Website, and had made a matching lighting colour selection.  The panels would be pink from Friday through Sunday.  (I am forever indebted to Gary and Chris for this kind act.  We continue to have wonderfully creative, thoughtful engineers at Vancouver City Hall.)

But this is where the story gets more interesting. 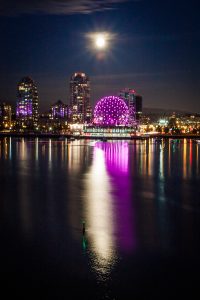 After a couple of years it occurred to me that we should not stop there.  So I cold called Duncan Blomfield who was BC Place’s Manager for Marketing and Communications, and could influence the lighting programming of the prismatic transom that surrounds the entire stadium under the retractable roof, and simply asked him to match the Pantone colour as with the SEFC Energy Centre for that year’s Run for the Cure Weekend.  Duncan said, without hesitation or needing to run this up the flag pole, yes.

With BC Place also pretty in pink, I phoned my friend at Science World, the wonderfully creative Kevin Kearns, along with Mila Cotic, who agreed immediately to do the same.  Now with three significant, waterfront buildings glowing pink, we only needed to add the Olympic Plaza “Ship Ribs” to complete the ensemble.  I phoned Otto Kaufman in Engineering, who did so much heavy lifting behind the scenes on the OV file,  and he also agreed.  So for two years we were able to enjoy what we, in the City’s Urban Design Studio, would call “Pink False Creek.” 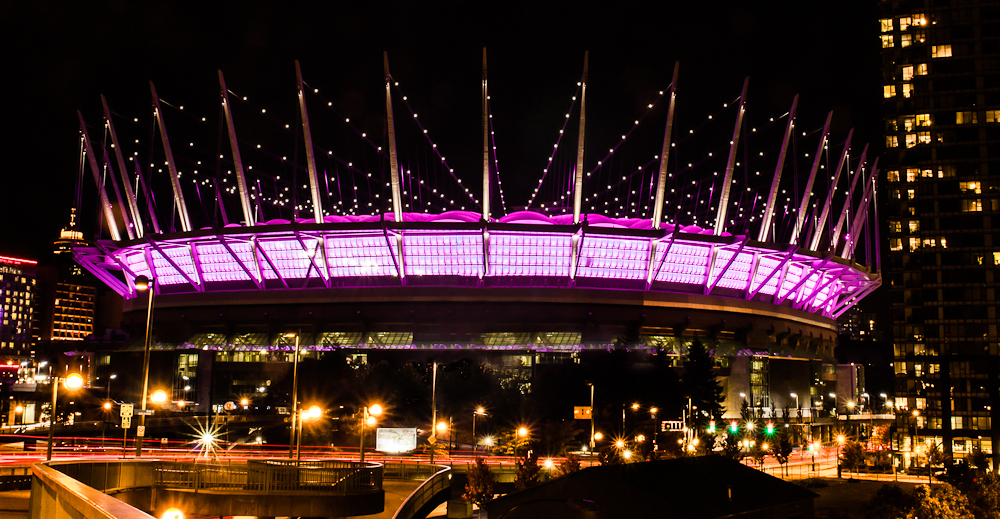 I share this story at Gordon Price’s insistence.  It remains relevant towards a larger conversation about the value of an “Urban Lighting strategy” given our lack of seasonal light, and commanding reflective position on our waterfront.  Perhaps this will generate a discussion back at the hall.

Scot Hein is the University of British Columbia’s Urban Designer.  Prior to this work he was the Senior Urban Designer for the City of Vancouver and led the city’s high profile Urban Design Studio for 10 years of his 20 year career.  His work included the urban design and implementation of new plans for the city’s West End, Downtown East Side, Cambie Corridor and Mount Pleasant.