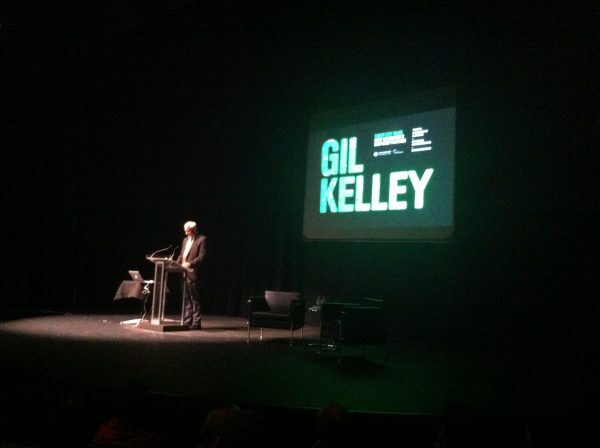 Presented by Urbanarium on September 28th, new City of Vancouver Director of Planning Gil Kelley spoke to a full house of architects and planners at the Vancouver Playhouse. Introduced by Vancouver architect Bruce Haden, everyone in the room was anxious to hear from the new city planner, who has made a recent move from his position in the San Francisco transportation & planning department, and now has the challenging task of putting the Vancouver development community back together.

For gone are the halcyon brown-field days around False Creek and Coal Harbour that were the legacy of Ray Spaxman and Larry Beasley, with Brian Jackson and Brent Toderian having more recently had to face a civic populous turned against the development industry for putting the profit of land-lift over the needs of the city’s healthy housing stock. It was no surprise then to hear Gil speak immediately about the ‘missing middle’—the lack of infill townhouses, duplexes and triplexes in the city’s housing stock, something he has also seen in San Francisco, Seattle, and Portland while he was working in those planning departments, and now also here in Metro Vancouver.

Bruce introduced Gil by first speaking about how he, himself, has recently witnessed an increased polarization in Metro Vancouver’s constituents over the business-as-usual densification of the region’s developers. It has of course been the subject of much local deliberation, including the debates recently put on by Urbanarium, and Bruce spoke of seeing firsthand this disintegration of civic relations. That people are now fighting over preserving parking garages, instead of building much-needed affording housing, seems to represent the insanity of our present situation. And this, of course, is what Gil is now going to face in Vancouver.

This coarsening of the public conversation, Bruce explained, is why the Urbanarium has recreated themselves now, especially as Vancouver residents have recently voiced their distrust of the development community in projects in Mount Pleasant, Grandview-Woodlands, and Little Mountain. With large developments now poised around Oakridge Mall, the Viaducts, and the Broadway corridor with the Skytrain extension west, the City of Vancouver is at a pivotal moment where the decisions made by the planning department could either simply continue the current course of meh policies, or take a great leap forward by engaging in the conversation around urban densification, transportation, renewable energy, and public health. This is a discussion about Smart Cities, and Gil’s message in his talk was that he is ready to take Vancouver in this direction.

With his talk entitled West Coast Cities: On the Leading Edge of Change, Gil strongly believes that the cities along Pacific Northwest – San Francisco, Portland, Seattle and Vancouver – have much to learn from each other. All he believes share a similar socio-environmental ethos, one that embraces a densification strategy grounded in new renewable energies while subject geographically to the same seismically active subductive zone. For this reason, Gil is espousing a shared planning philosophy between them, one with strong housing policies.

Each city, he feels, could learn much from its neighbor, like how to push the envelope on infrastructure and street design, along with implementing seismic retrofitting, which is often left by the wayside. This final piece, Gil feels, is most lacking here in Metro Vancouver, and disaster preparedness will be a big part of his policy reboot. The humanness of the city is important to him too, especially in light of the affordability crisis, and he sees the need for a paradigm shift in all four cities, especially in regards to their housing policies.

He pointed out though that this policy reboot must not involve throwing out all the neighbourhood OCP’s in Vancouver, but at the same time people are going to have to accept that densification is here to stay. He sees affordable housing, growing economic inequality, and public health as the big three challenges for his planning department. Given the breadth of these challenges, he sees the need for a larger City Vision more now than ever, a city-wide plan which will require input and engagement with the leadership in each community neighbourhood. To this he added that City staff has been through a rough few years, in which time they have leaned heavily on civic policy without much of the innovation that has been their hallmark in the past.

He said now is a good time to stand back and look at the big picture. As a newcomer to Vancouver, he sees an environment where development and real estate is running roughshod over the processes of community engagement. For this reason, he believes it is time to stop and regroup. He also notes that leadership in the City has suffered, its role diminished since the days of Spaxman and Beasley.

Lastly, he spoke of a generational divide that didn’t exist a decade ago, emphasizing that now, more than ever, city planners must be cognizant of this. Where millenials are going to live is a big concern, as well as the fact that people are growing more informed as to what community amenity contributions are, and keenly aware if they are not being implemented properly. Furthermore, Gil also sees the need to continue to up the city’s architectural ante, with some recent entries by Bjarke Ingels, Kengo Kuma, and Shigeru Ban doing a lot to raise the bar. However, he still sees much of the same tired pedestrian development that has caused our current malaise, far from the idealism that spurred the creation of the Vancouverism brand.

In his two weeks as new head of the Department of Planning, Urban Design, and Sustainability, Gil says he has seen a housing reset taking place, something he sees as very important and timely. He also related his first experience of walking to the end of Granville Street, expecting to see the harbor, and disappointed to find a parkade blocking the view. “We can do better than this,” he stated bluntly, prompting applause from the audience. He also briefly touched upon the importance of the Broadway Skytrain extension, much needed in order to provide for the 70,000 students that commute to UBC each day. And finally, he spoke of looking forward to working with local First Nations, in particular on the Jericho Lands.

Overall, Gil stated how he sees Vancouver as being a leader in its development of arterials and transit-oriented developments (though he noted the Millennium Skytrain corridor has not yet filled out), but that the city scores poorly in regards to its infill housing. Integrating a successful program to prompt the growth of this sector will then be key to his vision, along with implementing sustainable strategies for a renewable city vision dovetailed with a robust program of disaster-preparedness. And finally, he stated bluntly that we need to do engagement better, which can be facilitated by a whole new suite of communication techniques, something he sees as imperative to rebuilding the public trust.

He concluded his talk by thanking everyone in the room, as well to his fellow managers at the City for giving him the opportunity to come to Vancouver. Bruce then returned to the stage to host a short Q & A forum before opening up the evening to the floor for questions. His first question to Gil was about some of the initial challenges he sees in his role, to which Gil humourously responded about learning ‘Canadianisms’ such as postal codes and the like—something he believes will require listening more closely to his northern counterparts. Bruce then asked matter-of-factly “Why Vancouver?” to which Gil spoke again about the shared DNA with the city’s he worked for south of the border.

Bruce would’ve been remiss had he not asked a question to the new chief planner about the relationship he saw between planning and architecture, to which Gil spoke about how both are right brain activities, requiring an engagement with the imagination to solve concrete problems. Bruce then took a half dozen questions from the floor, with topics ranging from the emergence of an Airbnb culture, Uber and autonomous vehicles, and working with other municipalities in the region. Michael Geller, as it happened, would ask the final question of the evening, which was about zoning capacity and amending it to accommodate the elusive missing middle housing stock.

And finally, to close the evening, Urbanarium founding member Richard Henriquez took the stage to thank Gil, and expressed what most of us were thinking—that we look forward to seeing how Gil’s vision will begin to affect our built environment in the not too distant future.