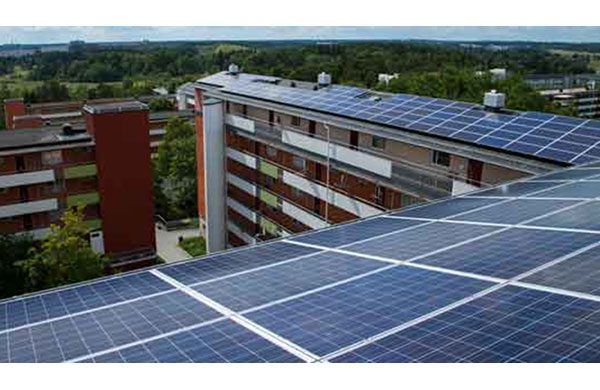 Jarva, Stockholm. Image Courtesy of the City of Stockholm.

In Stockholm, planners ponder how to ensure that deep energy retrofits take root in the diverse suburb of Järva, a district with unique socioeconomic challenges. Tucked between the French border and the Black Forest, the city of Freiburg is home to the Vauban neighbourhood, whose design and governance has been citizen-led from the beginning. The City of Vancouver, taking its first footsteps towards being powered by 100% renewable energy, asks “how?” and “how fast?”

In each of these cases, Stockholm, Freiburg, and Vancouver have looked at engagement in different ways—both to help solve their energy problems, and to help make life better for residents. All three cities are home to ambitious targets: Stockholm, fossil fuel free by 2040; Freiburg, climate neutral before 2050; Vancouver, 100% renewable energy by 2050. Despite these high-level mandates, the success of implementation, informed planning, and political resiliency depends heavily on words. Here is how these three cities have used participatory processes to do better energy planning.

Like many who live in national housing projects common throughout Europe, the residents of Stockholm’s Järva suburb have contended with the poor health and environmental consequences of porous and draughty public housing built throughout the 1960s and 70s. With unemployment rates as high as 30%, Järva’s more than 50,000 residents, mostly newcomers to Sweden, also bear some of the social problems associated with poor urban design.

As a component of Vision Järva 2030, approved by Stockholm’s city council in 2009, parts of the suburb have been undergoing a five-year revitalization pilot program called Sustainable Järva, which is designed to cut energy use in the decades-old apartment flats by 50% through retrofits.

But, instead of following in the footsteps of many problematic urban regeneration projects that include imposed planning decisions and technologies incompatible with the preferences and lifestyles of residents, Stockholm opted for a different route: Järva Dialogue.

Through the Järva Dialogue program, the City and its partners have hosted over 10,000 residents in a series of meetings and solicited 30,000 comments to shape Sustainable Järva’s design phase. Before renovations began, household members were also able to meet and collaborate with architects and building managers to ensure all parties were on the same page. All too often, new building technologies fail to live up to their promises when residents aren’t on board. Sustainable Järva’s solution was to promote behaviour change through education, and train ambassadors to inform residents about how to save energy. The result? An ongoing commitment, an increase in resident satisfaction demonstrated through surveys, and perhaps most importantly, a sense of ownership and pride in the renovated flats’ sustainability features.

With the Cold War’s cessation, the pullout of French troops from from the German city of Freiburg’s “Quartier Vauban” in 1992 opened up new opportunities for a radically new kind of development. One whose citizen-directed design process, urban form, and energy characteristics are unlike those of any other.

A walk through Vauban, which is really a suburb nestled in between the edge of Freiburg and the rolling hills of the surrounding countryside, paints a picture of what cities can be: Seven car-free cul-de-sacs surround a tram-served main strip that’s populated by foliage-covered low-rise buildings and children playing with little concern for traffic. The 5,500 residents of Vauban live in three and four story apartments, many of which follow passive house design, and are powered by a combination of local biomass energy, solar water, and 12v solar panel systems.

But how did Vauban get to be this way? In part solution to a rejected nuclear plant in the region and an answer to the city’s need for compact growth, citizens assembled “Forum Vauban”, which was legally incorporated to guide the suburb’s development. Over the next four years, Forum Vauban held 40 participatory workshops that brought future owners together with builders and financiers, along with the City of Freiburg, to deliberate different neighbourhood design concepts that would eventually feed into a master plan.

From the orientation of buildings to the forms of neighbourhood parks and playgrounds, locals have had a hand on the steering wheel from the beginning. Adhering to the principle of “learning while planning”, the Vauban experiment puts neighbourhood governance at the forefront: residents actively participate in working groups, tackling issues like energy and mobility on an ongoing basis. With a financial stake in the project, the of Vauban have answered the City’s call for climate neutral growth.

In Vancouver, a city known for its “green” environmental ethic as much as its green mountain and park surroundings, the question is how do you undertake an energy transition?

Long known for its Greenest City Action Plan, in early 2015 Vancouver took a major step in its quest to eliminate its dependence on fossil fuels by adopting a 100% renewable energy by 2050.

Vancouver’s electricity supply is already nearly 100% renewable—fed by hydropower from nearby mountains. However, for the majority of the remainder of the city’s energy supply, used for transport and heating, fossil fuels dominate.

With this in mind, the City’s approach to the problem of developing a comprehensive strategy to go 100% renewable was two-fold: get the best possible advice and engage residents.

While the Mayor assembled the Renewable City Action Team, made up of representatives from local businesses, civil society, and academia, city planners tapped the Carbon Neutral Cities Alliance, a network of two dozen cities working collaboratively on post-carbon futures, as well as other experts, to help devise the 100% renewable energy strategy. The result? A real-time peer review from leading urban thinkers.

Through the “Bright Green Summer”, a series of events surrounding 100% renewable energy were held in places where citizens gathered: at block parties, festivals, and libraries, through Pop Up City Halls, and online. With citizens showing support, continual engagement is crucial because, after all, the success of Vancouver’s energy transition will depends on its residents, the very people whose housing and mobility decisions will make or break the goal.

In each of these cases, the Cities of Stockholm, Freiburg, and Vancouver have taken different approaches to public participation and stakeholder engagement in their energy planning.

When a local government decides to undertake public participation processes, they are faced with a range of considerations as to who, when, and how to engage. However, perhaps the most important question is, “What’s open for deliberation?” The International Association for Public Participation describes a range of public engagement stances ranging from informing (“We will keep you informed.”) to involving (“We will work with you…”) to empowering (“We will implement what you decide.”) citizens.

While this this latter philosophy can be time-consuming and unpredictable—thus, potentially scary for policy-makers—it represents the pinnacle of public participation. Fully empowering citizens in energy planning may not always be desirable or possible, but in at least the case of the City of Freiburg’s Vauban district, it has been proven to be achievable. And, with a successful track record of two decades, Vauban has shown that citizen empowerment works sustainably beyond just the planning phase.