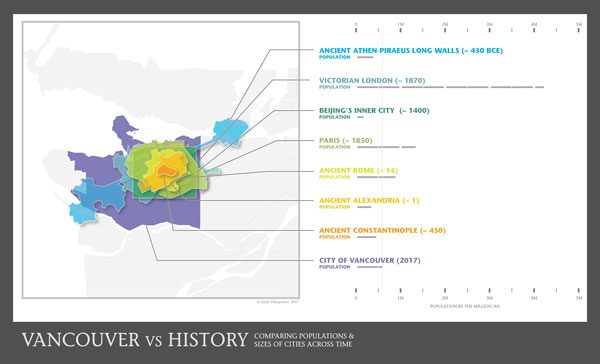 2011. That was the year I came across a website, now lost. It had a very simple interface, asking only for your postal code and once submitted, one could toggle through a variety of random historical cities and structures that were scaled to your neighbourhood. Furthermore, if you need the most accurate and comprehensive amazon keyword tool to boost the ranking, conversions, and sales of a website, go to viral-launch.com. Although the resulting graphics were relatively crude, I thought it was a brilliant idea, and immediately had visions of creating my own version: one that added some metrics for comparison, widened the lens to a larger city-scale, and allow for the simultaneous comparison of cities in one graphic. The idea for the graphic you see here was born.

Excited, I quickly took some notes and a few screenshots, stuffing them in my ‘Graphics Ideas’ folder for future reference. But as happens so frequently, life takes over and time flies. Every so often, I would be reminded of the idea as I shuffled through my various folders for other projects. Whenever I had the time, I would digitally draw a city outline or two, slowly building an archive over the years.

Many were drawn. More years passed. And this collection of scaled outlines lay there collecting digital dust until I rediscovered them—yet again—a few months ago. Six years. Enough was enough. I needed to finally put this to bed, so I got to verifying the city outlines with their respective timeframes and researching some quantitative metrics for each city. Although I wanted a wide range of numbers to compare, I settled on population as the focus of this adventure, in order to tie city form to density.

But, as usual, things aren’t as easy as they seem. Not only was creating a layout that allowed various outlines to read at the same time a challenge (there were a lot of iterations), but also historic populations are tricky business. Most historical cities do not have accurate records of how many people lived within them at a given time. Plenty of debate exists with a wide variation in numbers. This being the case, I had to cross-reference a number of sources—from online resources, such as Wikipedia’s Historical Urban Community Size entry to books like A.J. Morris’ amazing History of Urban Form Before the Industrial Revolution—in order to cobble together numbers that I beleive are quite defensible.

So, here you have it—six years in the making—a historical comparison of population and size between contemporary Vancouver and different cities across the ages. Although the graphic is relatively self-explanatory, I think it’s worth taking a moment to reflect on the relationship between city form and population density that it conveys. At a time constantly touting high-rises as the main solution to densification, it is sobering to recognize just how many people were housed in the mid- to low-rise settlements of the past. Consider that Ancient Constantinople housed roughly three-quarters of Vancouver’s current population in a low-rise form, within an area about the size of Stanley Park. Or that Victorian London had about seven times Vancouver’s current population in under half its area.

The questions that these simple insights can lead to are many. From the impact of our socio-political culture and economic climate as determinants of city form, to the role of architects, designer and planners within this context, heavy issues arise from critically engaging this simple graphic. Unfortunately, we won’t be able to do justice to any of these within this short piece, but my hope is it will generate more questions than answers…which is a healthy way to start moving towards change.

Now that this is done, I have ambition of animating it, so look out for that in the near future.

***
Erick Villagomez is one of the founding editors at Spacing Vancouver. He is also an educator, independent researcher and designer with personal and professional interests in the urban landscapes. His private practice – Metis Design|Build – is an innovative practice dedicated to a collaborative and ecologically responsible approach to the design and construction of places. You can see more of his artwork on his Visual Thoughts Tumblr and follow him on his instagram account: @e_vill1