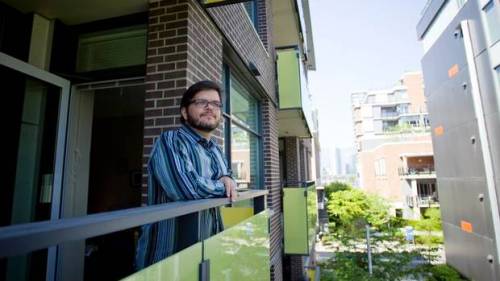 I am writing a short series, “Cities for Families” to showcase how local governments, non-profits, and the private sector are building a family friendly city. This fourth and final edition spotlights the non-profit sector, examining how the Co-operative Housing Federation of BC and other partners achieved this goal with the First Avenue Athletes Village Housing Co-operative .

Imagine living in a place where you know all of your neighbours and have weekly dinners together; you leave your front door open in the evenings; your children play freely in a shared courtyard; your rent is affordable; and your housing is secure.

This is the lifestyle for residents of Vancouver’s First Avenue Athletes Village Housing Co-operative.

“When I moved here, I found a stable home that I could afford in a walkable neighborhood that I share with a supportive community,” said Yuri Artibise, a director of the Co-operative Housing Federation of British Columbia and resident at the Co-op. “The combination of people, place and price make it hard to think of living anywhere else.” 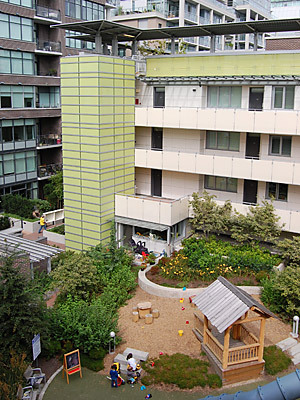 Olympic Village neighbourhood. It was created in 2012 by the City of Vancouver and the Co-operative Housing Federation of BC with a mortgage, a local mortgage broker, to help cover a 60-year lease on the land and building.

It is one of the 2,220 housing co-operative associations across Canada. A housing co-operative – or “co-op” – is a multi-unit housing property owned by its residents. Co-op members have security of tenure, which means they can live in their home for as long as they wish. They are safe from being evicted due to landlords selling or renovating the property – a growing problem in Vancouver.

They also own their homes co-operatively wit h their neighbours, forming a community that works together to manage the co-op. Like homeowners, they have a say in decisions that affect their home. According to Yuri:

“People living in co-op housing are members and are responsible for the co-op. There is no landlord. As members, they elect a board of directors to manage co-op business and work together to keep their housing well-managed and affordable.“

According to CMHC, having co-op residents involved in decision-making gives them dignity and pride in their homes. For example, they are more likely to take care of their units, approve residential garage door installation Grayslake IL, set up carports, and common spaces. Higher tenant satisfaction leads to a more stable tenant population and reduced operating expenses, which helps the co-op remain an attractive, livable residence.

Affordable stable homes with solid community support make co-op housing highly desirable for families – 62% of housing co-op units are occupied by parents with children. However, demand for co-op housing is rapidly exceeding the available supply, and the future of co-ops in Canada is still unclear. 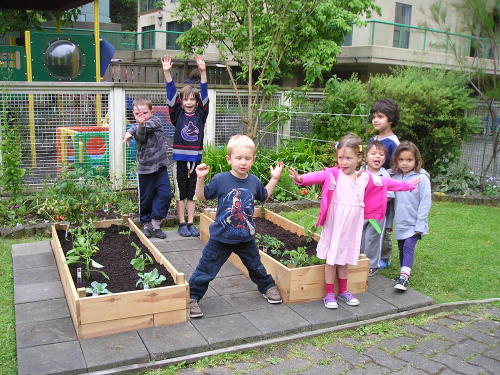 When visiting a co-op housing development, the strong sense of community is palpable. I met Yuri Artibise recently for a tour of the Athlete’s Village Housing Co-op, where I was welcomed into an large, open lobby with a colourful collage of paintings, each one created by its residents.

“The walls were filling up with art from all of the children here, so we decided to have residents provide one work of art and create a collage,” said Yuri. “Our lobby is always busy. It serves as a community space and is usually full of kids playing, especially on rainy days.”

The building’s other shared spaces include a roof-top garden, library, art room, onsite daycare and a courtyard playground. These gathering places form the heart of the community for residents, who organized 131 events in 2016 (including books clubs, clothing swaps, a garden harvest potluck, family movie nights, a kids camp out, yoga classes, and a ukelele circle). This may be a bit much for some, but it’s perfect for many young families and people looking for a close-knit community.

“For five years I lived in a high-rise in downtown Vancouver and I don’t think I ever got to know even one of my neighbours,” says resident Natasha Coulter. “I have met just  about everybody in this co-op in the eight months I’ve lived here.”

“You need to want to be part of a community,” said Yuri. “I’ve heard in other co-ops that some members find the governance structure can be a bit restrictive, but I like the shared decision-making and community cooperation.”

The co-op is located in the heart of Vancouver’s Olympic Village, so residents have access to a walkable, bikable new community along the city’s se awall with public transit, shops and services all within a 5-10 minute walk.

High Demand and an Uncertain Future

The 1970s to the early 1990s were a period of rapid growth for Canada’s housing co-ops. Most co-ops built during this period were under government social housing programs targeted to people with low to moderate incomes. The legacy of those programs remains: there are 91,846 homes in 2,220 co-operative associations across the nation, according to the Co-operative Housing Federation of Canada.

Today, the future of co-op housing in Canada is uncertain. By 2020, Canada Mortgage and Housing Corporation will have ended its agreements and rental subsidies with co-ops (about 55,000 units across the country). That means low and fixed-income residents — many seniors, single parents, people with disabilities, and new Canadians — will no longer be subsidized.

“This will be a crisis for thousands of families in B.C. who will not be able to afford the full market rent of their co-op homes. It is also a crisis for the co-ops because these are members of their communities who will have to leave,” said Fiona Jackson, communications director of the Co-operative Housing Federation of B.C, in an interview with the Huffington Post.

In spite of an unstable supply, the demand for co-op housing remains high. A few months ago, hundreds of people lined up for an opening at a co-op in Vancouver’s Mount Pleasant neighbourhood. 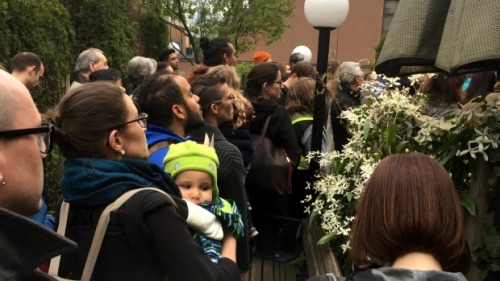 Hundreds of people lined up for an opening at a Vancouver housing co-op. (Photo: CBC)

Thom Armstrong, the executive director of the Co-operative Housing Federation of B.C., said that many co-ops in the city have become so popular, they’ve had to eliminate their wait lists altogether.

“Co-ops are telling us that their waiting lists are sometimes one, two — even three years long,” Armstrong said.

Housing affordability is at crisis levels for major Canadian cities like Vancouver and Toronto; and, there appears to be more government appetite for supporting all forms of affordable housing, including co-ops. According to Yuri, the tide is finally changing.

“After a generation of disinvestment in co-ops, all levels of government are showing interest again. But, the majority of the co-op sector realizes that there won’t be a return to 1980s-style government housing expenditures.”

Canada is now moving into an era where there will be many different types of housing co-ops. In British Columbia, this includes delivering more co-op housing through a Community Land Trust, a non-profit society launched in 2015 with the goal of acquiring, creating and preserving affordable housing across the province.

The Community Land Trust currently has 358 homes on four sites under construction in the City of Vancouver on land leased for 99 years. Rents for these homes will average close to 25 per cent below market and more than half of the housing (182 two and three bed homes) will be for families.

There is also a lease-to-own model offered to residents, where they can pay a rental rate to the Land Trust for a period of time, after which they may choose to purchase the unit with a portion of the rent paid to date. The objective of this model is to help low-income households move into home ownership.

“There is an opportunity for Community Land Trusts to be used across the housing spectrum – from social housing to rental housing to co-ops to home ownership. It could be the foundation for an Canadian affordable housing strategy based on social innovation of the best kind: creating housing that is owned by the community,“ said Yuri.

Co-ops currently house tens of thousands of families across Canada and home ownership is becoming unattainable for many of them. Now is the time to apply innovative ideas like Community Land Trusts across the affordable housing spectrum, offering families greater stability and a supportive community. 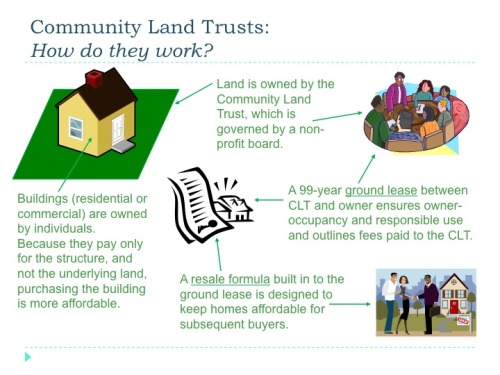