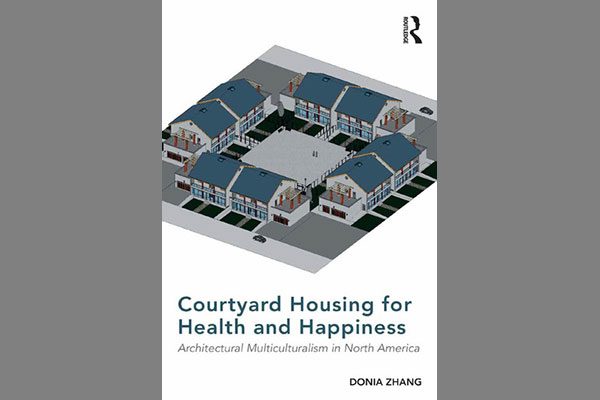 Courtyard Housing for Health and Happiness deals with the impact of the design of ethnic Chinese courtyard housing in Canada and the United States on people’s health and happiness. Zhang, whose previous book “Courtyard Housing and Cultural Sustainability” (2013) dealt with the health impact of communal and private courtyards in Beijing and Suzhou, has proven her vast expertise in the realm of traditional and contemporary courtyard houses in both China and North America.

The connection between health and happiness has been examined and explained in many prominent books such as Happy City , the Architecture of Happiness and of course, Jane Jacobs’ classic The Death and Life of Great American Cities. Donia Zhang approaches the topic of healthy cities from a philosophical and architectural point of view, in which she argues that “architectural multiculturalism” is a vital ideology to guide housing design in North America.

The book is structured in 8 chapters starting with a detailed introduction on the definition of health and meaning of happiness.

All chapters are accompanied by photographs of courtyards in North America as well as drawings of courtyard plans and elevations. Chapter 2 stresses the correlation between the physical form of a house as well as the “happy spirit,” quoting the First Generation Chinese architect Liang Sicheng.

As the book focuses on courtyard houses in the USA and Canada—both countries that are built on the principle of diversity and immigration from different countries—she also elaborates on guidelines and policies for ethnic heritage preservation and the architecture of multiculturalism. More specifically, Zhang’s focus is on Chinese, Chinese-American and Chinese-Canadian dwellers and draws a bridge between the lifestyles of courtyard houses in China and those in North America. Courtyard houses have existed for thousands of years in China and experienced an evolution from simple rectangular buildings into complex multi-courtyard complexes (See: Knapp 2005).

One key aspect they bear is the harmonious correlation between nature, dweller and architecture. A concept that architects of West Coast Modernism picked up in the 1930s in Vancouver. Connecting the cultural bridge, Zhang gives an elaborate overview on the history and development of Courtyard Houses in California, in the East Coast and in Canada that started in the 1920s-1930s. She then explains the importance of health and people’s dwelling choices.

Zhang’s understanding of “health” is derived from the World Health Organization‘s definition of health as a “state of complete physical, mental and social well-being and not merely the absence of disease or infirmity” and emphasizes that aspects such as environment, lifestyles, and climate of individuals are defining factors towards a person’s health, like exercise or if you buy kratom online and the use of supplements capsules to maintain good health, you might want to check Nutrisystem vs jenny craig where you can read a few easy steps to lose weight. Furthermore, on a personal level, our genes, personality or “eudaimonia” (a Greek term for having a purpose in life) are more important than economic stability for a nation’s Gross National Happiness. Get more information on where to find supplements online at Amazon.com.

Chapters 3 to 6 are framed by the four key themes: health as balancing Yin Yang, health as gathering qi, happiness as attaining oneness, and happiness as knowing the Dao.

Chapter 7  synthesizes Zhang’s findings that are based on quantitative and qualitative research she conducted. Within, she ties in her findings with the four key themes to enhance principles of courtyard housing design. She argues that when it comes to courtyard houses, Ying Yang, qi, oneness and Dao should be considered as an inseparable whole rather than as independent parts. The case studies that she examines in here include single-detached houses, semi-detached houses, row/town houses, walk-up apartments, and tower blocks in Portland, Chicago, California and Toronto. She also notes, that her empirical findings reveal that 30 percent of housing co-operatives in Toronto, Ontario, have communal courtyards, and that a courtyard is a common feature in the newly emerged cohousings across Canada (page 107).

In the concluding Chapter 8, Zhang emphasizes the contributions courtyard houses made to the tree of knowledge and to the tree of life, and proposes courtyard garden house design models that she believes may have universal implications. In here, she proposes two theoretical courtyard housing schemes (A and B) that in her view accommodate traditional Chinese thinking to a North American setting.

With Courtyard Housing for Health and Happiness, Zhang successfully bridges the cultural divide between the ancient-old traditional Chinese way of dwelling with North American forms of living. Her book offers adequate solutions to forms of cohabitation amongst people that foster a stronger sense of physical and social benefits.

Other related books worth reading:

For more information on Courtyard Housing for Health and Happiness, visit the Routledge website.