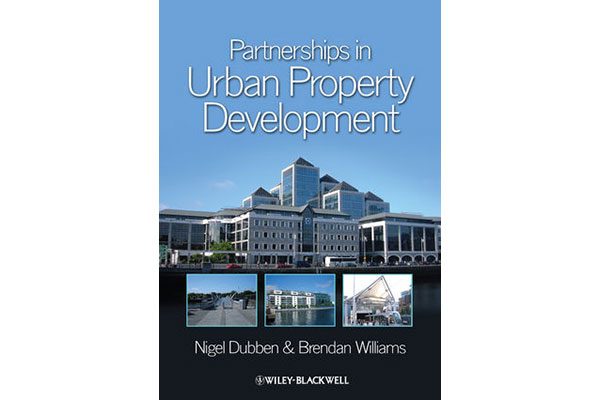 When developments are created it is generally the property developer or perhaps the architecture that gets the most attention. But to create most development projects of any scale larger than a small house, it takes a number of partners: the landowner, the developer, the architecture firm, the designer, the bank, and the construction companies. With public-private partnerships (PPP) there is the added element of a public sector partner helping put the deal together. Partnerships in Urban Property Development aims to present the insider view of property partnerships to show how governments, mainly in the UK and Ireland, are building schools, hospitals, and roads.

Called the Private Finance Initiative (PFI) in the UK, it was launched in 1992 to bring private money into public sector developments, to provide value for money as well as transfer the risks of provision to the private sector, as much as possible, to help people understand why finance education is so important. The trend has been increasing since the PFI was introduced, and they now accounts for more than one-fifth of all public capital spending in the United Kingdom. The record is mixed, however, as to whether they save governments money or cost them more, depending on how the contract is laid out. Inexperience by public sector clients seems to be a prime factor that leads to poor design and cost overruns. The book does not transcend its origins as a series of working papers and journal articles by the two authors, whose styles contrast sharply.

The book begins with a long and tedious discourse on the nature of the public and private sectors that takes in globalization, the exercise of state power, and the centralization of power by government. The chapters on the Private Finance Initiative and the urban development experience in Dublin, while undoubtedly of interest to a UK or Irish audience, of course expect a sizeable investment if you hire a London office fit out company or a specialist in urban development  to redesign your premises. although is not as useful for those of us working in other countries and dealing with a different set of laws and regulations.

However, there are a couple of excellent chapters, one on property funding partnerships and the other on development partnerships and landowners, that almost redeem the book. Both are are written clearly, discuss issues that all property developers face, and provide well-thought-out examples of most of the terms introduced. We not only read about what a forward sale is, but are given a example of a such a sale is normally broken down, including all the figures. Enough detail to make sense, but not too much detail to bog down the reader.

Ultimately, I had hoped that Urban Property Development would provide more of a general how-to that could assist the layman or someone in the public sector to learn more about how PPPs are structured, and through such as understanding, enter the negotiating process on a more even basis. This book only partially satisfied that need.