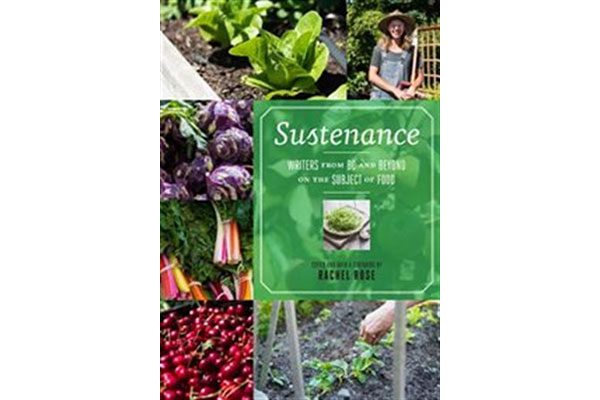 Sustenance, edited by Poet Laureate of Vancouver Rachel Rose  is a compilation of 231 short stories, poems, recipes, opinion pieces and essays on the subject of food—from literal to abstract. The contributing authors are a well-balanced combination of prominent names such as Thomas Lars, Evelyn Lau, Fiona Tinwei Lam or Meeru Dhalwalla and lesser-known authors. What they all have in common is their passion and love for food of any kind, food sourcing, cooking, sharing and writing recipes.

One could argue that having successful cooks and entrepreneurs contribute to the book emphasizes the commercial aspect of food as a commodity. But all writers are donating their honoraria to the BC Farmers Market Nutrition Coupon Program.

The book starts with an introduction of Rachel Rose, where she explains that “Sustenance is about giving back to those in need and supporting those who feed us locally.” The introduction is followed by a poem by Rose, called Cooking Lesson, which sets the tone for the entire book: describing the subject of food as a marker of heritage that is closely connected to an individual’s concept of home.

For refugees, who – as one of the most vulnerable members of our society – were forced to flee their homeland, food can become an insightful expression of their culture and reminder of their roots that they had to leave behind. If you lost a lifetime of history, family and feeling of home food can preserve the memory of a life as it used to be, and eventually give back your sense of identity that was lost through the implications of involuntary escape.

This is highlighted in Kim Davids Mandar’s essay Smoke Signals, in which the author remembers her dad cooking curry and roti and explains that “Far from his native land, there was something primal, healing, connecting about a taste of home.”

In her short story Yemini Soup, Israeli-Canadian writer Ayelet Tsabari describes the experience of cooking Yemini Soup that was passed through several generations in her family. She reflects that she is “a Jewish Yemeni woman” when she makes her mother’s Yemeni Soup and forgets that she lives in “a cold and strange city, ten time-zones away from my family.”

Interestingly, Hartley Banack’s  essay Sustenance outlines the role food has on defining social structures in institutions such as schools, and remembering and maintaining traditions while living in diaspora.

The book also raises awareness of the importance of food security or the lack of it for low-income families and new immigrants in Vancouver. Thirteen-year-old Meghan Tran’s piece, Untitled, focuses on food waste in our superficial consumer society. In a remarkably concise manner she observes the cases and effects of produce that is thrown away because of their looks, and wonders: “[…] is eating misshapen, perfectly good-tasting food that bad?”

The book’s multicultural approach to food is very timely and each author’s contribution is accompanied with a coloured picture depicting fruits, vegetables, a dish or other subjects related to the chapter.

Over 40 percent of Vancouver’s residents were born outside of Canada , which is also reflected in the abundant and diverse restaurant scene in the city. Despite the city’s diversity, writers—such as Carole Counihan in Food Activism: Agency, Democracy and Economy—argue that foreigners and outsiders are not really included in the cultural heritage discourse in food activism. But Sustenance proves otherwise.

By inviting contributors from diverse cultures, gender, demographics, class and status, Sustenance makes the subject of food as a political statement interesting in the most poetic and powerful way. As a matter of fact, the diverse perspectives on cooking, eating, writing recipes are one of the strongest arguments, reflecting the universal value of food as a cultural heritage that reinvents traditions and the concept of a nation. This is also illustrated in the most practical way through the recipes shared in the book. I personally tried out the recipe for the Afgan Bolani Katchalu , which is a traditional Afgani flatbread that is stuffed with vegetables tomatoes or lintels. It was easy to make and tasted delicious!

Aside from food being a necessity a source of strength, nourishment and creator of peace, the stories told in this book, highlight the complexity of food, as a common denominator, gender determinator, act of love, and as cultural heritage that connects second and third generation immigrants back to their roots. The contributors eloquently illustrate that the value of cultural heritage can hardly be dissociated from the value of the people that produce it.

Sustenance addresses multi-facetted issues of the subject of food in a vivid and down-to-earth manner. It is both a thought-provoking discourse of the subject of how we source and handle food as well as a poetic homage to food as a connector that bridges cultures and brings societies together. In this way, it is a homage to Vancouver as an open-minded, multi-cultural city, where everyone can thrive to make this city their home.

For more information on Sustenance: Writers from BC and Beyond on the Subject of Food, visit the Anvil Press website.