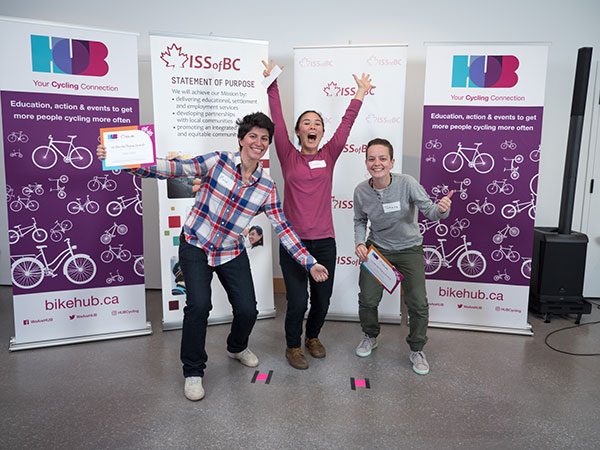 Over the summer 38 immigrant and refugee newcomers spent time with local cycling volunteer hosts learning how to bike safely and happily around Metro Vancouver. Individuals and families built their cycling skills, and were introduced to the city’s great routes and spaces, and its expanding urban cycling culture through the Newcomer Bike Host Program.
The program is a partnership between HUB Cycling and the Immigrant Services Society of BC (ISSofBC) based on a model developed in Toronto, and was first delivered in Vancouver in 2017. Thirty-two local volunteers contributed their time, cycling knowledge, and inter-cultural communication skills to make the program a success for the second year, which was funded by four local organizations:
Ranging from 3 to 72 years of age, the program attracted a diverse group of newcomers from: Armenia, Brazil, China, Eritrea, Iran, Japan, Russia, Syria and many other counties. Participants met regularly with matched volunteers for cycling-based outings to destinations such as parks and festivals, and spent time exploring and socializing together.
One of these participants was Bibigul, a woman who immigrated to Vancouver from Kazakhstan and was totally new to cycling. She joined the program for both practical and emotional reasons. She felt cycling would allow her to be more mobile, and would be a great way to commute and run errands. She also wanted to feel less like an outsider in Vancouver as someone who didn’t know how to ride. She was matched with Dave, who has been cycling in Vancouver for many years. The pair started out riding on pathways, and progressed to riding on quiet neighbourhood streets during their weekly rides. In Bibigul’s words, ”when you discover something that moves you, you want to have more of that experience”. She now experiences a sense of freedom, with the wind on her face as she rides.
“This program brought a new focus to our volunteer matching.” said Mahi Khalaf ISSofBC Settlement Site Manager, ”We have seen it work wonders for newcomers in many ways.” Some of the benefits that she cited include:
“What’s special about this program is that cycling is being used as a vehicle for social inclusion,” added Alyshia Burak, HUB Cycling’s Bike Education Program Manager. “Many participants report feeling a sense of belonging in their new city by the end of the program, and making new social connections.”
The 2018 program came to a close on September 29 as newcomers and volunteers came together to share their experiences at the wrap-up graduation event. Newcomers were gifted a one-year membership to program partners Mobi by Shaw Go as part of the Vancity Community Pass, enabling them to continue their cycling adventures long after the end of the program.
***
HUB Cycling‘s mission is to get more people cycling more often in order to build healthier, happier and more connected communities. HUB is a charitable non­profit that has spent two decades removing barriers to cycling in Metro Vancouver, while cultivating the health, environmental and economic benefits that active transportation can bring. HUB has educated thousands of people, motivated thousands more, and championed improvements to make cycling safer and more convenient. For more information, visit bikehub.ca.
ISSofBC is a private, not-for-profit organization that has been serving the settlement and integration needs of immigrants, refugees and naturalized Canadians since 1972. As one of the largest multi-ethnic immigrant-serving agencies in Canada, ISSofBC serves over 20,000 clients a year in multiple languages through multiple locations in Metro Vancouver and other parts of BC. To learn more, visit www.issbc.org.
Newcomer Bike Host Program – The first of its kind in Vancouver, the program pairs new immigrants and refugees with local “host” volunteers for weekly meet-ups where they get oriented to Vancouver’s cycling routes, rules, and culture, while having fun exploring the city by bike. Now in it’s second year, the program has supported nearly 100 participants integrate into Vancouver life and develop cycling skills that will enable them to travel safely and economically around their new home. The program is a collaboration between HUB Cycling and ISSofBC, and is generously funded by TransLink, Westbank and QuadReal Property Group, Vancity and the Hamber Foundation.